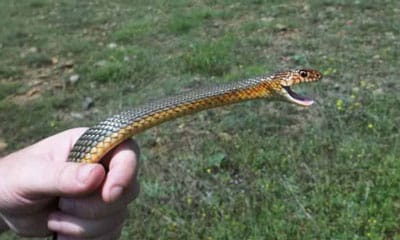 Reptiles have made a comeback in Butrint and throughout Albania.

In 1959, Soviet leader Nikita Khrushchev was invited by Albanian dictator Enver Hoxha to visit Butrint, the site of ancient Illyrian, Greek, Roman and Venetian ruins. Concerned that Khrushchev might encounter wildlife during his visit, caretakers of the archaeological park prepared by setting fire to beehives and dumping toxic chemicals into the marshes to kill off any snakes. One person who witnessed the aftermath described dying snakes hanging from ancient statues and writhing in the water that filled an abandoned amphitheater. 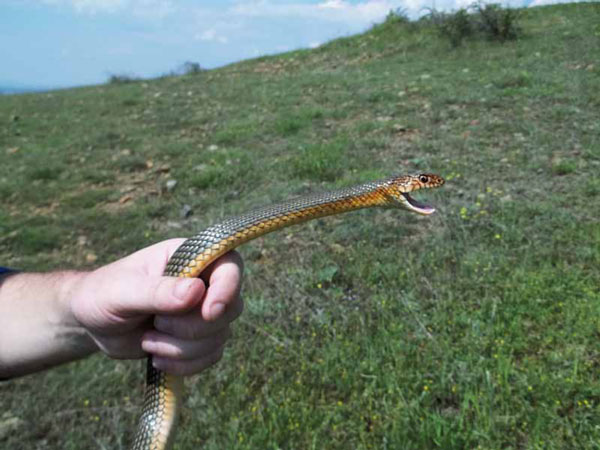 This large Caspian whipsnake (Dolicophis caspius) was captured as it was chasing down a green lacerta.

Despite the devastation to the ecosystem, reptiles have made a comeback in Butrint and throughout Albania. The Albanian people are making a similar comeback. After several decades of isolation under a totalitarian communist regime, this small but geographically diverse Balkan country is emerging from the other side of the Iron Curtain. Once shrouded in mystery, Albania is beginning to share its many treasures with curious visitors: delicious cuisine, largely unexplored historical sites, and a smorgasbord of wildlife. Large and impressive carnivores, such as the Eurasian lynx, gray wolf and brown bear — which have all but disappeared from Western Europe — still roam the Albanian landscape (on a previous visit to the country in 2009, I was shocked to encounter a majestic and highly-endangered Balkan lynx, Lynx lynx martinoi). The country’s varied landscapes are also home to a wide variety of beautiful and fascinating herps.

My father Tom and I traveled to Albania in May 2011 in search of all these things. We began our journey in the sprawling capital of Tirana, a chaotic yet charming city of more than 600,000 people. Its large parks provide habitat for smaller species of reptiles and amphibians. Visitors can catch a cable car to the top of nearby Mount Dajti for a hike through ancient beech forest, or stroll along the city’s artificial lake, where we spotted plenty of three-lined lacertas (Lacerta trilineata) and bright green Albanian water frogs (Pelophylax shqipericus) scurrying and splashing along the grassy shore. After dark, an energetic little Mediterranean house gecko (Hemidactylus turcicus) entertained us as we watched it leap through the foliage around an outdoor café. 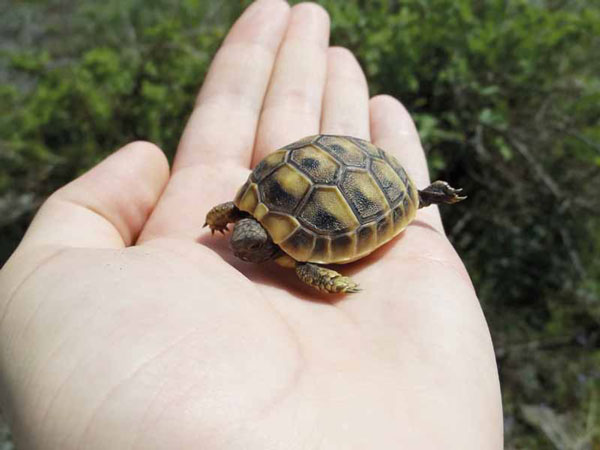 We traveled on to Lake Ohrid in the eastern part of the country before catching a public van to the village of Korçë, where we met up with our guide, Edmond Themeli. An avid herper and naturalist, Edmond led us through the breathtaking scenery of the surrounding hills in search of reptiles.

No sooner had we begun our trek under the hot midday sun when a noise in the bushes brought us to an abrupt stop. A beautiful adult Hermann’s tortoise (Testudo hermanni) had caught our attention. Always alert, it did not pull into its shell when picked up, but flailed its limbs while we took some pictures. By the end of the day, we had encountered at least 12 of these chelonians, which were found scuttling along vegetation-choked rock piles in search of grasses, shoots, berries and fungi. A flooded ditch was home to a large European pond turtle (Emys orbicularis), and a young grass snake (Natrix natrix) that quickly vanished into the murky water.

The most thrilling reptile find of the day came when I glanced across a clearing to spot a European green lizard (Lacerta viridis) tearing across the landscape. It was being pursued by a very long Caspian racer (Dolicophis caspius), which had raised the entire front half of its body straight into the air. The scene would have made a wonderful photograph, but as soon as the snake saw us, it took off in the other direction. Edmond quickly chased down the glossy, wide-eyed specimen for some close-up photos, and it struck repeatedly — typical behavior for members of its genus.

Reptiles were not the only exotic creatures we found in the hills that day. My father was thrilled to find a European hedgehog (Erinaceus europaeus) tucked among the roots of a large thorn bush.

Reptiles, Ruins and Renewal in Albania

Situated on the southern shores of Albania’s Adriatic coast, the UNESCO World Heritage Site of Butrint — the scene of the mass snake-poisoning that preceded Khrushchev’s visit — lies just outside the small city of Sarandë. This site was home to several civilizations, including the Illyrians, Greeks, Romans and Venetians, each of which left its mark in the splendid ruins. Today, the large expanse of forested land surrounding Butrint has been designated a national park, and it supports a wealth of reptile species. The shores of the adjacent Vivari Channel serve as an important nesting site for the endangered loggerhead sea turtle (Caretta caretta). 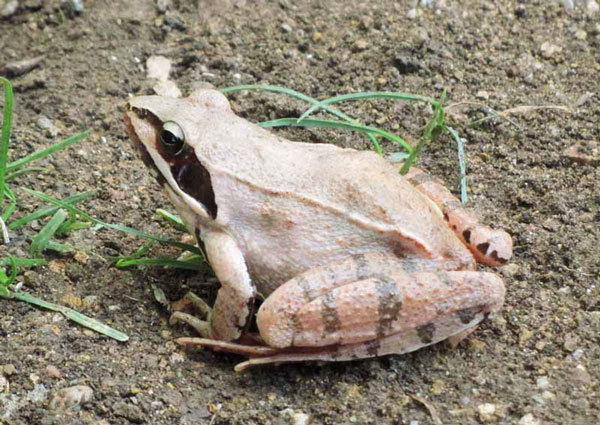 This handsome agile frog (Rana dalmatina) was spotted in Dajti Park, just outside of Tirana. Bearing a superficial resemblance to the North American wood frog, this adaptable species is known for its ability to cope with excessively hot, dry conditions.

Herps and other animals occupy the abandoned temples, churches and city walls of Butrint. Piles of European pond turtles were sunning themselves on the steps of a flooded Roman amphitheater, and brown dice snakes (Natrix tessellata) zipped into the reeds of the surrounding brackish water as we passed by.

Edmond uncovered the most memorable finds of the day. A very robust scheltopusik (Pseudopus apodus) attracted a crowd of fascinated park visitors as we handled it for photographs. Edmond explained to them in Albanian that its external ear openings and moveable eyelids identified this as a limbless lizard rather than a snake. My father and I agreed that the image of this amazing creature slithering along the foundation of a sun-washed stone wall would be difficult to forget.

A trio of tiny, hot-pink European blind snakes (Typhlops vermicularis) were the perfect way to close another chapter of herping in this small and storied land of mountains, valleys and wetlands. All three were found beneath flat stones, most likely searching out their typical prey of ant larvae and termites.

Fire salamanders, Tartar sand boas and common European vipers are among the reptiles and amphibians my father and I hope to encounter on a future visit. As Albania continues to shake off the last effects of a brutal dictatorship, Edmond Themeli and others who are passionate about their country’s natural heritage are working to ensure that these and other species will be protected and thrive so they can be enjoyed by generations to come.

David Banchich is an anthropology major at Canisius College in Buffalo, N.Y. He inherited his love of reptiles and amphibians from his father, Tom, and has been field herping since he was 8 years old. He has observed the herpetofauna of many U.S. states, as well as Albania, Puerto Rico, Malaysian Borneo, Rwanda, Egypt and Australia.