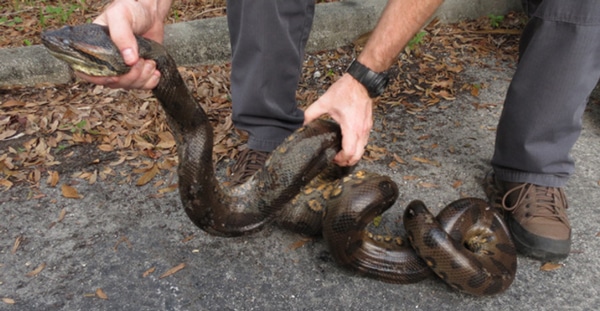 The snakes are presumed to be pets at one point

Two green anacondas (Eunectes murinus) were recently discovered in Florida, not in the Florida Everglades, but in Florida’s Atlantic coast in Melbourne, about halfway up the coast. Their discovery has Florida Fish and Wildlife officials concerned. 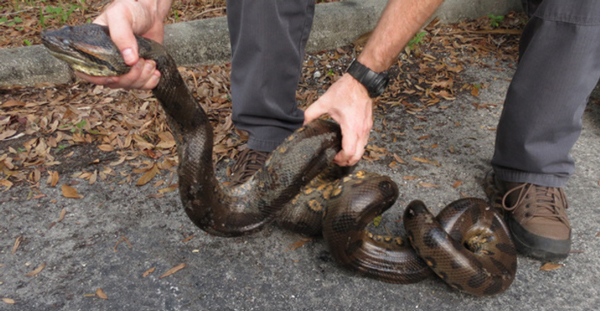 This green anaconda was found in Melbourne, Fla.

The 8-foot, 8-inch constrictor was turned over to the Florida Fish and Wildlife Conservation Commission February 3 after it was captured in a neighborhood in the city. Another green anaconda was captured in the same vicinity in November, and wildlife officials speculate the snake was a pet as it had just eaten a domesticated rat.

According to the FWC, neither of the snakes had an implanted microchip, as required by law.  Anyone who has information regarding these snakes cal call Florida’s Wildlife Alert Hotline at 888-404-3922 or email or text to Tip@myFWC.com.

Green anacondas are large, heavy-bodied snakes that can grow to about 15 feet give or take a few feet. This snake is probably the most widely mythologized of the large constrictors due in part to old television shows and movies that depicted them as massive, monstrous reptiles that devour anything that moves. They have been reported to be, erroneously, the largest snakes in the world. They aren’t. In the Americas, they are, unless you count the invasive Burmese pythons of the Florida Everglades.