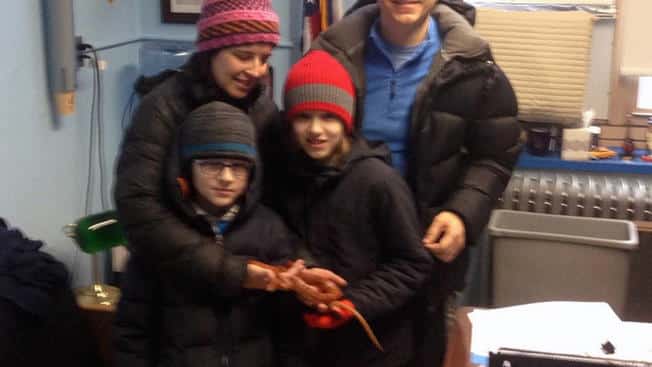 A pet corn snake Pantherophis guttatus (Elaphe guttata) that survived in a Brooklyn, NY brownstone for more than 8 months was reunited with

A pet corn snake Pantherophis guttatus (Elaphe guttata) that survived in a Brooklyn, NY brownstone for more than 8 months was reunited with its family after a neighbor reported the snake to police.

The family of the corn snake at the NYPD's 78th precinct is happy that their pet snake was found.

The 3-foot long snake, named Flame escaped its enclosure in June, and showed up in a brownstone a few doors down on the night of February 6. According to DNAInfo, the woman who was living in the apartment, Minerva Fernandez, is terrified of snakes. The New York Police Department’s 78th precinct was called in to capture the snake.

The precinct’s commanding officer, Capt. Frank DiGiacomo took a personal interest in the case as his pet snake escaped its enclosure years ago and was never found.

The 78th precinct tweeted their find on Twitter and put up posters around the block in an effort to find the owners. On February 7, the owners showed up at the precinct with photos of Flame.

Corn snakes are one of the most popular snakes kept as pets due in large part to their calm demeanor and ease of feeding. They grow to about 3-5 feet in length and can live well into their teens if not longer.