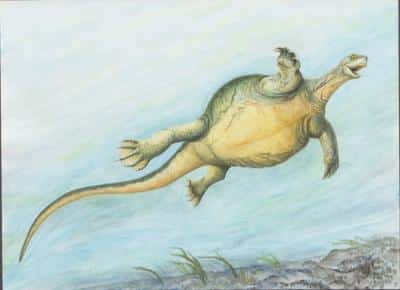 The shell-less turtle, named Eorhynchochelys sinensis was found in China.

Researchers have discovered a fossil turtle that lived more than 228 million years ago that was Frisbee-shaped, had a beak and wide ribs but had not yet formed a shell that is seen on the reptiles today. 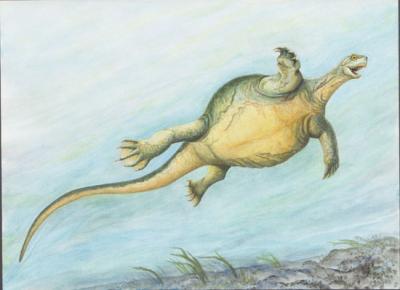 The shell-less turtle, named Eorhynchochelys sinensis was found in China.

The shell-less turtle, named Eorhynchochelys sinensis was first discovered in the Guanling district of Guizhou province in southwestern China. Its name, Eorhynchochelys translates to dawn beak turtle, while sinensis means from China.

Because the turtle had a beak but not a shell, the researchers say it is a sign of mosaic evolution, whereby body parts such as beaks and shells evolved independently, and at different rates, of each other.

"This creature was over six feet long, it had a strange disc-like body and a long tail, and the anterior part of its jaws developed into this strange beak," Olivier Rieppel, an author of a paper in Nature detailing the new species. Rieppel is also a paleontologist at Chicago's Field Museum. "It probably lived in shallow water and dug in the mud for food."

"The origin of turtles has been an unsolved problem in paleontology for many decades," Rieppel said in a statement released by the museum. "Now with Eorhynchochelys, how turtles evolved has become a lot clearer."

The skull of Eorhynchochelys was so detailed that the researchers were able to solve another piece of the puzzle of turtle evolution. Previously, scientists were unable to determine where turtles resided on the evolutionary reptile tree, whether they were diapsids, in the same evolutionary group as lizards and snakes with two holes on the side of their heads, or if they were anapsids, which don't retain those openings. The skull of Eorhynchochelys showed it was diapsid.

"With Eorhynchochelys's diapsid skull, we know that turtles are not related to the early anapsid reptiles, but are instead related to evolutionarily more advanced diapsid reptiles. This is cemented, the debate is over," Rieppel said.

The complete paper, "A Triassic stem turtle with an edentulous beak" can be read on the Nature.com website.