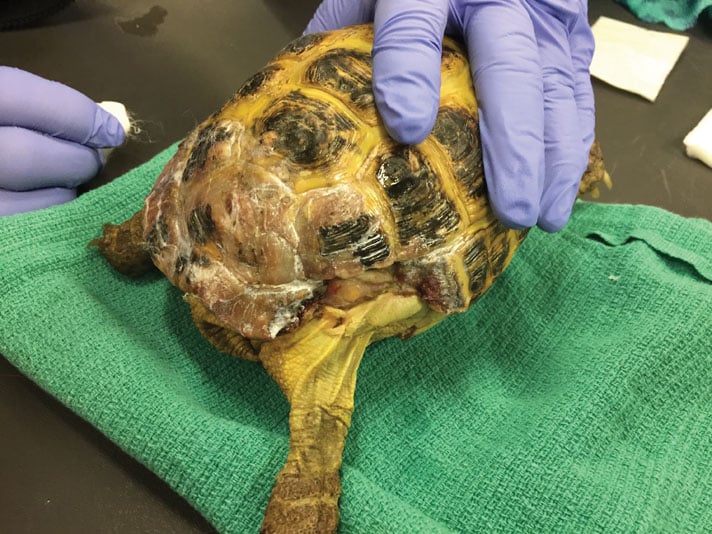 How A Russian Tortoise Survived A Dog Bite

An English mastiff bites a Russian tortoise and a vet team saves him just in time.

There probably haven’t been more mismatched opponents since David fought Goliath. On one side was a small, female Russian tortoise named Kali, weighing in at less than a pound; on the other, an English mastiff weighing just under 100 pounds. The tortoise was a defensive expert that could retreat within its tough shell. The mastiff was more offensive minded, with a bite force of 556 pounds. Nevertheless, these two — the tortoise and the mastiff — “tangled” one day and the results were terrible. 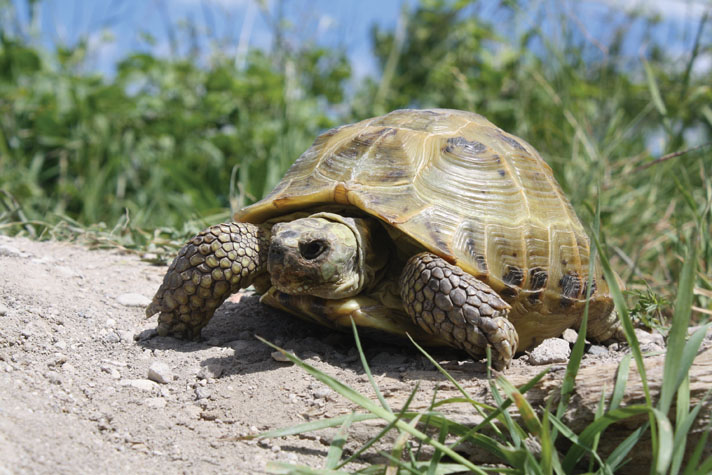 When keeping Russian tortoises outside, remember that they are capable of climbing. Be sure outdoor pens are escape-proof.

At first, when Kali’s owner found his blood-soaked pet in the jaws of the mastiff, he was certain she was dead. So certain, in fact, that it was only when he was preparing to bury the tortoise in a corner of his garden that he detected movement from within the cardboard box in which he had placed Kali to await burial.

Upon this sign of life, Kali was rushed to a veterinarian who pronounced that there was nothing he could do. Unwilling to give up, Kali’s owner then drove his injured pet 200 miles to a vet who had offered a glimmer of hope — but only a glimmer. 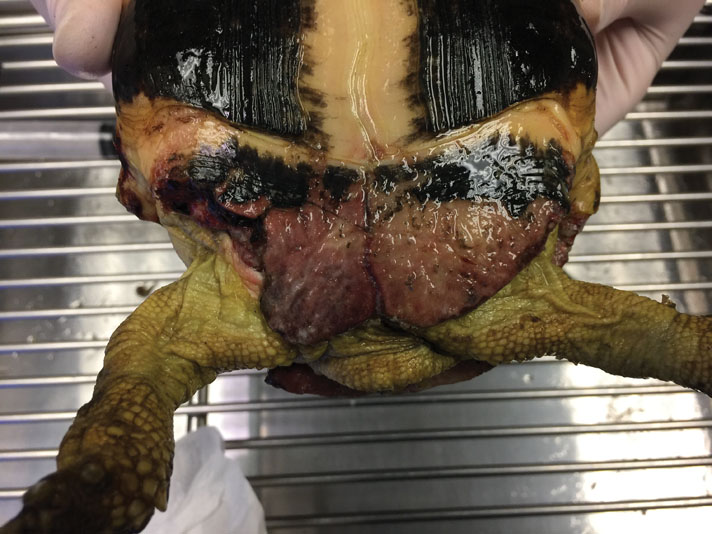 Pictured is the dog bite damage to Kali’s plastron.

“For one thing,” she said, “it’s difficult to get them into the clinic, especially the male. We had to develop some creative transport methods, including the use of furniture dollies. The process is further complicated by the risk of serious injury if one of these giants were to fall on you.” Eventually, Dr. Miller decided the best strategy was to make house calls, and “although the Aldabra tortoise is not aggressive, it will react to a needle, for instance, when drawing blood. Sometimes it takes four or five people to hold it down.” 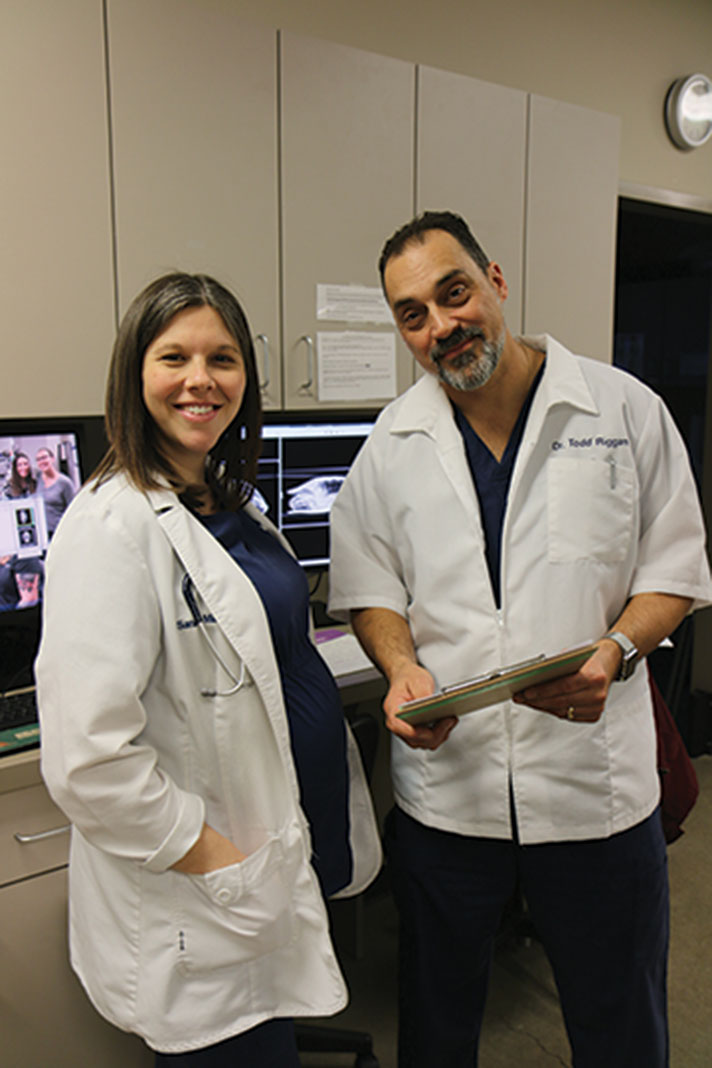 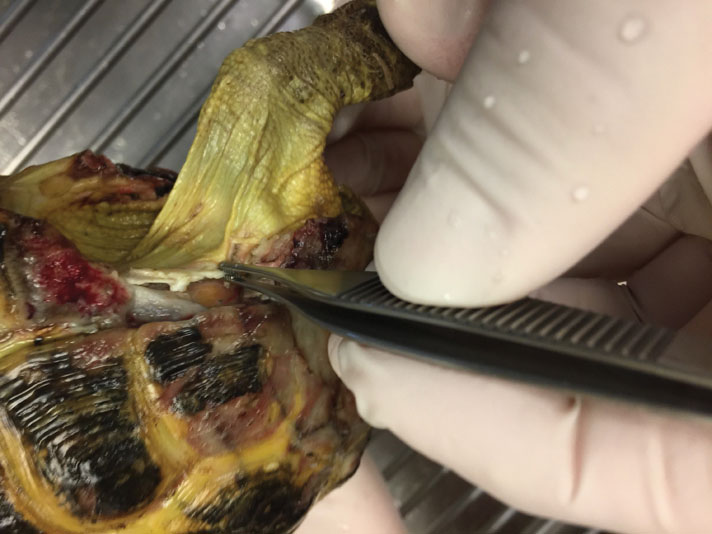 Upon arrival at White Rock, Kali was examined by Dr. Miller and the hospital’s owner, Todd Riggan, DVM, DABVP-Exotic Companion Mammal. Her odds of survival were not very good. “When a pet looks so bad that the owner is in the process of digging a grave,” Dr. Miller said, “that’s not a good sign.”

“There were multiple shell fractures and missing shell segments, exposing the coelomic cavity that houses her vital organs,” Dr. Riggan said. “We originally thought it would be difficult for her to pull through due to the amount of damage and exposed bone and soft tissue likely leading to sepsis and a fatal infection.”

Kali was extremely dehydrated, lethargic and non-responsive. “It is certain,” Dr. Miller said, “that without intervention Kali would have surely died.”

Many of the chelonian patients treated at the clinic have been run over by cars. Others are brought in for treatment of parasites or respiratory infections, and then there are those that have fallen victim to raccoons and, of course, dogs, after they have climbed over or dug under their outdoor pens. To quote a previous REPTILES article, “Russian tortoises are natural-born escape artists.”

A tortoise’s shell is composed of two parts: the carapace or domed back of the tortoise and the flat underside known as the plastron. Both are made of many fused bones covered with scutes, bony external plates made of keratin, a hard material similar to a fingernail or horn. Although Kali’s shell was broken at both front and back, most of the damage was on the right rear of her shell, where the carapace was crushed. Most of the keratin was missing from the caudal aspect of the shell, exposing the underlying bone. The one saving grace was that the thin membrane surrounding and enclosing Kali’s vital organs had remained intact. 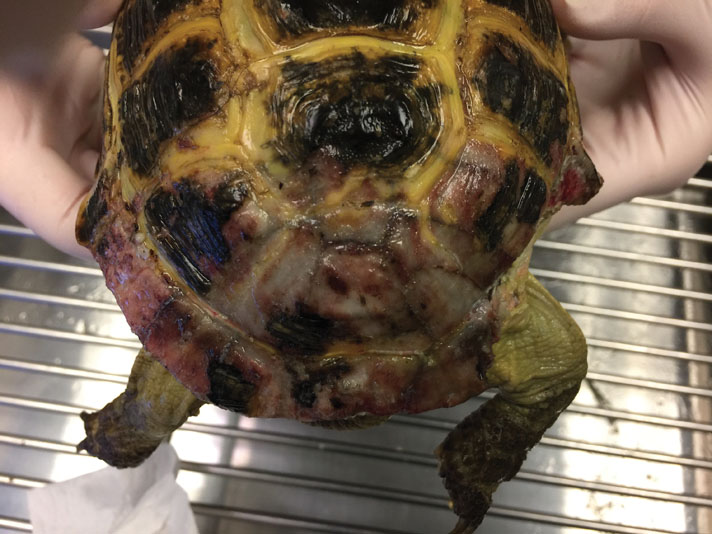 A soft brush and syringe was used to carefully clean and flush the wounds and further assess the damage. “Great care was especially critical,” Dr. Riggan said, “because if we punctured that thin membrane containing her vital organs, it would have all been over.”

In addition to being severely dehydrated, Kali’s body systems were generally depressed; she seemed somewhat lifeless, and her metabolism slowed — nature’s way of helping an organism fight for survival. Pain meds and antibiotics were injected and applied to the wounds regularly, and she was given daily antibacterial soaks and sub-cutaneous fluids for hydration. Kali was also wrapped in full-body wet-to-dry bandages.

“After about five days,” Dr. Riggan said, “the tortoise seemed to shake off her lethargy; she would raise her head and move around a bit.” It seemed they had turned a corner, but Kali would remain in the clinic for observation and continued treatment for another month. While there, she was taken for daily walks in the grass, surrounded by the natural medicine of fresh air and sunlight.

The veterinarians at White Rock were impressed by how tough the little Russian was throughout her ordeal and how she seemed to fight for life. It is well known that the Russian tortoise is a master survivor. Most are from Afghanistan, Iran, China and Uzbekistan, where they endure harsh desert conditions, extremely hot summers and bitter cold winters. 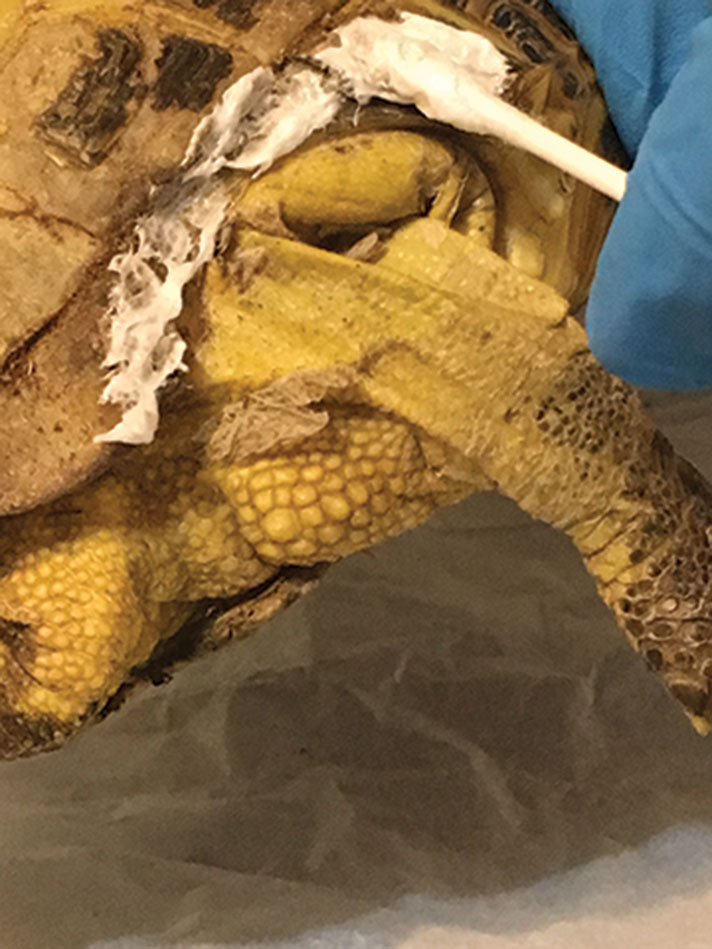 Antibiotic cream being applied to one of Kali’s damaged areas.

Speaking of survival, it is also interesting to note that two Russian tortoises were the first vertebrates to survive the rigors of a journey around the moon and back. In September 1968, two were blasted aloft on the Russian Zond 5 mission. After circling the moon, they returned to Earth and splashed down in the Indian Ocean.  Although they lost about 10 percent of their body weight on the voyage, both tortoises had healthy appetites upon their return. As reported at the time, “the first living things to see an Earthrise from the Moon were communist turtles.”

Because Kali’s internal organs were exposed and tortoise shell does not grow back, there was some discussion of rebuilding sections of the shell, perhaps with wire and special polymers. It was a procedure that Dr. Riggan had successfully performed in the past, but this idea was ultimately discarded because Kali would be kept in a protected environment and not subject to the dangers of the wild. Both vets were also concerned that infection could become trapped inside the rebuilt shell. 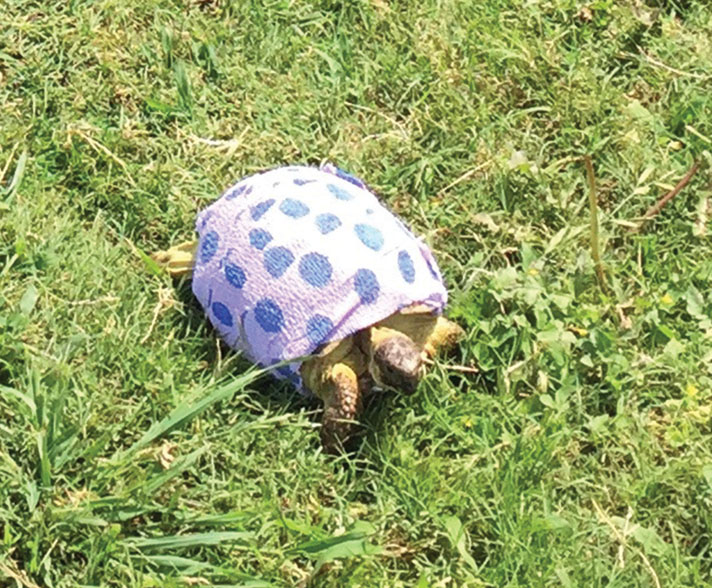 A recovering Kali gets some exercise.

During Kali’s stay at the clinic, 10 veterinary technicians aided the vets by performing important daily tasks to aid the tortoise’s recovery. “Being a part of the healing process is always a very satisfying thing,” Dr. Miller said, “but the case of the little Russian tortoise was somehow special, partly because she was here so long and we were with her every day, and could see her coming alive again. We came so close to losing her and she came so far.”

Home treatments continued for months after Kali was released to her owner, with antibiotic shots every three days and applications of antibiotic cream to the areas of her shell where the bone was exposed and on the broken edges of the shell itself.

After four months, Drs. Riggan and Miller saw the tortoise again. Kali had gained weight and was as active and alert as she had been before her tussle with the English mastiff. And although she would not win any tortoise beauty contests, scar tissue had covered the exposed bone, and the thin membrane protecting her internal organs had thickened. Kali now had a fair chance of living a long life.

“It was only a little tortoise, a visitor from Central Asia, hardly larger than my hand,” Dr. Riggan said, “but knowing Kali’s struggle and her triumph is another reminder of why we became veterinarians in the first place.”

Marshall Riggan has been writing non-fiction film, television and print media stories for 30 years. Most of his work has centered on conservation, the natural environment and wildlife. For two years running, his stories were selected best of the year by the National Outdoor Writer’s Association.

Loading...
Newer Post
Turtle That Roamed The Earth 228 Million Years Ago Without A Shell Discovered In China
Older Post
Why Salamanders Can Regenerate Perfect Tails But Lizards Cannot
Advertisement