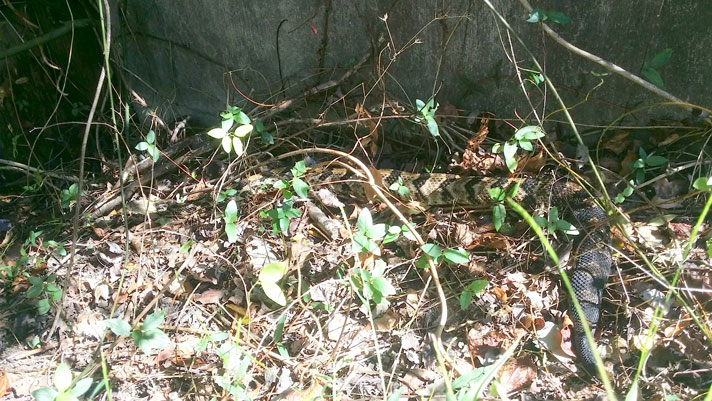 The Last Herp of the Season: In Search of Crotalus horridus

It took years for the author to finally see a timber rattlesnake while out herping.

Extending the range of a salamander to a neighboring county or region. Witnessing snakes tree climbing, intertwined mating, mouse consuming.

Encountering an alligator of prehistoric proportions. Hearing a frog’s mating call (that you have only heard before in recordings) in the wee hours of the morning. Observing a familiar species of lizard with an unusual hue.

Happening upon a turtle hatching event on a remote shore. Capturing two or three different and unlikely species at once in the beam of a flashlight. Standing knee-deep in a vernal pond among the deafening cacophony of toads. These are truly captivating—but we all know that nothing can top a lifer.

Weeks, months, years of painstaking searches in myriad locales and weather conditions. Miles of roads traversed at ungodly hours, feeling like you’re the only person awake on earth. Fooled time and time again by the color of a leaf, the shape of a branch, the tilt of a piece of litter. Thousands of logs and rocks flipped, acres of debris sifted. 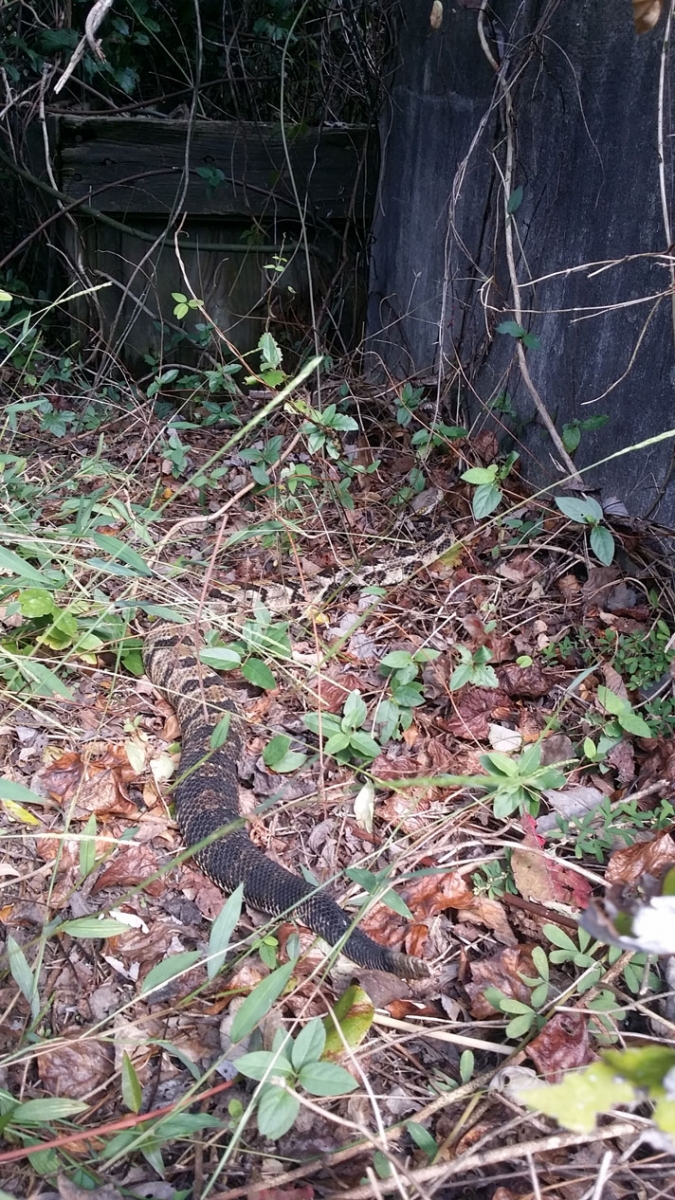 And then it all pays off (or was it simply luck?) and in the field you finally glimpse that elusive salamander, lizard, frog, toad, snake.

Or, it may be common and very see-able, and seemingly everyone has seen it but you—even the woman who jogs every morning who is terrified of snakes and wants to avoid them at all costs, but happens upon a hognose on her running trail through the woods.

For a couple of years my overriding lifer wish was Crotalus horridus. The most widely distributed rattlesnake in North America, it is extremely versatile, inhabiting the mountain heights and the swampy depths. In my range in the hills it is called the timber rattlesnake; but unbeknownst to me I would encounter it as the canebrake rattlesnake.

Crotalus horridus could be a candidate for the most beautiful of rattlesnakes, what with its powerful coffee body and exquisitely tattooed charcoal bands, merging into an onyx tail and rattle that are emblems of lethal capability. Its hues and patterns vary of course, based on location and population: some are gray, gold, or yellowish with a sienna stripe running the length; sometimes the bands join around the bulk of the body, other times they stop short as chevrons. A particularly sought-after find is the Crotalus in its black phase, in my opinion a creature that rivals any other on earth in evoking awe.

I sought out the timber rattlesnake in the mountains of Appalachia in Maryland, West Virginia, and Pennsylvania. As those who are looking for lifers with no inside knowledge, I scoured the habitats that Crotalus were known to inhabit: rock outcrops and forests. The lot of the herper is to be alone in remote places, a solitary figure, inexplicably (at least to the untrained eye) peering into rock formations, dropping as if to do a pushup to peak into crevices, and wandering through leaf and brush strewn woods with head down and eyes alert, all the while fantasizing about finding that elusive den. This was me, year after year, searching for the elusive timber rattler. Inevitably, I encountered a bevy of other snakes, but not my target species.

During those years I made several treks up to the Pine Barrens of New Jersey. Crotalus inhabits this mysterious and surprisingly vast ecosystem which lies amid the most congested areas in the nation, along with other intriguing, regionally-threatened herps like the pine snake (Pituophis melanoleucus), Pine Barrens treefrog (Hyla andersonii), corn snake (Elaphe/Pantherophis guttatas) and eastern tiger salamander (Ambystoma tigrinum). Sustained by the ubiquitous blueberries, I traipsed around the Pines for countless hours and joyfully saw a couple of lifers: hundreds of Pine Barrens treefrogs after a spring rain, and numerous carpenter frogs (Lithobates virgatipes) in the sphagnum bogs. One late summer day after about seven hours of deliberate wandering I ran into two senior herpers who were in the Pines looking for butterflies. One of them, it turned out, saw a timber rattlesnake that day, after 20 years of searching in the Pines. Sure enough, the image on his phone was of a gorgeous four-foot Crotalus, clearly visible on the pined floor. The gentleman, in his 60s, was pleased in that subdued way that comes with age; I was geeked for him while wondering when my turn would be. Would I have to wait 20 years?

Timber Rattlesnake Caught On Video Swimming Out To Sea

Herpers know that the journey for a lifer can be as pleasurable as the destination, especially since that journey is in all kinds of wonderful places and features the hosts of the herpetofauna universe. During my years of searching for Crotalus I visited Southern California numerous times, and on one visit in a matter of days saw four of Crotalus horridus’ relatives: Crotalus atrox, Crotales cerastes, Crotalus ruber, and Crotalus pyrrhus. On the other side of the country in central Florida I happened upon a six-foot eastern diamondback (Crotalus adamanteus), a formidable serpent in anyone’s book. Ever since I notched that particular lifer it has occasionally featured ominously in my dreams and I have often awoken jerking my leg back from its strike.

In late fall in regions with a distinct winter, there is a flurry of herping before the pursuit will have to be retired for a half or year or so. In mid-October of last year, I drove to the Great Dismal Swamp, a sizeable nature reserve just inland from the Atlantic Ocean on the eastern Virginia-North Carolina border. The Swamp is a good place to herp if you can endure horseflies and mosquitoes and don’t mind walking long stretches of trail with sometimes tedious scenery. It is also a prime habitat for the black bear, of which I can attest, once seeing five adults in a matter of four hours.

In North Carolina, Crotalus horridus is known as the canebrake rattlesnake, so named because of its frequenting of tracts of cane, a bamboo-like plant that can grow to heights of 20 feet (not to be confused with sugar cane). Today Crotalus horridus can still be found in cane fields, but also inhabits most of the Carolinas’ habitats: forests, mountains, swamps, fields, floodplains, farmland, fringes, and sandhills. With extensive human development, Crotalus horridus has even made debuts on Carolina beaches and in suburban neighborhoods.

Knowing that chilly weather was on its way and with it the denning of Crotalus horridus, I searched hard that day in underbrush, rotted wood, brush, and leaves. I was somewhat rewarded by uncovering some water snakes ribbon snakes, racers, green snakes, a couple of eastern kingsnakes, and red-bellied snakes. Abundant were bullfrogs, green frogs, cricket frogs, leopard frogs, fence lizards, ground skinks, broadheaded skinks, and a five-lined skink. I also saw yellow-bellied and snapping turtles. Along with some bears I had captured on video, I was grudgingly content to go another year without spotting a Crotalus.

Exhausted after a day of rooting, bending and walking in the sun in a swamp, I came upon a water control structure, which consisted of large concrete blocks and a steel mesh platform overlooking a man-made canal, next to an old dilapidated shed that had largely been overtaken by the forest. Laying on the mesh, I enjoyed the idyll, drifting off after a while. I awoke around five; the sun’s heat had lessened, but the sky was still clear in a rich shade of blue. I rolled to the end of the steel mesh and swung my feet to the ground. I nonchalantly glanced to the old shed to my right and lazily surveyed the floor around it, which was strewn with leaves, pine needles, vines, plants, and—wait. Wait!

I had seen so many pictures of it that I knew it instantly: Crotalus horridus. I almost genuflected. This specimen was about four-feet, with a gray-brown-gold body, black bands, and a black tail about a foot and a half long. As rattlesnakes the Americas over are wont to do, it lay motionless in the shadows of the shed wall, superbly camouflaged, glorious. After marveling at it for about five minutes, I took out my phone and approached it. It moved a little, a slow crawl that a slug could have put to shame, but it was not bothered by me at all. After another 15 minutes of disbelieving observation, I finally rose from my crouch and walked away, elated.

Benjamin Baker, PhD, writes from Maryland. You can follow his herping adventures on his Flickr page (https://www.flickr.com/photos/benherps/).