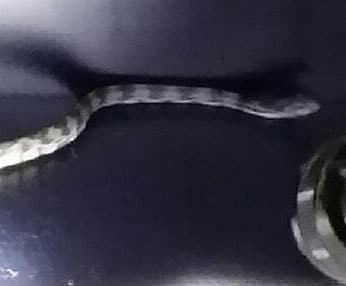 A snake was found in the locker room of the Portland Trail Blazers during their Western Conference semifinal game with the San Antonio Spurs in San Antonio by reserve forward Thomas Robinson, who tweeted that he was scared, really scared. While initial reports said that the snake was a baby rattlesnake about 3 to 4 feet in length, other reports said that the snake was non-venomous and was safely released back into the wild. A picture of the snake that appeared on the Portland Trail Blazers Twitter feed was inconclusive.

News reports said this was a rattlesnake, though San Antonio Arena officials say it was non-venomous.

“Man, me and Thomas at our lockers as usual,” Trail Blazers guard Will Barton told the NBA's Forward Center. “We’re changing and he goes to put his shoes down and he’s like ‘What the …?’ You know what he said. He’s like ‘There’s a snake under my locker dog!’ And I’m like ‘Stop playing.’ He’s like ‘No for real! A real snake!’ And we just looked under there and there was a snake. I was scared!”

“I just put my shoes down and once I put my shoes down I double looked and I seen a snake sitting there,” said Robinson. “After that, I got away from it. I just seen something curled up and I looked again and it was a snake. No one believed me until they looked in there. It hissed, I backed up.”

San Antonio arena officials were called and they removed the snake and a spokesperson for the Spurs said the snake was not a rattlesnake.  Officials have no idea how the snake got in the locker room but Forward Center noted that San Antonio Spurs Guard Danny Green keeps snakes and posted a video of him showing off his Boa constrictor.

You can see the video here.