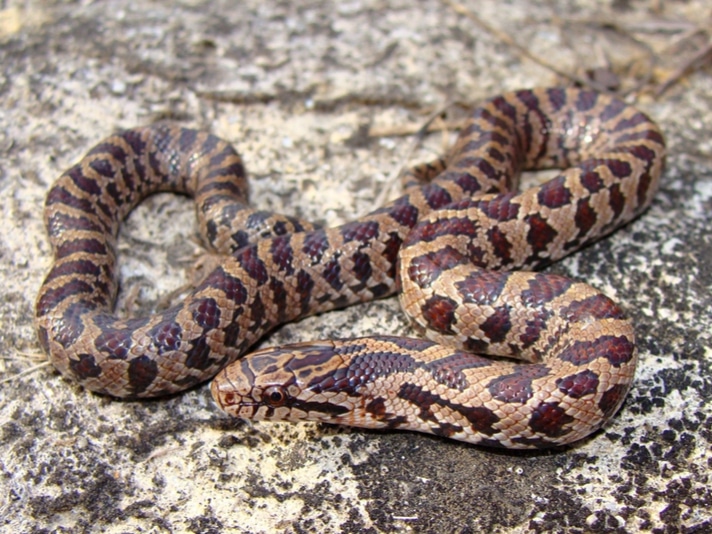 How to Care for Mole and Prairie Kingsnakes

These secretive snakes are often referred to the yellow-bellied kingsnake group.

Mole and prairie kingsnakes belong to a kingsnake species, Lampropeltis calligaster, with three subspecies. When taxonomists collectively speak of this group, they often refer to it as the yellow-bellied kingsnake group, but hobbyists steadfastly separate mole kings from the prairie king. 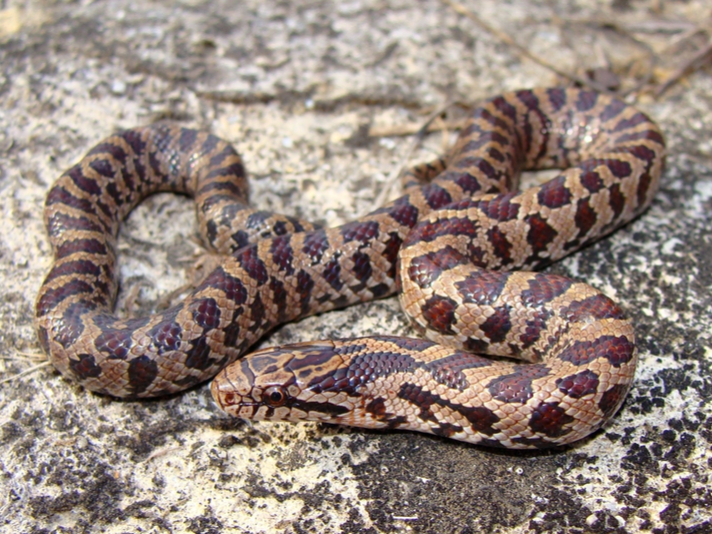 These secretive snakes are often referred to the yellow-bellied kingsnake group.

Although kept by hobbyists, they are not as popular as the members of either the common kingsnake group or the many species and subspecies of tricolored kingsnakes and milk snakes.

Lampropeltis calligaster has two of the most fossorial of the large snakes of eastern and central North America. The name “mole kingsnake” says it all. These two are the rather well-known northern mole kingsnake and the very poorly understood South Florida mole kingsnake.

The prairie kingsnake is the third member of the group. Although secretive, it is not as persistent a burrower as its relatives. Much about this race is quite well-researched, but a few things about its home life remain enigmatic.

Although all three subspecies have characteristic differences, they share at least one similarity. Dorsal blotches on each subspecies are broadest and brightest anteriorly, and they may become solid-black posteriorly. These blotches may be broken vertebrally, thus forming two lines of dorsolateral spots rather than a single saddle.

Ranges Both Defined and Debated

A vast expanse with much suitable habitat extends between the southernmost range of the northern mole king’s Alabama and Georgia range and its known populations in the Florida Panhandle. Furthermore, a distance of several hundred miles is between the known range of the northern subspecies in Florida and the currently known locales of the South Florida mole kingsnake on the central peninsula.

What is unclear at the moment is whether mole kingsnakes are actually absent from these expanses or whether they haven’t been found there yet. These snakes are so secretive that it could be the latter.

In fact, several years ago a northern mole kingsnake was found in the garden of an Alachua County resident. This is about 150 miles southeast of the panhandle populations. Some biologists feel the snake was an escapee, but its true origin is something we may never truly know.

If it was a naturally occurring resident of Alachua County, then the question of how far south this snake actually occurs arises. It also opens for debate where the true line of demarcation between the northern and the South Florida mole kingsnake subspecies may be.

I have a bit of history with mole and prairie kingsnakes. While in my rat snake and kingsnake phase of the hobby, I kept and bred prairie kings. I also had seen them in the sandy woodlands and grasslands of Texas.

I had seen northern mole kings early on in my search for reptiles crossing roadways at night in agricultural Virginia. I also saw them on jeep trails in the Sandhills of North Carolina. I looked for them in Florida and failed, and I had to satisfy myself instead with examples brought years ago to Art Meyer and Clive Longden.

Read More on Other Kingsnakes

I was caught by surprise when the South Florida mole kingsnake was discovered and described. I had no idea a mole king of any sort inhabited those fertilized and graded expanses of citrus in the center of the peninsula. I spent many spring, summer and autumn nights driving those arrow-straight roads in the hopes of seeing one, but I always left disappointed in the wee hours of the morning. Although I have now seen these mole kings (I even have some), I remain unfamiliar with them in the wild.

The first several I saw were shown to me by Robert Tregembo. Robert had stumbled on a “honey hole” for the snake in a citrus-growing area in Desoto County, Fla. He had found several, but if I recall correctly, almost all were males found on spring evenings as they crossed dirt access roads. Perhaps they were following the pheromone trails of females. Perhaps they were foraging. Perhaps they were just moving from one place to the next. Who knows.

All were about 30 inches long and olive-gray, and they had anterior saddles of a maroon so deep that in a hurried glance they looked black. I remember thinking they were interesting but that they could not hold a candle to their northern relative in beauty.

Nevertheless, they caught my fancy, and once again I began looking for the snake in earnest. Again I failed. After writing this article, my interest has once again been piqued, but now I live much further away, and gasoline is much more expensive. I doubt I’ll put too much effort into the search, but I sure would like to see one in the wild!

Both the mole and prairie kingsnakes are hardy as captives, and innumerable hobbyists keep them. Prairie kings are the most popular, or at least they seem to be the most consistently bred in captivity.

Few mole and prairie kingsnakes exceed 4 feet in length, so they can be maintained in terraria or cages of 20 gallons or less (a “long” 20-gallon tank has bottom dimensions of 12 inches by 30 inches). The cage does, of course, need to be tightly covered. Cage furniture, such as limbs and a hide box, may be added to any of these setups.

Substrate can be aspen, cypress mulch, newspapers or paper towels. The first two provide a burrowing medium and visual barriers for these secretive snakes. With the last two substrates, however, you may feed the snake and not worry about wood chips or fibers being accidentally ingested.

Both adults and hatchlings thrive when their cages are near room temperature. Prudent use of an undertank heater can provide a temperature gradient. The cooler end of the cage should be about 74 to 76 degrees Fahrenheit, and the warmer end should be about 84 to 88 degrees. No special lighting is required.

Feeding is simple. Fresh water should always be present, and most subadults and adults of all three races readily accept thawed mice.

All three subspecies may be bred rather readily. Keep the snakes at an optimum body weight and parasite free, maintain a natural photoperiod and then cool or hibernate the snakes in darkness at a temperature of 48 to 56 degrees for 90 days during the winter months.

After removing the snakes from their hibernaculum, bring them up to room temperature, and make their first meal a small one to ascertain their digestive system is working well. After the snakes stool, begin feeding them liberally. Put the male and female together during or immediately following the first post-hibernation shed.

Following copulation provide an egg deposition box, often a plastic shoebox with an access hole cut in the cover and mostly filled with dampened sphagnum moss. As the female nears her oviposition date it is a good idea to remove the water dish, so she doesn’t choose this for a deposition site. The female probably will shed her skin a few days before deposition. Eggs number from one to more than 15, and they should be incubated at a temperature of 78 to 82 degrees. I prefer moist sphagnum for the incubation medium.

Patience and Persistence for Hatchlings

Hatchling care is much like that for adults, but there are differences regarding feeding. Although the older kingsnakes accept thawed mice, inducing hatchlings to eat may require both dedication and innovation. This seems especially so of hatchling South Florida mole kings.

In the wild it’s likely the hatchlings feed first on ground skinks or tiny snakes, and it is for these prey items that some hatchlings steadfastly hold out. Furthermore, among these holdouts are one or two hatchlings that always seem to reject even the natural prey. Although this is disturbing to breeders, it could be that these hatchling snakes would not even accept food in the wild, and they would eventually succumb to starvation.

However, few among us can allow a hatchling to die without Herculean efforts to save it from its self-destructive ways. Sometimes we can succeed by teasing the baby with the meal, or as a last resort, by actually placing food in its mouth (assisted feeding). Two foods favored by herpetoculturists for these methods are skink tails and lizard-scented pinky mice legs.

To tease-feed a hatchling, grasp the prey in short forceps, and gently tap the snake on its tail, body or snout. The goal is to cause the snake to defensively strike the food being offered. After one, two or ten (or more) times, the snake sometimes retains its hold, and the defensive bite turns into a feeding response. It is very important that you gently and slowly attempt to tease-feed  because you don’t want the snake to become frightened and attempt to flee.

As a last-ditch effort on your part, assist-feed a hatchling. Gently but firmly with one hand, grasp it immediately behind the head. Sometimes the snake will open its mouth to try to bite; sometimes a gentle tap or two on the snout will induce one to open its mouth. Others will need to have their mouth gently but forcibly opened.

Insert the skink tail or pinky part gently into the snake’s mouth, and push it with forceps or another blunt instrument at least partially into the snake’s throat. Hold the snake quietly (no movement on your part) until it stops squirming.

At this point it will attempt one of three ploys: try to dislodge the food item, sit quietly and do nothing, or begin swallowing (if you’re lucky). If the hatchling just sits quietly, sometimes very slowly placing the snake back in its cage and releasing it (move slowly —ever so slowly!) provides the impetus for the snake to do one of the other two responses. Gentleness, slow movement, small prey items and persistence are the keynotes to success (if success is to be had) with assisted feeding endeavors.

Sadly, some hatchlings fail to thrive no matter what you do, so all the time spent may be for naught. But the occasional one that does thrive makes all efforts worthwhile.