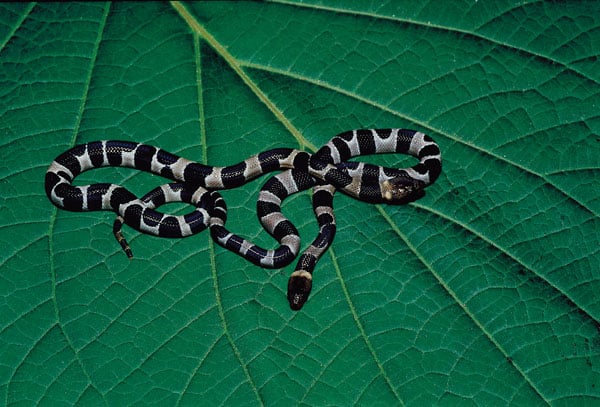 Keeping Dwarf Boas Of The Caribbean

If you want a boa that doesn’t get as big as Boa constrictor, try one of its smaller cousins.

The next time you plan a Caribbean vacation, imagine yourself soaking up the sun’s rays on a beach in Jamaica, or eating fresh seafood in the Bahamas, or scuba diving off the Turks and Caicos Islands. Great beaches, warm tropical breezes, palm trees, great food — sounds pretty good, right? Before you slip into a daydream, hold that thought for a minute.

These vacation destinations also lay claim to a tremendous variety of amphibians and reptiles. Some of the Earth’s smallest and largest lizards (Sphaerodactylus spp. and Cyclura spp.) occur here, giant sea turtles are not only found in the waters but also nest on the beaches, and both the largest Hyla treefrog and smallest Eleutherodactylus "rain" frog species call these warm and sandy islands home. A variety of insular boas of the Boa and Epicrates genera are also found in assorted sizes and colors on many of the Caribbean islands. Leaving aside these big boys, however, the Caribbean also lays claim to a little-known group of dwarf boas of the genus Tropidophis. 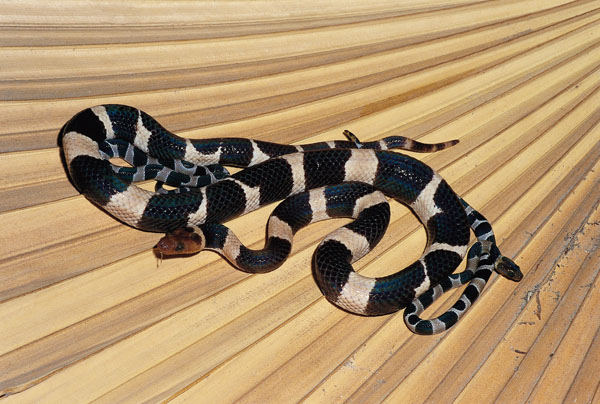 Although dwarf boas, like these neonate Feick’s dwarf boas (Tropidophis feicki), are primarily terrestrial, they can occasionally be found in trees, vines and bromeliads.

When one thinks of a boa, the image that immediately comes to mind is a substantially sized constricting snake. However, Caribbean dwarf boas, or “wood snakes” as they are sometimes known, are usually less than 2 feet in length. Despite their smaller size, they do share some physical characteristics with their larger relatives, the most obvious being the possession of two spurs located on either side of the vent. Considered vestigial limbs, spurs are found in most species of Caribbean dwarf boas. While other anatomical characteristics are similar to those found in their larger cousins, they also share certain features with other snakes and thus, for taxonomic reasons, the Caribbean boas occupy a distinct family known as the Tropidophiidae.

The family is predominately insular in distribution, with 18 species occurring in the Caribbean, and another three species in various parts of South America. Cuba lays claim to the greatest diversity of Tropidophis, with at least 14 species found on the island. In the past decade alone, at least four new species have been described from Cuba. 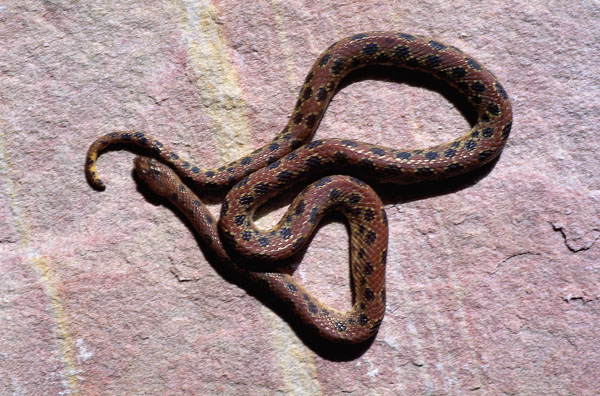 Although most adult dwarf boas reach 2 feet in length, the slender Cuban species, Trophidophis maculatus only reaches up to a foot long.

Although most dwarf boas can be characterized as small (less than 2 feet), exceptions do occur. The Cuban dwarf boa can exceed 3 feet in length. The majority are rather drab in coloration, with numerous dorsal spots or blotches, but a few of the Cuban species exhibit a more striking coloration of dark spots or banding on an off-white to tan ground color. Some possess a distinct, bright, yellow-to-orange tail tip. Erythrism, or an unusual red-to-orange coloration, is known to occasionally occur in several species. Scalation variation between species occurs, too, with some dwarf boas having keeled scales while others have smooth scales.

Dwarf boas are found in habitats including pine and rain forests, hammock woods, swamps and scrub, as well as around areas of human habitation. They are most easily found under palm fronds, rocks and boards during the day. While predominately terrestrial, dwarf boas are known to occasionally climb and have been found in trees, vines, bromeliads, and even within the upper reaches of a cave. I read of one dwarf boa that was found on the roof of an outhouse, 8 feet above the ground.

Dwarf boas are excellent swimmers and have often been observed near swamps and man-made wells. Their propensity to frequent these areas may be associated with their search for prey. Like many other reptiles, they are often observed during periods of heavy rain. In the Bahamas and on the island of Jamaica, the names “thunder snake” and “water snake” used in reference to dwarf boas are thought to be attributed to the snakes’ activity during rainy periods. Also supporting evidence of activity during rainy periods are reports of DOR (dead on road) dwarf boas following morning rains on Andros Island in the Bahamas.

Caribbean dwarf boas have been observed to change color in relation to their activity patterns. This lightening and darkening of their external features is affected by photoperiod, temperature and feeding. During their nocturnally active hours, the snakes’ overall coloration tends to lighten, and a darkened phase occurs when they are inactive. I have observed this ghostlike phase when observing captive Haitian dwarf boas in the evening. They displayed a somewhat muted coloration that made them look as though they were about to shed. This is made possible by the shifting of melanosomes (pigment granules) in a snake’s dermal layer. During the lighter phase, the melanosomes shift away from the upper layer of the epidermis, and the process is reversed during the darker phase. This unusual pigment shift has been noted to occur in other snake species as well.

Reproducing these island gems is not especially difficult, and they apparently react to environmental stimuli much like colubrid snakes. Provided that specimens are healthy and feeding, breeding these little guys requires several steps. First, separate individual animals and discontinue the feeding regimen. At the end of approximately two weeks, begin to gradually lower the ambient temperature in their enclosures by several degrees a week, bottoming out somewhere in the mid- to upper-60s. Naturally, dropping the temperature is a lot easier during the winter months. When lowering the ambient temperature, continue to provide a slightly warmer area, at least during the day, using a small, incandescent spotlight or under-tank heating device. Be sure it heats up only a small portion of the enclosure; that will continue to allow the snakes to thermoregulate. 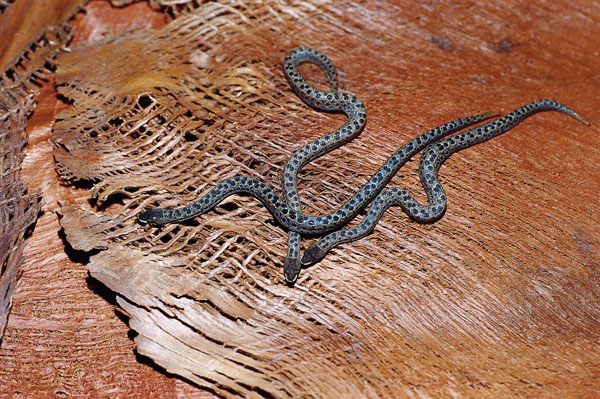 The cooling-down period should be maintained for a minimum of two months. At the end of this period, reverse your steps and gradually increase the ambient temperature. As it returns to its pre-cooling setting, offer the snakes food. At this time I feed females as much as they will consume and the males sparingly.

I introduce the female into the male’s enclosure, instead of the other way around, as other breeders practice. I believe that this way encourages more attention from the male to the female. If mating does not occur initially, separate and reintroduce the snakes on a periodic basis.

Gestation periods may vary from four to six months depending upon a number of variables, such as species and gestation temperature. Offer a potentially gravid female a thermocline, or a choice of several temperatures, and she’ll do the rest. Females may or may not stop feeding during gestation, so don’t be alarmed if they do. Parturition (the birthing process) may occur all at once or over a number of days. I once had a Caicos Island dwarf boa (Tropidophis greenwayi) give birth over a period of several days. I found a couple of neonates and considered the birth complete, then was surprised over the next couple of days when I continued to find one or two newly born neonates.

Feeding neonate dwarf boas can present a problem. They generally don’t feed as readily as adults, and you will often need a good supply of hatchling geckos or anoles, at least for the first few months. If you live somewhere such as Florida, where such lizards are prevalent, finding a steady supply is usually easier. By planning ahead, though, hatchling lizards can be obtained and immediately frozen, or adult lizards can be held long enough to lay their eggs, which can be incubated and hatched.

When all is said and done, if you house these dwarf boas together year round, they may reproduce even if you do not manipulate the snakes and their temperatures in any way. Breeding them is not an exact science.

Because of their size, most dwarf boas can be kept in escape-proof enclosures with the dimensions of a standard 10-gallon aquarium. Because of their secretive nature, a layer of bedding is preferable over substrates such as newspaper. I have found that cypress mulch works well, and I prefer it over aspen/wood shavings because of its moisture-retaining qualities. While these small snakes will burrow into the substrate, appropriately sized pieces of cork bark laid over the surface will give them an alternative place to hide. A sturdy water bowl that cannot be tipped over and which is large enough to allow a snake to totally submerge completes a basic cage setup.

Ambient temperatures in the mid to upper 70 degrees Fahrenheit are recommended for Tropidophis species, with a warmer area in the mid-80s to allow the snakes to thermoregulate. The “hotspot” can be accomplished using either an incandescent spotlight overhead or a heat pad or tape under the enclosure, beneath the hotspot. I strongly suggest investing in a rheostat to fine-tune the amount of electricity supplied to such heating devices, which further allows you to control the amount of heat they put out. Rheostats are often available at shops that sell a large assortment of reptile supplies.

Dwarf boas display several interesting defensive behaviors. Coiling in a ball is possibly the most commonly observed and is similar to that of the ball python (Python regius), the burrowing python (Calabaria reinhardtii) and the rubber boa (Charina bottae). The snake, with its head positioned close to the center of the ball, will remain in this position until the perceived threat has passed. On the Bahamian island of Andros, the local name of “shame snake” is thought to be attributed to this coiling behavior.

One of the most peculiar defensive behaviors known in snakes is the dwarf boas’ ability to produce blood in the eyes, mouth and nostrils when disturbed. Most commonly noted in horned lizards (genus Phrynosoma), autohemorrhaging has been reported to occur in at least seven dwarf boa species.

Although larger species, such as T. melanurus, prey upon rodents and birds in the wild, most dwarf boas feed primarily on lizards and frogs. With patience, however, captive snakes can often be trained to take rodents. Getting an obligatory lizard- or frog-eating snake to feed upon rodents can be accomplished by a technique known as “scent transfer.” The first step is to get some pinkies. I favor frozen pinkies, because they are easy to obtain and store, they thaw fairly fast and simply don’t have the same maintenance issues as live rodents. Next, get a small lizard, such as an anole or house gecko. Wash a pinky with soap and water, which will help remove some of the mouse scent. Then rub a pre-killed lizard on the pinky so the lizard’s scent is transferred onto it, and offer the pinky to the dwarf boa.

There are other alternatives, though some people may consider them a bit gross. A pinky can be dipped into a “lizard puree,” or a severed lizard limb can be placed into a pinky’s mouth prior to being offered to a dwarf boa. Or a patch of lizard skin can be placed over the pinky’s head. Generally, by manipulating the pinky with forceps or hemostats and offering it headfirst, a dwarf boa can be tricked into thinking that it is a lizard. All the techniques mentioned here work just as well when using frogs. Either way, it is very important to slowly approach dwarf boas while attempting to feed them because they are extremely timid.

Follow these tips and you should have no problem caring for dwarf boas. If space is a consideration, and even if it isn’t, you will find that Tropidophis species can make engaging captives.

R. MICHAEL BURGER is a writer, artist, photographer and avid herpetoculturist with more than four decades of experience. His pen-and-ink drawings, photos and articles have appeared in a variety of American and European publications, including books and magazines.