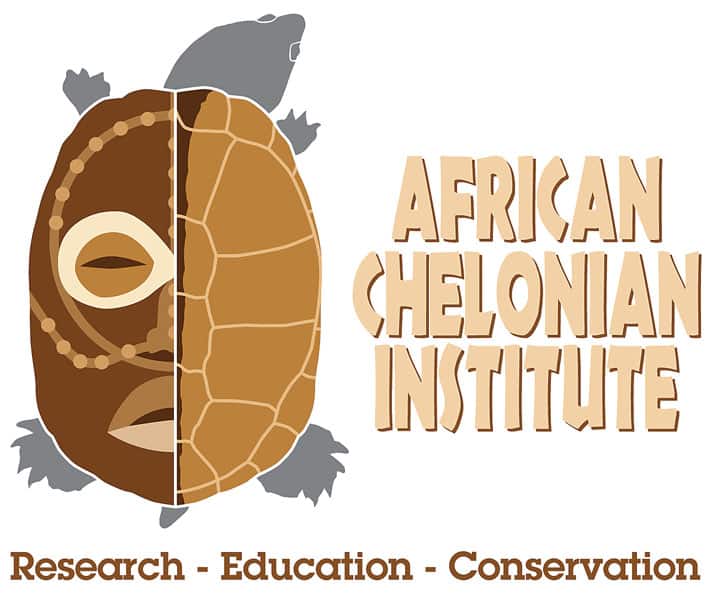 The African Chelonian Institute: Protecting The Turtles Of Africa

Although the decimation of some African chelonians has been well documented, many species are not listed on the IUCN Red List because there is almost no information about them

Eunotosaurus africanus, the oldest known ancestor of the order Testudines (all turtles), evolved from South Africa 260 million years ago and spread across several continents. Today, turtles are the vertebrates under the greatest threat worldwide, and of the approximately 320 extant turtle species, very little is known about the status and distribution of many of the 46 African freshwater turtle and tortoise species that descended from that earliest ancestor. 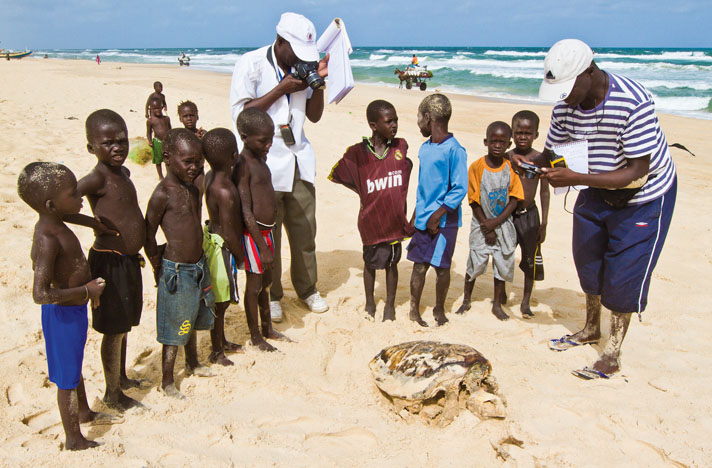 Although the decimation of some African chelonians has been well documented, many species are not listed on the IUCN Red List because there is almost no information about them, beyond what has been attained using reference specimens. The remote locations where these turtles live make them very difficult to study, but what is known is that populations are being decimated, often due to human activities such as hunting them for food and habitat destruction.

Though supporting a fairly diverse chelonian assemblage with 46 recognized species, Africa has not received the global attention in regard to its imperiled chelonians that, for instance, Asia has. With only a handful of long-term research programs from which to draw information, and with reliable survey data lacking for most of the African countries, the chelonian fauna, for the most part, remains very poorly known. 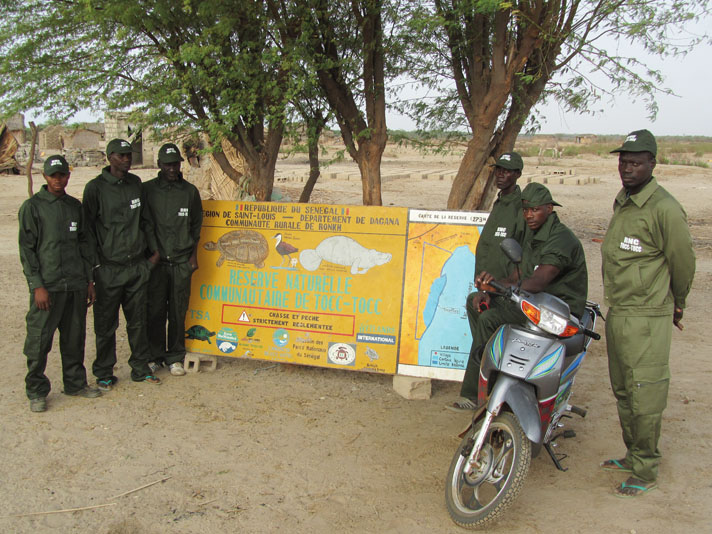 A group of “eco-guards” at the Tocc Tocc Refuge Lac de Guiers in Senegal, next to a panel erected as part of the ACI’s Adanson’s mud terrapin conservation project.

The local bushmeat trade has long been a steady drain on African turtle and tortoise populations, but now the long tentacles of Asian market forces have reached the Dark Continent, as well. Examples of this include the discovery of a turtle butchery on Lake Malawi, created for the sole purpose of procuring the cartilage of the Zambezi flapshell turtle (Cycloderma frenatum), as well as the massive illegal trade in thousands of African turtles and tortoises for Asian markets and the pet trade. Recently, hundreds of Pelomedusa and Pelusios side-necked turtles were collected for Chinese restaurants based in Senegal; these were later confiscated by wildlife trafficking authorities.

Given the public perception of lower threat levels to Africa’s chelonians compared to those of Asia, they have been largely left out of prioritization and strategic planning exercises, and conservation funding has been elusive. An IUCN Red Listing workshop in 2013, held in Lome, Togo, West Africa, helped focus new attention on this poorly understood group. Additionally, in 2008, in an effort to establish an organized force to address the conservation concerns of Africa’s chelonians, I began mobilizing partners across Africa from my home base in Senegal.

I launched the African Chelonian Institute (ACI), a nonprofit organization dedicated to promoting long-term conservation of all African turtle species through research, education and grassroots collaboration for conservation. With limited funding and scant resources, we have been able to initiate several conservation programs, as well as facilitate and operate a turtle and tortoise breeding facility. We also conduct various surveys that shed new light on Africa’s turtles and tortoises. Following are three of our ongoing projects.

The Rhodin Center in Senegal is our breeding facility, and an important component of the African Chelonian Institute program. It is named after Dr. Anders G. J. Rhodin, Chairman Emeritus of the IUCN/SSC Tortoise and Freshwater Turtle Specialist Group, and one of the world’s leading experts in chelonian conservation. 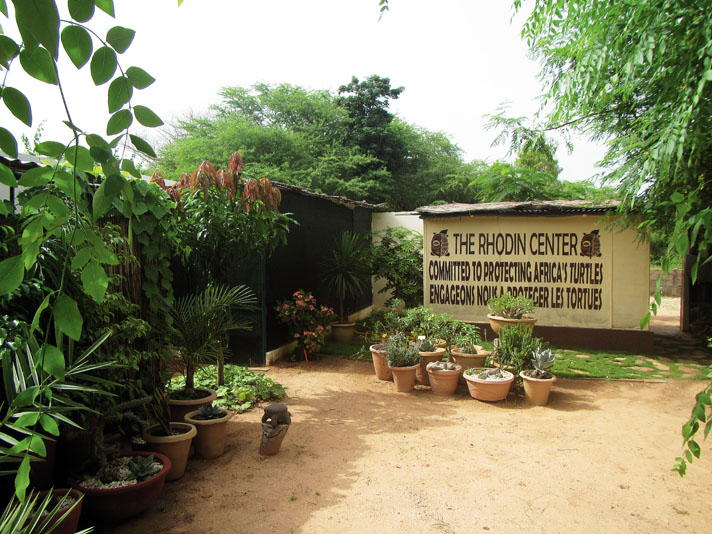 The Rhodin Center in Ngaparou, Senegal, is the African Chelonian Institute’s breeding facility.

The center’s goals include building ex situ assurance colonies for African chelonians, particularly the endangered African forest hinge-backed tortoise and critically endangered Home’s hinge-backed tortoise, and to head-start hatchlings born at the ACI prior to releasing them into the wild, in order to increase the likelihood of their survival and to enhance wild populations.

Public education — about African turtles, their threats, and the need for conservation — is another goal, as well asw to provide a safe haven for turtles confiscated by wildlife authorities, prior to releasing them back into the wild or to care for those that can’t be released. 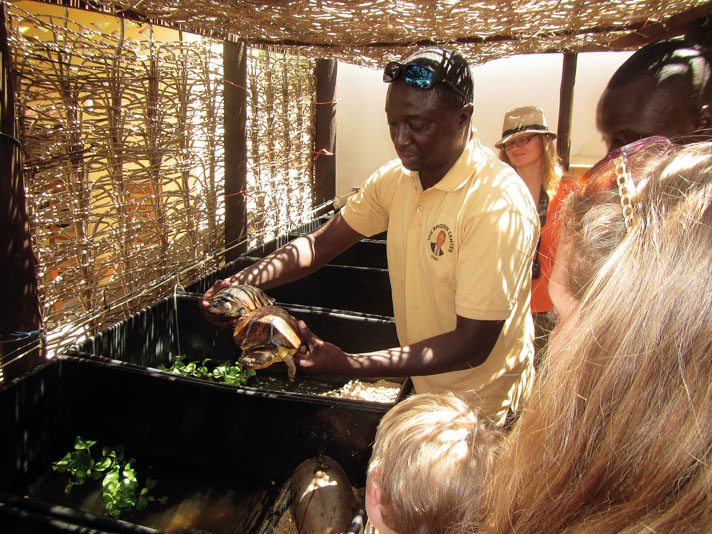 As part of its educational outreach, a specimen reference collection archive is also planned to be available to students and scholars for taxonomic, morphometric, genetic, and other studies.

In 2014, the ACI was the first facility to successfully breed Adanson’s mud terrapin in captivity. Thirty-one hatchlings were head-started and released into the wild at Tocc Tocc Community Natural Reserve at Lake Guiers in northern Senegal. This lake is the only place where this species occurs in Senegal. The number of remaining P. adansonii is unknown. The turtle is frequently hunted by local people for food, and the ACI regularly conducts educational outreach programs for the communities there to teach the importance of conserving the turtles. In the summer of 2016 we head-started 80 more Adanson’s mud terrapin hatchlings, and we plan to continue public outreach and future releases of these turtles.

The hinge-backed tortoises, Kinixys erosa and K. homeana, have a considerable range over the continuous Guinea-Congo rain forest region in west and central Africa. They are medium- to large-sized tortoises, with a carapace length not exceeding 16 inches. Kinixys is a unique genus of tortoises that can close themselves entirely within their shells, due to the “hinge” for which they are named, located toward the rear of the carapace, which slopes down steeply. 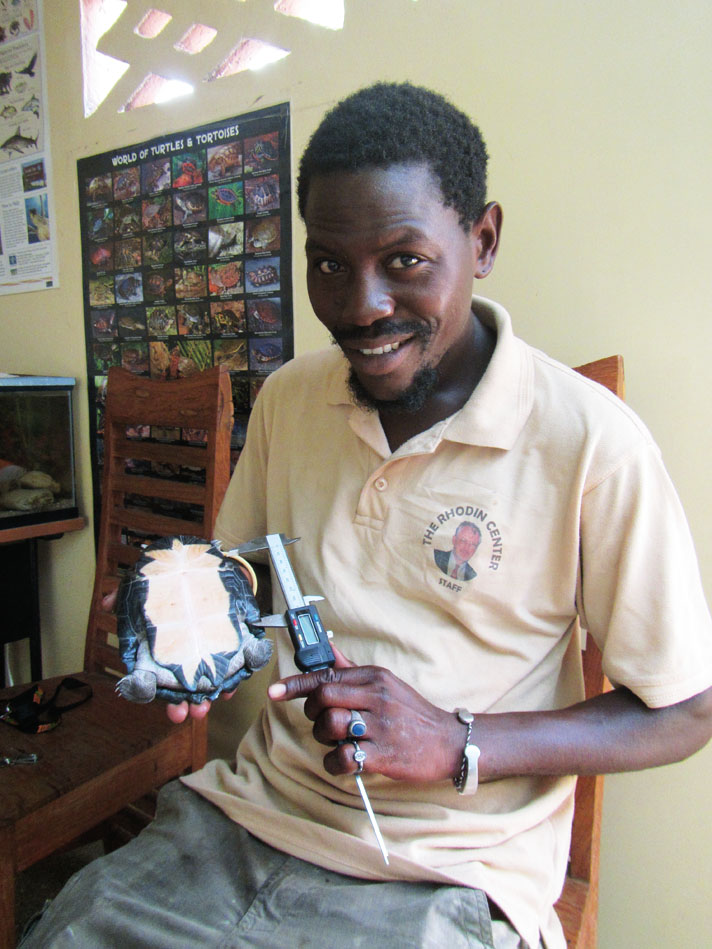 These hingebacks inhabit lowland evergreen forest, marshy areas, and forest galleries growing along rivers and streams. They are omnivorous, with mushrooms being predominant.

The primary threats for these species include subsistence hunting by local people living in desperately poor economic conditions, agricultural and industrial expansion with deforestation, and trade for the pet industry. 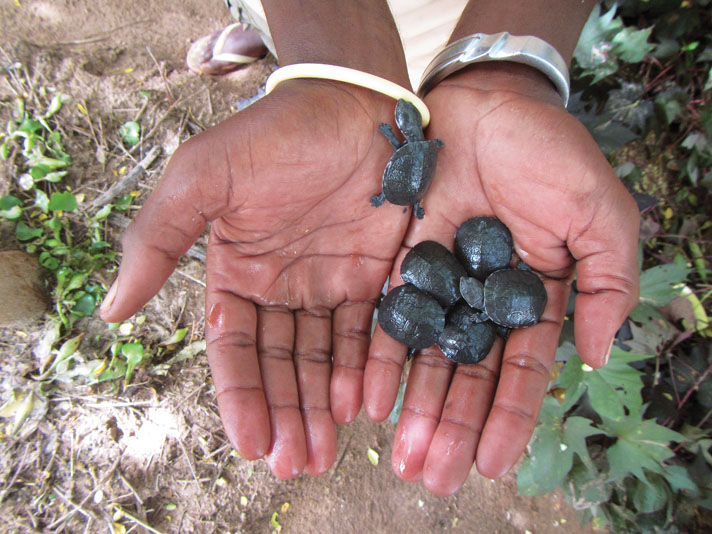 These are 1-month-old hatchlings of the African helmeted turtle (Pelomedusa variabilis), one of the 15 African chelonian species maintained at the Rhodin Center.

Strong conservation efforts for forest tortoise species are needed, as is more field research into their ecology, abundance and survival status. Protected areas with viable populations of these tortoises are needed throughout their natural range.

Goals of the ACI’s hinge-backed tortoise conservation project include conducting assessments of the distribution, current status, ecology, and reproductive biology of these species in Benin and Nigeria. This includes the Oueme region of southeastern Benin, where both species have been identified living sympatrically in an area overlapping Nigeria.

In addition, the ACI plans to release head-started and confiscated hingebacks in order to reinforce remaining wild populations, and to establish a community-based conservation area in Benin to protect remaining wild populations in conjunction with  government wildlife agencies, local conservation groups, and the non-profit organization Nature Tropicale. Viable populations of these species must be protected in their natural habitat.

Waters along the Senegalese coastline are well known as a migratory hub for sea turtles. Four species have been documented and are known to occur in the region: the green (Chelonia mydas), loggerhead (Caretta caretta), olive ridley (Lepidochelys olivacea) and leatherback (Dermochelys coriacea). 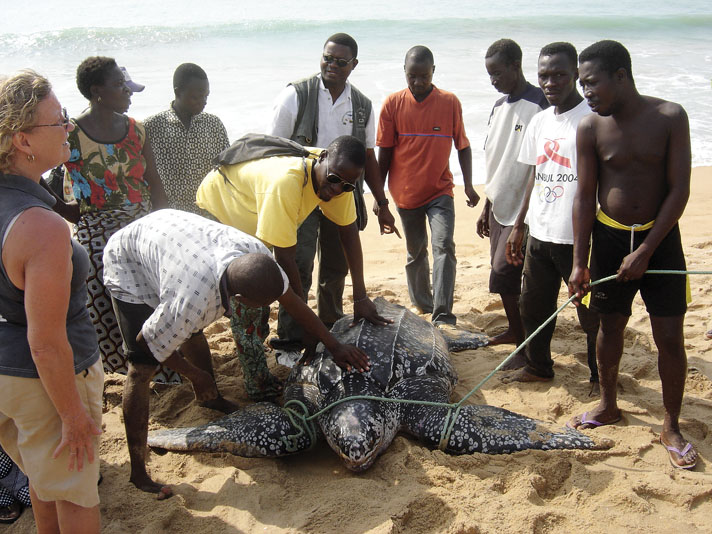 This leatherback sea turtle was rescued with ACI partners in Benin, West Africa.

Very little work has been done to broaden our understanding of the numbers, seasonality and threats to the sea turtles using this region. The habitat we survey includes the northern Atlantic coastline beaches of Senegal, from Dakar to St. Louis, covering a total distance of about 114 miles. Other organizations conduct surveys in this area related to cetaceans and seabirds; ACI leads the sea turtle component. The main objective is to assess sea turtle (and cetacean) mortality along this remote and little-developed coastline.

The results so far are astonishing. Since the first survey in 2014, we have documented 101 sea turtle carcasses, including all four of the previously mentioned species, in various states of decomposition. The cause of this massive sea turtle mortality is suspected to be related to bycatch, in which turtles are caught during commercial fishing for other species. Commercial fishing activities are very intense offshore in this region.

The ACI plans to take further action to document and reduce this tragic and unsustainable mortality for West African sea turtle populations. We are now planning to conduct coastal surveys in the same area every month, in order to more accurately document levels and possible seasonality of mortality. Depending on funding, we also hope to survey Senegal’s central and southern coasts. 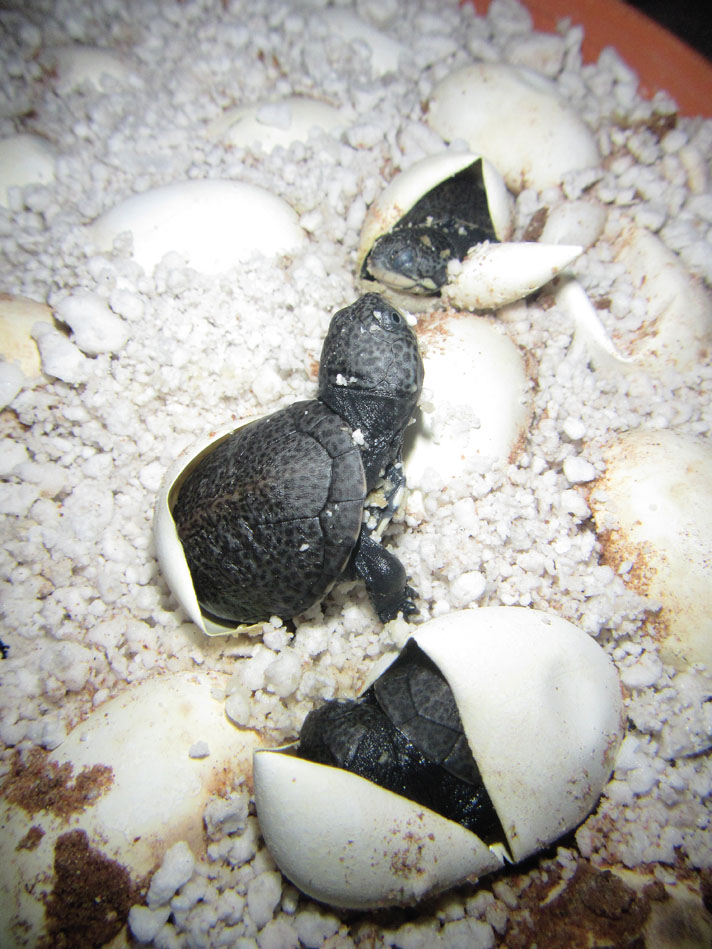 This is the first time bycatch data relating to sea turtles is being accurately and routinely collected and analyzed in Senegal, and we expect to educate the scientific community and the Senegal fisheries authority, as well as other stakeholders, about the potentially extensive threat of bycatch in the region. We hope to build on this initial study with future long-term studies to monitor bycatch rates, study the origin of the turtles using genetics, and, ultimately, to play a role in implementing new measures to protect sea turtles in Senegal.

The African Chelonian Institute is the first facility to consolidate knowledge related to all turtle species of the African continent and associated islands. Our vision is multi-faceted: We are a breeding facility for endangered African tortoises and freshwater turtles, we’re building grassroots programs to re-introduce turtles back to their natural habitats, we house one of the largest collections of reference specimens in Africa, as well as a library of turtle media for study, and we are a training center for students and researchers, as well as an educational center that is open to the public. We are currently working out of a temporary facility and are in the process of fundraising in order to purchase land for our permanent facility, and a museum, near Saly, Senegal, one hour south of the capital of Dakar. The new facility will be constructed in phases, starting with the breeding area.

Additionally, the ACI will continue to conduct field research on African turtle species in order to increase knowledge and conservation efforts. For more information, and to help support our work, please visit africanchelonian.org, and like us on Facebook at facebook.com/AfricanChelonianInstitute.

Tomas Diagne, the founder and director of the African Chelonian Institute, is an African freshwater turtle and tortoise expert and conservationist who has been working to save threatened and endangered turtle species throughout West Africa for the past 23 years. A member of the IUCN Tortoise and Freshwater Turtle Specialist Group, he has dedicated his life to the conservation of turtles and tortoises throughout the continent, and a vital mission to study, conserve, and bring global attention to Africa’s chelonians.