Brumation is key to breeding.

If you want your adult Mexican kingsnakes to successfully reproduce in captivity, I recommend a brumation period. Brumation merely enables the adults to conserve all their energy and slow down their metabolism. Males use this conservation period to generate viable sperm. The main reason females are brumated with the males is to make sure they cycle at the same time. Plus, during their first brumation together they get to know each other. The theory has not been tested by me, but females typically will ovulate without a brumation. 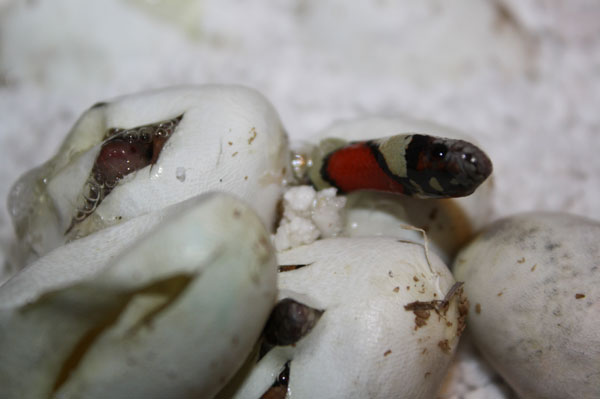 The brumation period is easily achieved in most geographical areas of the country, but it may be a challenge for those who live in south Texas or Florida. Breeders in these southern locations typically use a wine cooler or air conditioning to create the low temperatures required for brumation during their somewhat-mild winters. Those who have cold temperatures in the winter find themselves using a heater of some sort to keep their kingsnakes at the optimal brumation temperatures. The ideal temperatures to truly brumate your kingsnakes is anywhere between 45 and 55 degrees Fahrenheit. 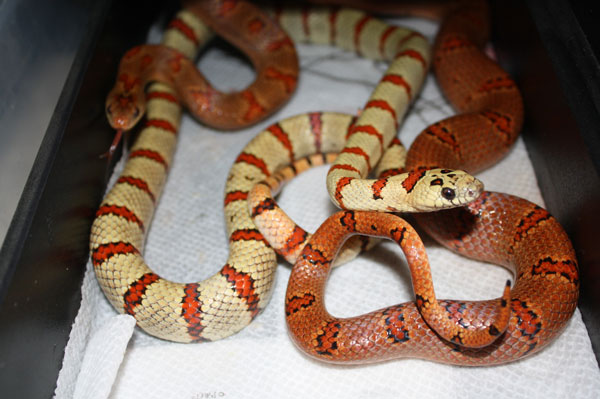 This three-to-four month dormant period should take place in total darkness. Be sure that the kingsnake has a clear stomach prior to lowering their temperature. One proven schedule for brumation is from mid-November until the beginning of March, but there are certainly many that have achieved successful captive breeding utilizing other dates and durations. Provide a clean water bowl for the full duration. Some Mexican kingsnakes will “shutdown” in late fall and refuse prey items. This will be another reason that one would brumate their kingsnakes. Brumation can also be a successful technique utilized for stubborn neonate feeders. It is not dangerous to brumate a neonate if it has sufficient body weight it attained from its egg yolk. Mexican kingsnake neonates are from areas of elevations in the wild. They typically do not reproduce in the early summer like they do in captivity. Wild neonates hatched in late summer or early fall will make it to winter without taking a meal. The arrival of spring and its warm temps brings the neonates out of brumation and typically triggers them to start feeding.

The typical time to awaken your Mexican kingsnakes from their winter slumber is around mid-February to early March. The ambient temperature should be gradually increased to room temperature up to 72 degrees over a week’s time. Many believe that temperatures around 80 degrees or higher for a substantial duration will kill viable sperm in the males or in females after egg follicles have been inseminated. For this reason, many Mexican kingsnake breeders will not turn on the enclosure’s heat source until eggs are eminent, but they will allow the room temps to reach 75 degrees during the day time for feeding and digestion.

After coming out of brumation, offer females prey items every few days. This high-caloric intake will stimulate healthy ovulation. Males should not be neglected at this time. Some males will refuse meals during the breeding season especially when females are releasing pheromones and/or ovulating. Many Mexican kingsnake breeders will bring their males up a week or so earlier than the females in order to get some meals in them prior to this somewhat-common shutdown. After several meals, a female will go into a shed cycle. She may refuse normal sized prey items at this time, so it is ideal to offer smaller prey items to ensure advantageous calories.

This first shed cycle after brumation is often referred to as the pre-ovulation shed. Commonly, the males are either already housed with females or they are introduced when the female shows signs of her pre-ovulation shed. Palpating a female for her “string of pearls” (egg follicles) confirms ovulation. Timing the pairing well and housing breeding pairs or groups together will help ensure that no window of opportunity is missed. Separate breeding pairs for feedings and to wait a few hours before reintroducing them.

If the breeding pair or group is housed separately, pay close attention to the female’s ovulation and time the pairings so that the female’s eggs can be fertilized. Many keepers will commence pairings prior to the pre-ovulation shed and some will wait until after this shed. If the female “bucks” off the male or tail whips him, she is refusing his advances.

If the female is receptive to the male’s advances, copulation will occur. A receptive female will lift her tail and gape her cloaca. To ensure fertilization, multiple “lock-ups” are advised but not always necessary. This breeding period lasts about three to five weeks, after which the female will go into another shed cycle. This second, post-brumation shed is called the pre-egg-laying shed. This is when a nesting area or lay box should be introduced into the female's enclosure. I use moist sphagnum moss in a shoebox for the smaller females. For the larger females, I fill the back half of their enclosure with moist sphagnum moss. Anywhere from two to 14 days after the pre-egg-laying shed, the female will lay her eggs.

Remove the eggs from the nest area and place them in an egg incubation container. This container can be set up numerous ways, but many prefer to use a one-gallon plastic box with a lid. The lid can have holes pre drilled in it or left as is. If the lid has no holes, the keeper must open the egg container every few days to allow for fresh air exchange. Place moist vermiculite, perlite or Hatchrite in the bottom of the container. If using perlite or vermiculite, be sure that it doesn’t have any chemicals, such as Miracle Gro, added. Hatchrite is already premixed with water, but perlite or vermiculite must have enough water added to it so that it clumps when compressed by your hand. The normal ratio is one part water to one part perlite or vermiculite by weight. Some breeders will bury the eggs with just the very tops exposed, and other breeders will place a light diffuser grating between the substrate and the eggs. Placing the eggs on top of the substrate also works.

After the eggs are on the suitable substrate, the lid can be placed on the egg container. The container with the eggs in it must now be placed in an incubator or in an area in which temperatures are between 75 and 82 degrees. The incubation duration varies depending on incubation temperatures, humidity levels and air flow/exchange. Kingsnake eggs have been known to hatch as quick as 45 days at high incubation temps, but these quickly incubated eggs often yield neonates that are very small, and in turn, this makes them difficult to feed on day-old pinky mice. Some breeders will incubate their kingsnake eggs at room temperature. Typically, at this 72 degrees temperature, kingsnake eggs will sometimes take up to 80 days to hatch. Although the babies are very robust and hardy, there is a point in which one does not have to wait 80 days can still hatch out such robust babies. A temperature of 80 degrees has proven to be great for incubating Mexican kingsnake eggs. Typically, at 80 degrees, Mexican kingsnake eggs will begin to pip after 60 days. You should never pull the neonate from the egg. Always allow the snake to emerge on its own. It will sit in the egg for a couple of days while absorbing the yolk. This is normal.

After neonates emerge from their eggs, they need to be set up just like an adult would be but on a smaller scale. A shoebox-sized enclosure is sufficient for the first year of their life. House hatchlings separate. Provide a thermal and humidity gradient with a few inches of shredded aspen as well as fresh water. After the hatchling sheds its skin for the first time, it will typically be ready to eat. Hatchlings are normally 10 or so inches long and will only be able to swallow a small pink mouse. Sometimes hatchling Mexicana kingsnakes require numerous techniques to get them to feed on the frozen/thawed European mice we use as feeders in the industry/hobby. In one clutch, you will have some hatchlings that are great pinky feeders and others that will want only lizards. Many will hold out until a winter brumation period and will not want to eat until the following spring’s warm up.

John Lassiter has been a herpetoculturist, field herper and snakekeeper for more than 20 years, with his main passion being the Mexicana Complex Lampropeltis. John has been working on some interesting Mexicana projects with some of the best stock available. To learn more, visit him at coastalbendcaptivebreeding.com.