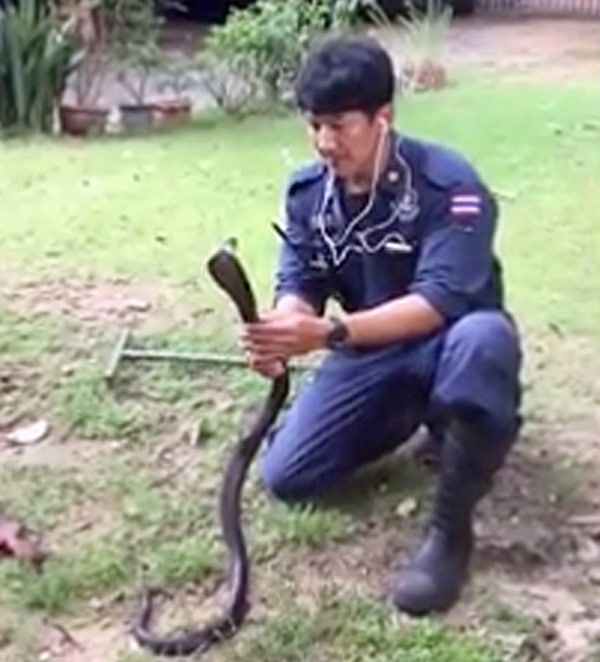 Snake Handler in Bangkok Captures Cobra Like a Boss

The man subdues a venomous cobra with his bare hands.

I am not sure why I trip out at the video of this snake handler in Bangkok, Thailand, as he captures a cobra that was in a woman’s backyard, wrapped up in a flower pot, but the video tells the story.

Perhaps it is because he subdues the venomous snake in a way that I’ve never seen before.

The snake is behind a swing set as the man pulls it by the tail and lifts the snake and the pot and places it on the grass. He then breaks the pot with a rake and slaps the snake on the tail to get its attention. The cobra takes a defensive posture and spreads its hood as the man lifts the snake with his bare hands, with his hand about six inches below the reptile’s head. He then slowly moves his left hand up the snake’s body until he has a firm grasp of the head of the cobra as his fully gloved assistant readies a sack. The man then places the cobra, unharmed into the sack as if he were bagging an ordinary snake. He then wraps the sack closed.

It is an interesting way to capture a cobra, and I am certain the snake handler has many years experience with this type of snake. I am also certain that the U.S. Occupational Safety and Health Administration (OSHA) would not approve of his venomous snake capture methods.