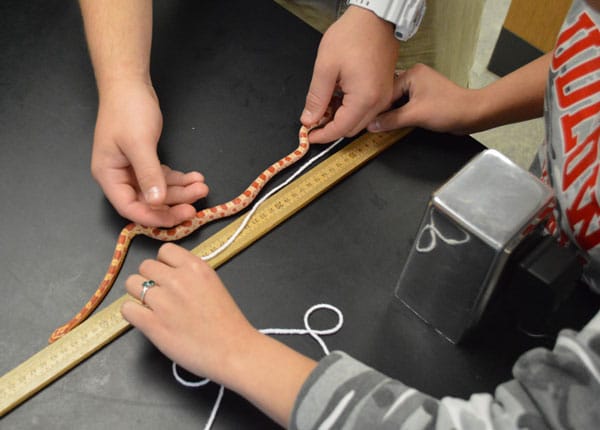 As a high school teacher I am fortunate to have many different opportunities present themselves for unique educational experiences.

As a high school teacher in a high performing district, I am fortunate to have many different opportunities present students for unique educational experiences. Last year, I was given a daily, 30 minute class with varying age groups from grades 9 – 12 to address whatever science weakness I saw fit. This class would rotate every six weeks with new students. Being a herp guy, and well aware of mathematical weaknesses in today’s students, I looked for a way to tie them both together in a way that would keep the students engaged, while doing legitimate scientific work.

I purchased 6 neonate corn snakes (Elaphe guttata) of different color morphs fresh out of the egg and brought them to class.  Two were amelanistic, (#’s 3 & 4), one was a snow (#2), and two were anerythristic (#’s 1 & 5). While discussing the growth and natural history of the snakes with my class, I asked them what questions might be addressed by observation and data collection.  The following points were brought up; 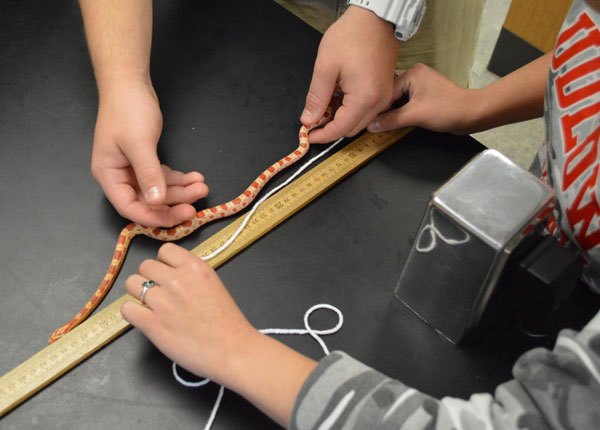 Young cornsnake is getting measured.

To address these issues in the most scientific matter possible, we decided to keep specific growth data on the snakes. All snakes were housed individually in plastic shoeboxes.  Each Monday and Wednesday, the snakes were massed using electronic balances. Each Tuesday, the length of the snakes was recorded. On Thursdays, the food item was massed and the snakes fed. I did not have the class on Fridays. The last question, regarding the comparison of growth rates between neonates and adults was not brought up until October so there is no data for the sub-adult until October. 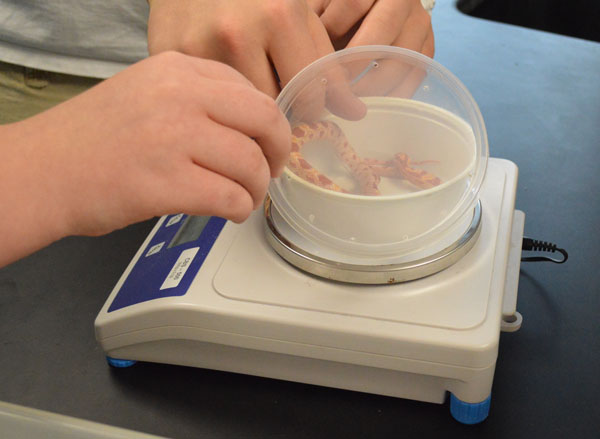 Weighing or massing the cornsnakes on a digital scale.

Massing the snakes turned out to be fairly easy and I feel pretty good about the results being accurate.  Measuring the lengths of the snakes was a bit more tricky and some discrepancies are present in the data.  The students used rulers to measure the length, while some of the more inventive students traced yarn along the body, then measured the length of the yarn. They did learn that actual data collection from living specimens is much more difficult then copying data out of a book.  Rather than include the data from every single day, we averaged a month’s worth of data at the end of the month and recorded that to submit.

Question 1 ) Is there a difference in growth rates between males and females?
Individual 3 (male) showed the least growth, while individual 4 (female) showed the greatest growth. However, number 5 (female) had the second lowest growth rate and number 1 (male) had the second highest growth rate.  Number 2 (female) averaged in between the other four snakes.  (Appendix III)  According to our data, at least in the first year of life, there does not seem to be a direct correlation between growth rates and gender. 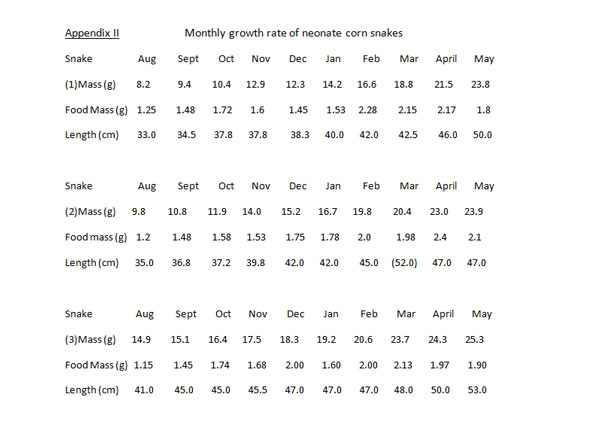 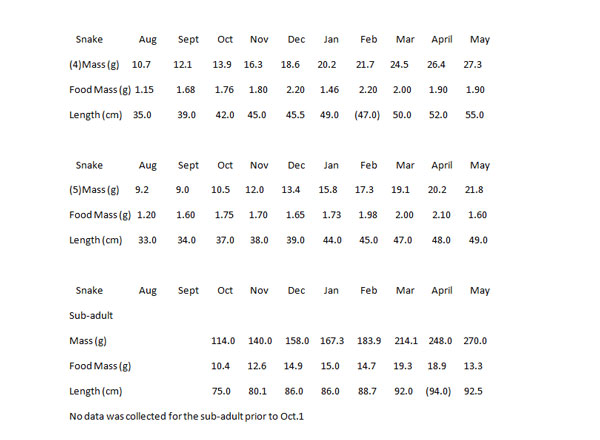 Question 3) Are the growth rates determined genetically or by the actual amount of food they consume?
The average food mass given over the 10 month period for all babies was within one tenth of a gram  (Appendix IV), yet some individuals experienced a larger growth rate than others. Being food was, for all practical purposes, equal, yet growth rate was not, the genetics of the individual is likely to play a greater role in growth rate. 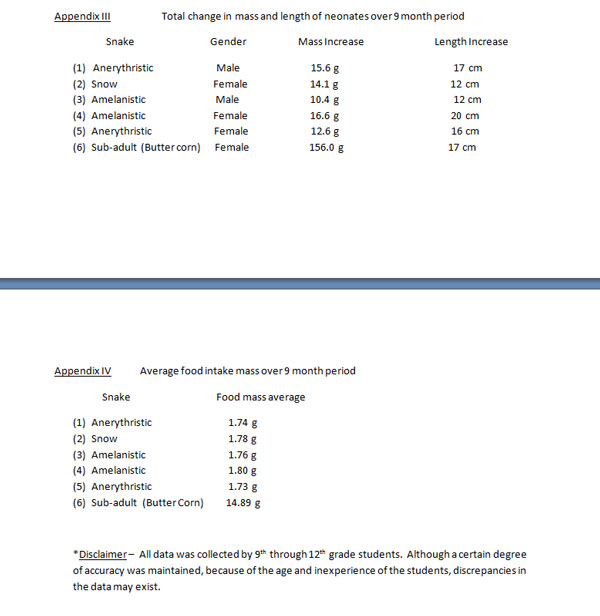 Question 4) How fast do they grow?
Although the speed of growth is a relative term depending on the genetics of the animal as addressed in the previous question, it was possible to predict the growth of the animal quite accurately using linear regression. (See Appendix I)  This was not the case with the length of the sub-adult. The length of this animal did not show a linear increase as in the babies. Although it continued to gain weight in a predictable fashion, its actual length did not keep up. According to our data regarding length, baby corn snakes seem to increase in length quicker than older snakes.

Question 5) Is the mass of food directly proportional to the growth of the snake?
According to our data, the actual mass of the food given to all babies was within a tenth of a gram (Appendix IV), yet the snakes experienced various growth rates.  A direct relationship between the two variables would yield equal growth among all animals. Even though the snakes were being fed equally, the growth rates still varied among individuals of the same species. It remains to be seen, yet seems reasonable, that if the food intake was increased drastically in one or two babies, their growth rate may also increase proportionately.

Question 6)Do older snakes grow at a faster rate than babies?
This was addressed in Question 4 although being only one sub-adult animal was used, (Butter Corn), results may be considered inconclusive. When the experiment started, the snake was two years old. As time progressed and the animal aged, the rate at which it gained mass increased while the rate at which it gained length decreased.

In general, the students were very involved in these activities.  Not only did they learn the techniques and intricacies of accurate data collection and analysis, but they interacted with the snakes on a daily basis and learned a great deal about herpetoculture.  Many students whom entered the class with a fear of snakes (Ophidiophobia), left at the end of their session much more comfortable and unafraid. Several actually wanted to purchase the snakes from me at the end of the year.

Getting Young Corn Snakes To Eat