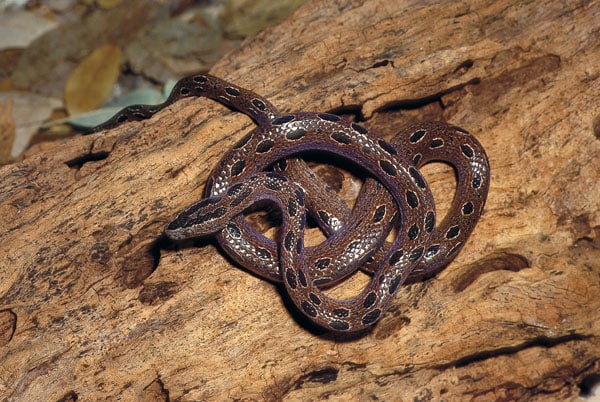 These boas are elusive as much as they are small compared to more well known boas.

Considering all the boid species found worldwide, which would you think is the rarest? Removing the Round Island boa Bolyeria multocarinata from the list might be fair because the last live specimen was seen approximately 30 years ago. It is believed that introduced wildlife might have helped move this species into the extinct category.

Found on a tiny island located between Haiti and Cuba, the Navassa Island dwarf boa (Tropidophis bucculentus) was last collected roughly 100 years ago. It is another probable victim of introduced wildlife.

Although described and known from only a few specimens collected in the 1950s, Cropan’s boa (Corallus cropani), a species indigenous to southeastern Brazil, is certainly a candidate for being the rarest boid. This species’ future looks bleak at best because southeastern Brazil is the most populated part of the country. However, all is not lost. Nearly 50 years after the last specimen was captured, another Cropan’s boa was found in 2003. Another handful of rare boids that may be added to the list are the Angolan python (Python anchietae), the Oaxacan dwarf boa (Exiliboa placata) and some insular Caribbean boas of the Epicrates genus. 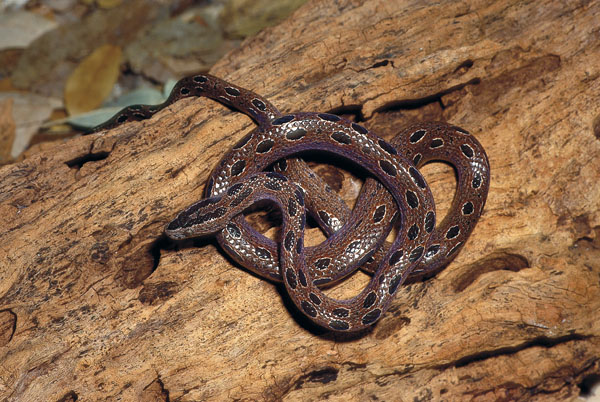 All others aside, one boid definitely is rarely seen despite being known to science for more than 100 years. Middle American dwarf boas of the Ungaliophis genus are a rarely encountered group of small, semiarboreal snakes. Years ago, specimens would appear every once in a while via fruit shipments, which is why the popular name “banana boa” eventually adhered to Ungaliophis panamensis (also called the Panamanian dwarf boa). The occasional discovery of the other species, U. continentalis, in epiphytic growth proved monumental in affecting its popular name: the bromeliad boa. Having an interest in this elusive genus of snakes, I had only played with the idea of actually observing one in the wild.
All of that suddenly changed in the spring of 2000. On an early evening hike in northeastern Costa Rica, I spotted an adult banana boa (U. panamensis) perched approximately 2 feet off the ground on a tree root jutting out across the pathway.

But what lay in store for me the following morning was unheard of. The station manager presented another adult U. panamensis. It was found on a boathouse rafter only minutes earlier than my sighting. Having traveled several times to this region of Costa Rica in the past, I knew that the snakes could be found in the area, but I was under the impression that they were extremely rare. My thoughts have since changed about the apparent rarity of the Ungaliophis genus, which I will explain later.

This interesting group of little snakes was introduced to Western science in 1880 with the published catalog supplement of reptiles and amphibians held in Basel, Switzerland, by zoologist and physician Fritz Müller. Ungaliophis continentalis was described in this supplement, and a description of U. panamensis by Karl Patterson Schmidt of the Field Museum of Natural History in Chicago, Ill., followed in 1933. But even by the mid to late 1960s, only a handful of specimens were even known to science. In 1968 Charles M. Bogert of New York’s American Museum of Natural History published what is still considered the most thorough work on this elusive genus.

These snakes — along with their closest relative, the Oaxacan dwarf boa (Exiliboa placata) — have been in taxonomic disarray when you look at the history of New World dwarf boas. Generally they are placed with the Caribbean dwarf boas of the Tropidophis genus and the eyelash boas (Trachyboa spp.) in the family Tropidophiidae, but they have invariably been placed within the Boidae family at times. However, Ungaliophis and Exiliboa currently are recognized as distinct from the other two genera of dwarf boas, and they have been allocated to a separate family: the Ungaliophiidae.

One of the reasons these interesting snakes are known as dwarf boas is that they truly are small in size. Males average about 16 to 18 inches in total length with females averaging closer to 20 to 24 inches. The largest recorded individual was approximately 30 inches.

Both species are muted in color. Browns, grays and olives predominate as the general base colors accentuated with flecks of orange and black. Superficially these species are easily distinguishable. Bromeliad boas have a series of yellow-edged, egg-shaped markings down their entire lengths, and Panamanian dwarf boas have a series of yellow-edged, triangular-shaped markings. Males of both species have a pair of spurs on either side of the vent, which is a physical trait characteristic of other boids.
These species also are allopatric (nonoverlapping) in distribution. The bromeliad boa (U. continentalis) is found from the Mexican state of Chiapas to northern Nicaragua. The Panamanian dwarf boa (U. panamensis) is found from southeastern Nicaragua to Colombia. From collection data it appears that there may be huge gaps of unknown certainty within the two ranges.

Both species have been reported from lowland to montane (more than 6,560 feet) habitats. Specimens are secretive and have been found under bark, within epiphytic growth and on branches. This leaves a general impression that the snakes are at least partially arboreal in habits. During the clearing of epiphytic-laden trees in Costa Rica during the 1960s, a series of banana boas were found, suggesting that they had been disturbed when the trees were taken down. Furthermore, snakes of this genus often appear in fruit shipments, which also supports the notion of their arboreal tendencies. Although there are no records of these snakes’ prey in the wild, it is thought they may consume both lizards and frogs.

Despite their apparent rarity, a few Ungaliophis specimens have trickled into North America over the years generally from Honduras and Nicaragua. If one looks at reptile dealer price lists from the past 20 years, a conservative estimate would be approximately 100 to 150 specimens have been imported into North America during that time.
I have found that the bromeliad boa is one of the easier species to maintain. It does well in small 5- to 10-gallon aquariums. These snakes are escape artists, so a tight, well-fitting lid or cage door is necessary.

Cypress mulch works well as a substrate, and these snakes will burrow into the mulch, especially as a shedding cycle nears. Live plants are a permanent fixture in my enclosures; one can usually find the bromeliad boa securely hidden within the foliage. These snakes like to climb, so provide a small branch or two. Water bowls large enough to allow the snake to soak are a must. Misting the enclosures will aid in humidity, especially during the warmer months. An optimal humidity during this period should be between 50 and 80 percent.

Feeding these snakes can either be a joy or a real pain. Some specimens readily take small, dead rodents, yet some remain ardent lizard-feeders. The food choice seems to be associated with gender. Females take pinkies and fuzzies, and many males eat nothing but lizards. Scent transfer techniques work to an extent but certainly not all the time.
Offering bromeliad boas food should always be attempted in a very slow, deliberate manner because these snakes are sensitive to quick movements. Using long hemostats or forceps helps facilitate feeding without too much disturbance.

After years of searching for these elusive snakes in the field as well as maintaining them in captivity, I’ve come to the conclusion that bromeliad boas are probably not as rare in the wild as they may seem to be, and several factors help explain why so few specimens are found.

The difficulty in finding these snakes is not only related to their small size but also to other factors, such as their arboreal propensities, nocturnal habits and their secretiveness. Collections are occasionally made 20 feet or more above ground, but it is usually more difficult. It is also more difficult to locate herps at night than it is during the day. Last if not least, these snakes burrow or hide in bromeliads, mosses and other epiphytic growths, which make them even more difficult to find.
The snakes of the Ungaliophis genus are an enigmatic duo, but they may remain one of the lesser known boids for some time to come. Hopefully, captive reproductive efforts will improve as the biology of these snakes is gradually unraveled.