Designing an all-terrain robot for search-and-rescue missions is an arduous and difficult task for scientists. The machine must be flexible enough to move over uneven surfaces, and yet not so big that it is efectively excluded from tight spaces. It might also be required to climb slopes of varying inclines. 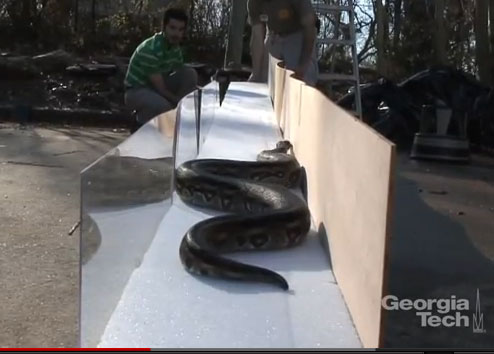 Existing robots can do many of these things, but they usually require large amounts of energy to do so, and are prone to overheating. Georgia Tech researchers have designed a new machine by studying the locomotion of a well-known type of animal that displays great flexibility. 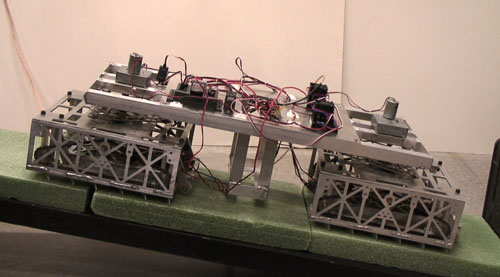 Scalybot 2, the design of which is based on snake locomotion.

While studying and videotaping the movements of 20 different species at Zoo Atlanta, Marvi developed Scalybot 2, a robot that replicates rectilinear locomotion of snakes. He recently unveiled the robot for the first time at the Society for Integrative & Comparative Biology's (SICB's) annual meeting in Charleston, S.C.

"During rectilinear locomotion, a snake doesn't have to bend its body laterally to move," explained Marvi. "Snakes lift their ventral scales and pull themselves forward by sending a muscular traveling wave from head to tail. Rectilinear locomotion is very efficient and is especially useful for crawling within crevices, an invaluable benefit for search-and-rescue robots."

Improving the Popular Image of Snakes

Scalybot 2 can automatically change the angle of its scales when it encounters different terrains and slopes. This adjustment allows the robot to either fight with or generate friction. The two-link robot is controlled by a remote-controlled joystick and can move forward and backward using four motors.

"Snakes are highly maligned creatures," said Joe Mendelson, curator of herpetology at Zoo Atlanta. "I really like the fact that Hamid's research is now showing the public that snakes can help people."

This follows up previous research by David Hu, an assistant professor in the Schools of Mechanical Engineering and Biology, into the same area of snake locomotion. Last summer, the team at Georgia Tech developed Scalybot 1, a two-link climbing robot that replicates concertina locomotion. Its push-and-pull, accordion-style movement features alternating scale activity.