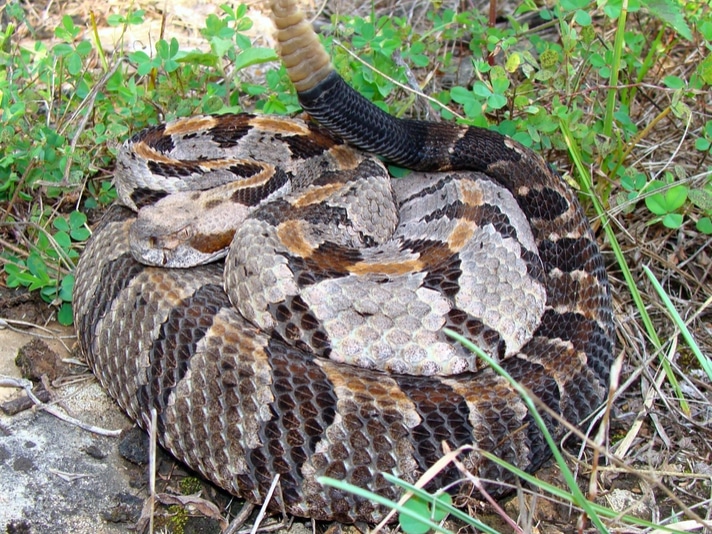 Four Men Get Probation For Killing And Grilling Timber Rattlesnake

Officers wrote a total of 32 citations, including destroying an endangered species.

Four men camping in Western Maryland over the summer pleaded guilty to possessing or destroying a timber rattlesnake (Crotalus horridus)
in the the state’s Green Ridge State Forest in Allegany County. The judge in the case fined the four men $500 each, with $300 suspended for destroying the rattlesnake. More fines were levied for the other charges, but their guilty pleas will be expunged from their record if they successfully complete the court ordered probation.

The men, Austin William Golas, 18, Paul Harold Lafon IV, 19, Travis Christopher Luedtke, 18, and Erik Lee Reffitt, 19 were charged with killing and then grilling a timber rattlesnake, which is a protected species in the state, after Maryland Natural Resources police officers happened upon the five men and two juveniles fishing near a boat ramp. They stopped to check their fishing licenses and took a look at their campground. The resources officers found several trees that had been chopped down, the dead venomous snake that was apparently killed with a BB gun, marijuana and what was believed to be LSD, according to the Capital Gazette.

The officers issued 32 citations, including destroying the timber rattlesnake, a protected species in the state, destroying trees in a state forest, target shooting at a campsite, fishing without a license, and possession of marijuana.

The timber rattlesnake is listed as an endangered species in the state of Maryland. One of the larger rattlesnakes, the timber rattler can grow to more than five feet with the largest recorded at a few inches beyond 6 feet. Large specimens can weigh nearly 10 lbs. Typical adults will be near 40 inches.