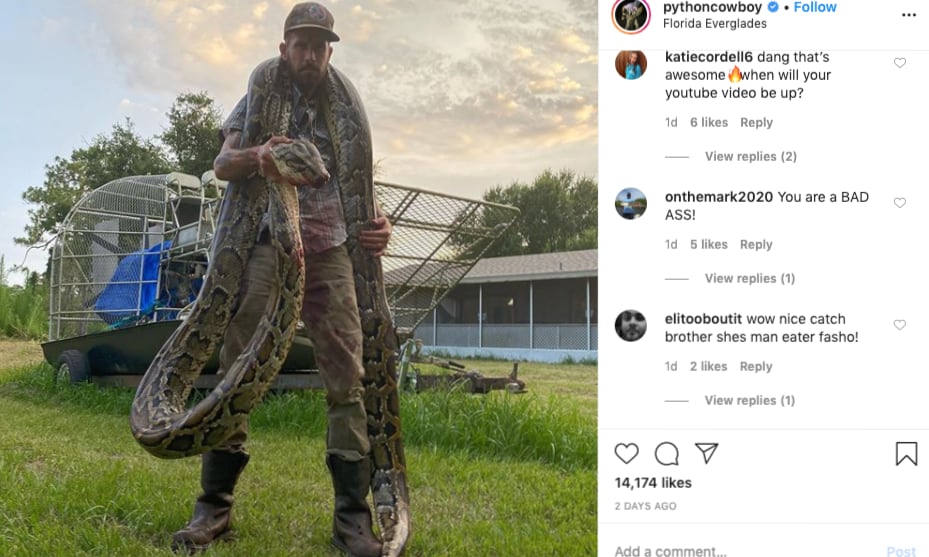 “I noticed her almost immediately as soon as we crossed paths, I could barely contain my excitement,” Kimmel wrote on his Instagram Page, pythoncowboy. “She definitely was not afraid of me and started to slowly cruise through the vegetation as I carefully walked next to her trying to gauge exactly how large she was… because of all the grass and weeds it was hard to tell but I could tell she was an absolute monster. Her being tangled in vegetation makes the capture that much more difficult, a snake this size will use the vegetation as leverage and can literally pull you into the swamp, no stopping 150lbs of SOLID muscle.”

Kimmel then was in for the fight of his life with the massive, invasive species. The snake, according to Kimmel, was striking at him and finally bit him on the forearm and bicep. He began to bleed profusely as he wrestled with the reptile, working to tire her out.

She “only got me once but that’s all it took… I was punctured quite deep on my bicep and forearm, piercing an artery and hitting some nerves, I was lucky she didn’t latch on and that I was able to pull out of it. After losing about a gallon of blood, lol, I was able to tire her out and get her under control. I then used a snake bag I had on my waist to tourniquet my arm because I was getting worried about how much blood I was losing, better safe then sorry. I then had to drag all 150lbs of her alive, working to control my breathing so I didn’t pass out from blood loss and the extreme heat that day, I would have been screwed.”

After he got the snake to his boat, he euthanized it with his suppressed .22 pistol.

Kimmel’s snake is very close to the record. He will post the results on his YouTube channel on June 12.

The Burmese python is an invasive snake that is thriving in the Florida Everglades. They can grow to more than 20 feet in the wild and weigh more than 200 pounds. Their native range is in Southeast Asia, including Thailand, Vietnam, Indonesia, and Myanmar.