Eighteen smooth green snakes (Opheodrys vernalis) that were hatched in a breeding program at the Lincoln Park Zoo in Chicago are being prepared for release back into the wild at Lake County Forest Preserve. The snakes have been fed a steady diet of crickets and worms to monitor their progress and to determine which specimens will make the best candidates for release back into the wild. 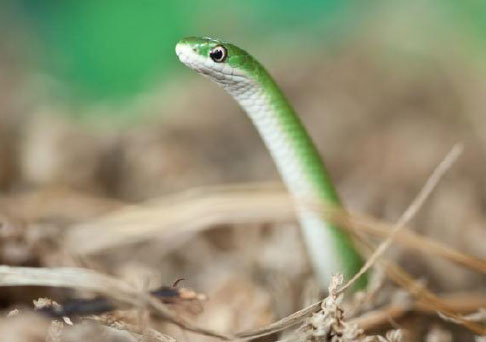 Those that were deemed the best candidates for release were part of a "soft release" whereby the snakes spend some time getting accustomed to the wild but still remain contained in a controlled and managed environment that is designed to limit their exposure to predators. This is the second batch of smooth green snakes released by the zoo as part of its recovery program.

The smooth green snake (Opheodrys vernalis) is non-venomous and bright green in coloration with a white belly. It grows to about two feet in length and can be range from northern Canada to the southern United States and northern Mexico. The snake can also be found in Wyoming and New Mexico. Its habitat includes grassy areas on prairies as well as in marshes and near lakes. The smooth green snake feeds on small insects, including crickets, grasshoppers, caterpillars, spiders and beetles.

The smooth green snake has been on the decline in their native ranges due to habitat destruction as well as pesticide use. It is categorized as an Illinois Species in Greatest Need of Conservation. The Lincoln Park Zoo continues to work to restore the smooth green snakes to northern Illinois in conjunction with the Lake County Forest Preserve District.