Seized from smugglers in Hong Kong, 13 ploughshare tortoises (Astrochelys yniphora) will be placed in England and the Netherlands.

The distinctive ploughshare tortoise (Astrochelys yniphora), known in its native Madagascar as angonoka, faces a very uncertain future. Loss of its dry forest habitat to agricultural grazing for cattle, and capture for the illegal pet market in South Asia has meant that this species has now become one of the rarest tortoises in the world. 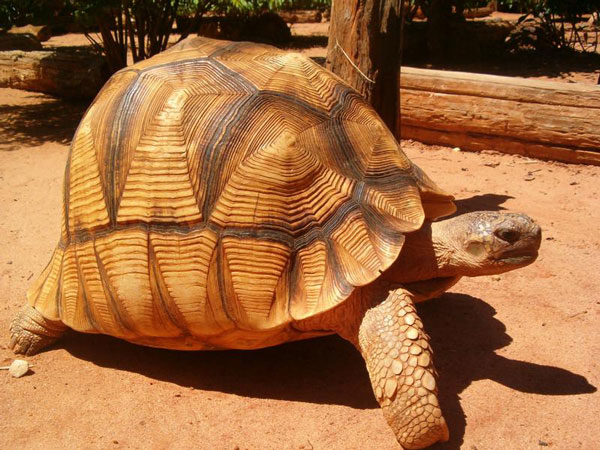 Against this backdrop, the Durrell Wildlife Conservation Trust, a UK-based organization headquartered in Jersey in the Channel Islands, has been working to conserve the species in its natural habitat. A captive-breeding program on Madagascar, started in 1986, resulted in the first youngsters found in the wild that were hatched from the eggs of tortoises bred and released from the program.

Even so, conservation work with this species has a long way to go, especially as the facility on Madagascar has been raided, with some of these tortoises being stolen. Now however, a total of 13 ploughshare tortoises have passed into the care of three respected zoological institutions in Europe. These were seized from smugglers at the airport in Hong Kong in 2009 and 2010. Durrell Wildlife Conservation Trust in Jersey, as well as Chester Zoo, located in the northwest of England, and Rotterdam Zoo in the Netherlands are each receiving some of the animals.

Matthias Goetz, Head of Durrell’s Herpetology Department, said: “Thankfully, the rescued tortoises were given to the Kadoorie Farm and Botanical Garden (KFBG) wild animal rescue center in Hong Kong, which took great care of them and started working with international partners to identify new homes for the animals. Along with the other two European institutions, Durrell is delighted to be receiving some of the tortoises and playing a part in a new captive breeding program which aims to save these beautiful creatures from extinction.”

There are a further 20 of these tortoises already resident in three collections in North America, and the European breeding program will be run alongside its American counterpart, as well the conservation work being undertaken with the species in Madagascar.

Dr. Gerardo Garcia, curator of lower vertebrates and invertebrates for Chester Zoo, stressed that the results would not be immediate.  He explained: “As with all things associated with tortoises, it will take a while before these animals are ready to breed.

“They are only young and it will take a few years for them to reach maturity. But what is important is that the European breeding program has now started and in the future, seized ploughshare tortoises will form part of an international safety net population, should the worst happen to the remaining tortoises in Madagascar.”

According to Matthias Goetz: “Sadly, an increasing number of these reptiles have been smuggled out of Madagascar through South Asian countries where more and more have been seized by border authorities. While it has been possible to repatriate some, this is challenging and if the tortoises have spent time outside of Madagascar, there are disease risks to bringing them back. Equally, establishing a viable international breeding program for the species has been identified as one of the key approaches to ensuring the species’ survival.”

At least now therefore, with the establishment of another captive-breeding group, the long-term future of the species, as well as the available gene pool, has improved.