Two species of sea snake that are identical genetically but not physically evolved from a single species.

Scientists with the University of Adelaide and the South Australian Museum have determined why some sea snakes have developed smaller heads and physical features than related species that differ only primarily in size. The reason, the scientists say is because the slender-necked sea snake has evolved, with its head getting smaller over time due in part to the type of prey they prefer, snake eels, which live in sand burrows. 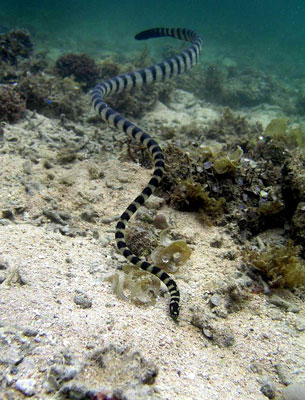 Slender necked snake foraging in waters off the Ryuku Islands.

"A team led by my colleague Dr. Kate Sanders (University of Adelaide) has been investigating genetic differences across all sea snakes, and we noticed that the blue-banded sea snake (Hydrophis cyanocinctus) and the slender-necked sea snake (Hydrophis melanocephalus) were almost indistinguishable genetically, despite being drastically different in size and shape, said Dr. Mike Lee of the South Australian Museum. "The slender-necked sea snake is half the size, and has a much smaller head, than the blue-banded sea snake. This suggested they separated very recently from a common ancestral species and had rapidly evolved their different appearances."

The evolution of the shrunken head on the slender-necked sea snake also led to speciation, in which one species splits into two distinct species. They also confirmed that the populations of the slender-necked sea snake, which are smaller in size than their ancestors, avoided interbreeding with their larger ancestors. Their studies could also  lead to other studies of speciation and adaptive radiation (process in which organisms rapidly change into different forms) in marine environments. Check the video of a blue banded sea snake shedding its skin.