It is unclear why venom is becoming more potent in California rattlers.

This is the time of year that the risk of suffering a snake bite increases significantly in the United States, according to Richard Clark, MD, director of the Division of Medical Toxicology at UC San Diego Health System. There are some 800 bites recorded in California alone, representing about 10 percent of the total number nationwide. 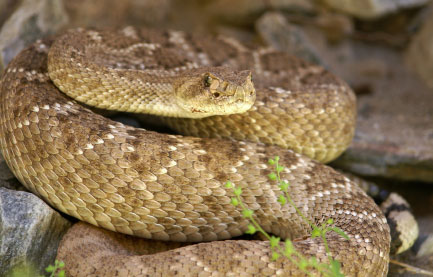 Rattlesnakes are the only venomous group of snakes in the state, with most victims ending up being bitten on their hands and feet. This causes swelling and underlying tissue damage, but the effects can vary significantly. The situation can also become confused by the fact that in some cases, although the snake bites, no venom is injected into the wound. Nevertheless, since it is impossible to determine whether this is in fact what happened, so medical treatment is still required as a precautionary measure.

Seasonal Changes
The impact of the venom itself varies too, partly according to the season, being less potent in the winter and more powerful at this time of year when the snakes are active and hunting prey. Yet it also apparently shifts from year to year, and there is growing concern among scientists that the bites of these snakes are now proving to be more deadly.

“We really don’t know why the venom is becoming increasingly potent. Some speculate that with the modern world encroaching on nature, it could be survival of the fittest. Perhaps only the strongest, most venomous snakes survive?” says Clark. “The anti-venom is costly at around $2,500 a vial. Patients may need a series of anti-venom shots and insurance does not always cover the treatment.”

Serious Effects
In more severe cases, intense pain results at the site of the bite, being followed by swelling within the mouth and throat, often causing difficulty in breathing. Lightheadedness, nausea and collapse are other symptoms that can occur soon after a rattlesnake bite.

“Many of our snake bite victims show symptoms of severe weakness, have trouble breathing and low blood pressure,” said Clark who is also medical director for the California Poison Control System (CPCS), San Diego Division. “For anyone who suspects a bite, their next move should be to a hospital emergency department.”

*The California Poison Control System (CPCS) is available at 800-222-1222, 24 hours a day, seven days a week for immediate expert help and information in case of poison exposure, including snake bites.