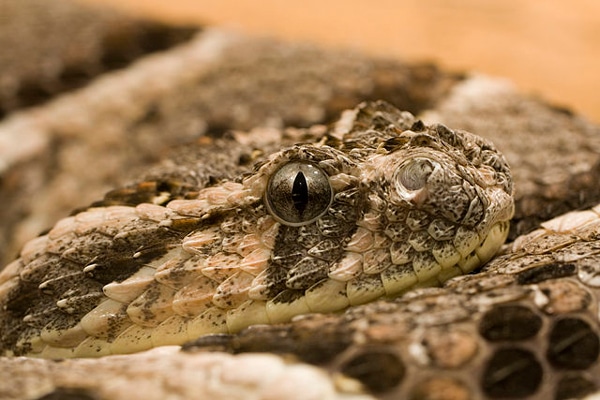 Puff Adders Are Masters Of Disguise And Smell

The puff adder (Bitis arietans) is a master of camouflage but did you know that it can also mask its scent to make it nearly invisible to animals that rely on scent to find prey items? That is right, the venomous puff adder is also a master of scent camouflage.

Researchers with the University of the Witwatersrand’s School of Animal, Plant and Environmental Sciences in Johannesburg, South Africa, trained dogs and meerkats to determine whether these animals could detect puff adders via olfaction, or via sense of smell. They also trained the animals to detect via smell, five species of active foraging snakes versus ambush snakes like the puff adder.

What their research determined was the dogs and meerkats could easily detect the foraging snakes–their accuracy in locating them was better than 80 percent.  They were unable, however to detect either the captive or wild puff adders.
The puff adder hides itself scent-wise via what scientists call chemical crypsis, which basically means it can mask its scent so as to go undetectable. The researchers speculate that other ambush snakes may also mask their scent to remain undetected.

The puff adder is found in nearly all of sub Saharan Africa, South Africa, and on the Arabian Peninsula into Saudi Arabia and Yemen. It is found in most habitats with the exception of true deserts, rain forests and tropical alpine habitats. They feed on small mammals, birds, amphibians and lizards. It bites more people in Africa than any other snake. The venom of this species is one of the most toxic of viper based on LD 50 values. Symptoms can include bleeding and swelling, hemorrhages, and deep necrosis.