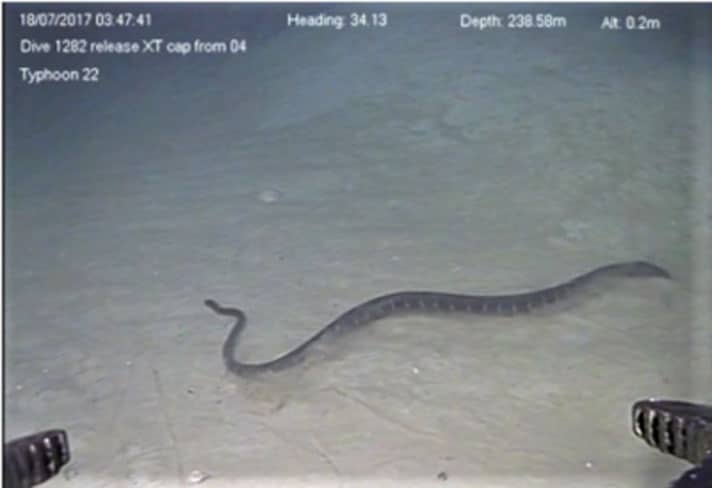 The sea snakes were poking their heads in the sand looking for food.

Australian researchers studying sea snakes (Hydrophiinae sp.) have verified video recording of them diving to more than 240 meters, beating the previous known record of 133 meters by the ocean going reptiles, according to a study published in Austral Ecology. The snakes were recorded at the depth by INPEX Australia, an exploration and production company that captured the footage at the Browse Basin on Australia's North West Shelf off the Kimberley coast of Australia. 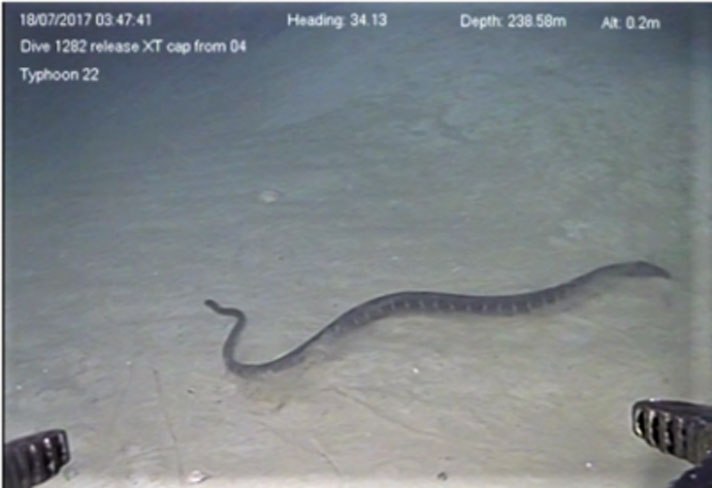 This sea snake was recorded at 238 meters off the coast of Australia.

"Sea snakes were thought to only dive between a maximum of 50 to 100 metres because they need to regularly swim to the sea surface to breathe air, so we were very surprised to find them so deep,” Dr. Jenna Crowe-Riddell, a Ph.D graduate at the University of Adelaide’s School of Biological Sciences, and lead author of the study said in a statement released by the university.

“We have known for a long time that sea snakes can cope with diving sickness known as ‘the bends’ using gas exchange through their skin,” Crowe-Riddell said. “But I never suspected that this ability allows sea snakes to dive to deep-sea habitats.”

Crowe-Riddell said the snakes were poking their heads in burrows in the sand, looking for food but she was unsure what type of species the snakes were hunting at that depth. That depth (200m to 1000m) is also known as the twilight zone because so little light can penetrate that deep.

INPEX recorded the snakes swimming at those depths in 2014 and 2017 using an ROV or remote operated vehicle, while working on the INPEX-operated Ichthys Liquid Natural Gas project. “INPEX is proud to support this invaluable research that adds to understanding of sea snakes and deep marine habitats, as part of our commitment to protecting the environment,” Craig Haymes, INPEX director of health, safety, environment and quality said in the statement.

An abstract of the study, "First records of sea snakes (Elapidae: Hydrophiinae) diving to the mesopelagic zone (>200 m)" can be read here.