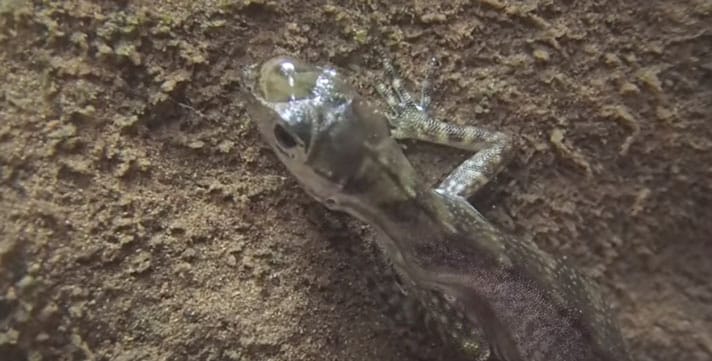 Ecologist Lindsey Swierk believes the temporary bubble on top of the aquatic anole's head enables it to breathe underwater.

Ecologist Lindsey Swierk of  Binghamton University in New York just released video footage of an aquatic anole in Costa Rica, staying submerged underwater for 16 minutes, and would have more than likely stayed submerged even longer had her team not disturbed the reptile. 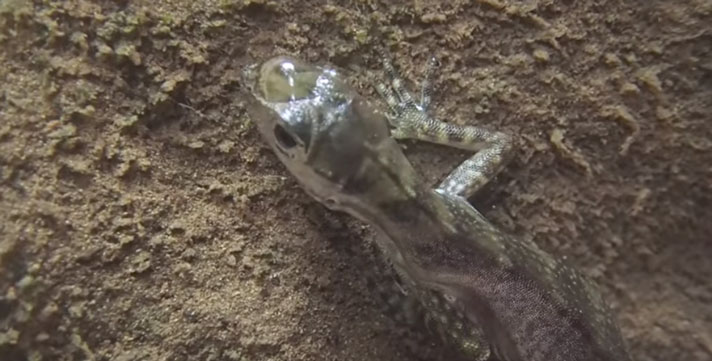 Ecologist Lindsey Swierk believes the temporary bubble on top of the aquatic anole's head enables it to breathe underwater.

Swierk  has been studying the water anole (Anolis aquaticus) for the last several years and recorded the footage in 2015 as she was attempting to capture the reptile.

“I remember it clearly because that lizard was going to be the last one my team was processing that day,” Swierk told Gizmodo. “Three of us were approaching the lizard to capture it, and it dove into a relatively shallow area in the stream surrounded by rocks… In the end, we disturbed the lizard at the 16 minute mark—something that of course I regret now, wondering how long it would have naturally remained submerged otherwise.”

Swierk returned to the stream a few years later, equipped with a video camera to capture footage of the lizard underwater. What she documented shows that the lizard is able to stay under water because, she believes, the lizard breathes in a bubble. The reptile periodically releases air from its snout, which stays on the lizard’s head as a bubble and expands in size and then shrinks, as if the lizard is using the air in the bubble as a scuba tank of sorts.

Over the past few years, I’ve been accumulating evidence that the water anole (Anolis aquaticus) might be a tiny scuba diver in the streams of its home in southern Costa Rica,” Swierk wrote on Anole Annals, a website dedicated to the study of Anole lizards. “Anolis aquaticus takes to the water as refuge from predators, swimming and often diving underwater for long periods of time – the record at my study site is currently 16 minutes! To enable these crazy-long dives, it’s possible that anoles may have come up with a scuba-tank method of sorts to “breathe” underwater.  I’ve compiled a video of what appears to be underwater respiration of a recycled air bubble that clings to the anole’s head.”

Swierk is working on a paper on this lizard’s underwater capabilities in the March 2019 issue of Herpetological Review.