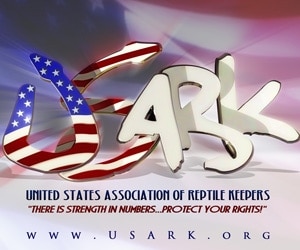 Update on reptile legislation throughout the United States.

On Wednesday June 11, USARK filed its opposition to a motion by FWS to dismiss it's lawsuit. USARK has challenged the Service's listing of the Burmese python, Indian python, Northern African python, Southern African Python and Yellow anaconda as "injurious" under the Lacey Act. For many reasons, including the bad science used to justify the listing that was not properly peer-reviewed, the species should not have been listed as injurious.

This is the Government's second attempt to have USARK's lawsuit thrown out of court. The government again argued that USARK and its members do not have interests in the environment sufficient to allow it to bring forth claims under the National Environmental Policy Act (NEPA). NEPA requires the government to analyze impacts of its actions on the "human environment." FWS also completely ignored a number of important ecological concerns raised by USARK and others during the process.

The Government also claims that our allegation that the Lacey Act does not prohibit interstate commerce for listed species is time-barred, or claims the statute of limitations has expired. It argues that a 1965 regulation settled this question.

None of the Government's claims have merit.

In its latest filing, USARK demonstrated that the environmental interests of USARK and its members support their standing to bring the NEPA claims. USARK also showed that FWS' unlawful ban on interstate commerce and transportation should be overturned. Once again, USARK has defended their stance that the Lacey Act, as written, does not have jurisdiction to prohibit the interstate transportation of injurious species among states within the continental U.S. FWS has chosen to interpret the statute in this manner and has never been challenged as they have never listed species as injurious that are commonly kept as pets or have substantial financial impact.

The Government has an opportunity to respond to USARK's arguments. The motion will then be submitted to the Court for decision.

USARK anticipates the motion to dismiss will be denied and the legal issues can then be briefed. We will have additional updates as they become available.

You can view the latest filing at www.usark.org/wp-content/uploads/2014/06/USARK-Opposition-to-FWS-Motion-to-Dismiss-6.11.14.pdf.


A proposed list of animals to be listed as "Dangerous Wild Animals" in West Virginia has been released. This list is far overreaching and will bring huge opposition from all corners of the pet world. To mention just a few animals that will bring uproar: all hamsters (except Golden hamsters), all turtles and tortoises, hedgehogs, sugar gliders, all salamanders and pufferfish. You can view the complete proposed list at www.usark.org/wp-content/uploads/2014/06/West-Virginia-DWA-Proposed-List-6.11.14.pdf.

A group of "experts" compiled the list. Their reasoning for listing many completely harmless species is that they, "present the threat of disease to humans." Responsible personal hygiene and child supervision prevents all zoonotic (spread of disease between animals and humans) disease transmission. Pet keepers and Americans are continually threatened by the actions of a few irresponsible people. Collective punishment (punishment of the whole due to the actions of a few) continues to ravage American freedoms due to propaganda pushed by animal rights (AR) groups.


The listing of many species clearly demonstrates a lack of knowledge. The group denied assistance from USARK and qualified WV herpers. However, this is not the finalized list and USARK continues to work on the issue.

As always, it is of utmost importance to always present yourself in a civil and professional manner when responding to legislative issues. Acting differently will only hurt our cause and build walls between responsible pet keepers and legislators.

Two Tortoise Species Petitioned to be Listed under ESA

The Spider tortoise (Pyxis arachnoides) and Flat-tailed tortoise (Pyxis planicauda) are being proposed for listing under the Endangered Species Act (ESA). This includes any subspecies. While listing a species under the ESA may sound positive, it can actually greatly hamper and destroy conservation efforts.

When non-native species (the mentioned tortoises are from Madagascar) are listed under the U.S. ESA, usually little is done by the U.S. to effectively help save these species as the U.S simply does not have the funding or expertise to save species all over the world. The USFWS is pressured by petitions and lawsuits from "environmental groups" that may or not have good intentions. Unfortunately, even conservation and the advertised saving of endangered species can be abused only to make money and do little or nothing to save species. Just like many "animal welfare" groups (that are actually extremist animal rights groups, "conservation and environmental" groups are not always what they seem and often use fraudulent advertising. Even well-meaning groups may not understand the ramifications of their actions.

What may happen, is interstate transportation of these species may become unfairly regulated, or even illegal, and someone who breeds these animals that are endangered in the wild, would not be able to send offspring to other breeders or facilities to save the species. As deforestation, industrialization, pollution and human overpopulation continue to decimate wild populations of animals, captive breeding and keeping of these species will be all that remains as their natural habitat is destroyed.

Dedicated and passionate herpers have been establishing genetically-diverse breeding groups of these species for many years. The little money collected by selling offspring to zoos, museums and other advanced hobbyists will never cover their expenses. Comments will be due to USFWS by Sept. 8 and USARK will provide additional details. If you work with these species and would like to provide information, please send an email to info@USARK.org.

Here are links to pertinent information:

The raffle ends July 4th and one person will win over $35,000 in prizes! Buy tickets and check out what you can win at www.raaca.net. Also, be sure to visit and join the Reptile And Amphibian Charity Auction (RAACA) page at www.facebook.com/groups/RAACAUCTIONS to stay updated and get some intermittent comic relief. A huge thank you to all involved from USARK, including Jordan Russell, Myke Clarkson, Houssam Istanbouli and the sponsors: Freedom Breeder, BHB Reptiles, The Reptile Shop, SC Constrictors, The Boaphile (Jeff Ronne), TSK Feeders and Herp Nation Media.


The show is June 21-22 in Wichita, KS, and the promoters of the show are holding an auction to benefit USARK. Contact Norm Barrett with any questions at centraloklareptileexpo@yahoo.com or 214-728-4588. Get show details at www.centraloklareptileexpo.com. Thanks to all involved and have a great show.


The 37th IHS hits Riverside, CA on July 16-19. This event includes talks from noted herpers including Bill Love, Russ Gurley, Sean Bush, Jeff Lemm, Jim Harrison, Brian Barczyk and many others. This year will also include a chance to visit the L.A. Zoo and field-herping opportunities. Get all the details at www.internationalherpetologicalsymposium.com and Like their Facebook page at www.facebook.com/InternationalHerpetologicalSymposium.

It will be here soon! The Reptile Super Show is July 12-13 at the Concourse/Civic Center in downtown San Diego, CA. The USARK benefit auction is Saturday night at 6:30. This is one of the largest shows of 2014. Come join in the fun of the Reptile Super Show and show your support for USARK. Thank you to Ramy and the Super Show crew for your continued support. Get show details at www.reptilesupershow.com/san-diego.

Future Herper and a Pro-Snake Message


So I guess this is when you have to ask yourself… "IF this little girl isn't afraid of snakes, then why should you be!?"


"All About Snakes just had to post this awesome photo of Daphne Kincaid's 5 year old daughter Taylor who loves snakes just like her big sister Kelsie Kincaid. She played with this 5½ ft rat snake for an hour." – AAS (Check them out at www.facebook.com/allaboutsnakes)

National Amphibian Expo: August 9 in Indianapolis, IN. Get more details at www.naexpo.org/show and buy shirts at www.teespring.com/naexpo.