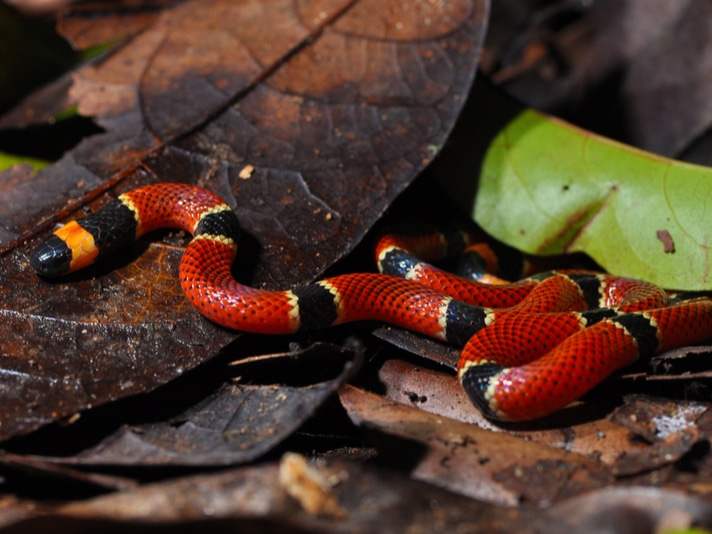 New Snake Species Discovered Inside The Stomach Of Another Snake

Researchers have discovered a new species of colubrid snake that was the meal, 40 years ago, of a Central American coral snake (Micrurus nigrocinctus). The snake, Cenaspis aenigma, or dinner snake, had been preserved and was in storage when researchers decided to study the reptile. The  Central American coral snake was captured by a local palm harvester, Julio Ornelas-Martınez, in 1976. When researchers opened the venomous snake up, they discovered another snake in its belly, but decided to preserve it, setting it aside.

Posted by Herpetological taxonomy, phylogeny and systematics on Thursday, December 6, 2018

Jonathan Campbell, a herpetologist with the University of Texas, just completed a study of Cenaspis aenigma and determined that it is not only a new species, but also a new species with its own genus, according to Campbell’s study, “Caudals and Calyces: The Curious Case of a Consumed Chiapan Colubroid” which appears in the Journal of Herpetology.

According to Campbell, Cenaspis aenigma measures about 10 inches in length and has an elongated skull shape and plain scales. It is believed that the reptile is a burrowing snake and most probably feeds on insects and spiders. The snake has not yet been found alive in the wild, so it is not certain what it eats or how it lives, Campbell told National Geographic. “This is the first time a new genus has been found in the stomach of a coral snake.”