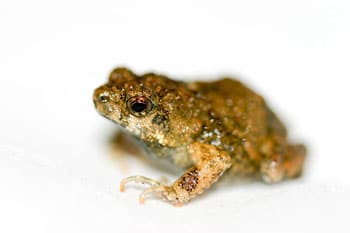 University of Texas and Salisbury University biologists detail how complex traits of túngara frog could emerge from simpler traits.

Scientists at the University of Texas at Austin and Salisbury University in Maryland have built a faux túngara frog (Engystomops pustulosus) complete with a fake mating call to study how female tungara frog's react to the bogus mating call of the fake frog. Their study, published in the journal Science, found that female tungara frogs could be tricked into becoming attracted to an artificial call that doesn't resemble the mating call of the túngara frog in the wild. Biologists Michael Ryan and Ryan Taylor created a fake frog complete with a fake mating call to attract a the female. And it worked. 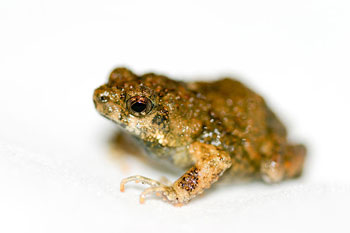 Female túngara frogs choose a mate by listening to the sounds emanating from a male tungara frog. Those sounds are based on a series of "whines" and "chucks" the frog makes to attract a mate. The male also inflates its vocal sac to help attract the female visually. Ryan and Taylor's fake frog belted out the mating calls, but cue'd the "chuck sound" late to the "whine" which does not happen in nature. When they strung the sounds together, however, the biologists believe that the visual aspect of the study, the vocal sac, rescued the chuck sound, helping to "bind" the two sounds together. A female tungara responded and came to investigate the fake frog. Individually, the sound emanating from the fake frog did not attract a female, nor did the vocal sac expanding, but working together, the experiment successfully attracted the female.

"It never would happen in nature, but it's evidence of how much jury-rigging there is in evolution, that the female can be tricked in this way," Ryan, the Clark Hubbs Regents Professor of Zoology in the College of Natural Sciences at The University of Texas at Austin said in a statement.

Ryan says that túngara frogs are exposed to an auditory world that is similar to that of humans in noisy environments and this "cocktail party problem" as called by cognitive scientists, has to be deciphered by the female frog. These breeding choruses complete with imagery are competing with the female frog at different times as she works to choose a mate. The female has to in essence, separate the noise that is meaningful to her from all the competing sounds. He says that neural mechanisms that the frog can parse in nature is being hijacked by the fake sounds coming from the artifical frog.

"It's an example of how complex traits could emerge from simpler ones," he said. "In this case there's no obvious advantage to these two behaviors being hooked together in this way, but think of how you can take a muscle and move its insertion on the bone and have a great influence on speed. You didn't get the evolution for these bones and muscles all at the same time, but just by making a change or adding a muscle, now you change the functional coupling. You end up with something really complex, but it evolved in a really simple way. I think in this case we may be seeing an example of how that could happen."

The túngara frog, a species of least concern according to CITES, can be found throughout most of Central America, including Belize, Colombia, Costa Rica, El Salvador, Guatemala, Honduras, Mexico, Nicaragua, Panama, Trinidad and Tobago, Venezuela. Its native habitat includes subtropical and tropical dry forests, dry and moist savannas, and subtropical and tropical dry lowlands, marshes, pastureland, ponds, canals, and ditches.