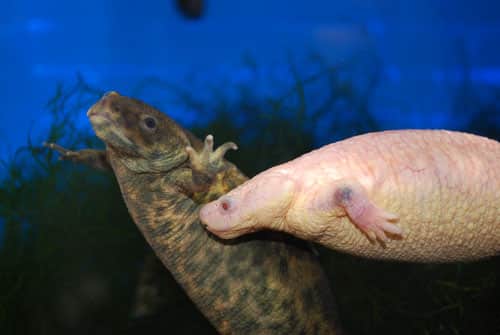 When It Comes To Love Songs, Female Gray Tree Frogs Are Pretty Picky
Clown Treefrog Care And Breeding
How To Breed Tiger-Leg Monkey Frogs In Captivity

Ribbed newts reproduce very easily under captive conditions. If you originally obtained young animals, they will start to show noticeable differences in body structure at 8 to 10 months of age. I keep adult newt pairs in 10-gallon bare-bottom aquariums, which contain about 8 gallons of water and a large portion of live java moss (Vesicularia dubyana). In the two weeks prior to spawning, pairs are fed well with live earthworms, freshly shed mealworms and commercial newt or aquaculture pelleted food. After a week or two of increased feeding, you will notice the female becoming swollen with eggs and the male will have visible rough nuptial pads on the inner surface of his forelimbs and a well-developed dorsal tail crest. Both sexes will display dorsal and ventral tail crests, but the males will be larger and more exaggerated. 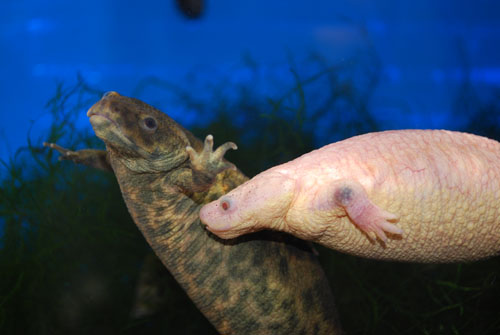 These are two female Spanish ribbed newts: a normal-colored one and a leucistic one.

To induce courtship and spawning behavior, siphon 90 to 100 percent of water out of the tank, but do not remove the newts. Refill the tank with clean non-chlorinated water a few degrees cooler than the water you removed. Within a few hours, sometimes sooner, the male will start to pursue the female. He will swim underneath her and rub against her throat with the top of his head. Usually within 30 minutes of this courtship he will position himself under the female and attempt to latch onto her by hooking his long forelimbs over the top of her forelimbs. Once locked in this mating embrace (amplexus), the pair can remain in this position for several hours. Eventually, the male will deposit a small spermatophore on the bottom of the tank. While attempting to position the female over the spermatophore, so it can be picked up, the male will release one forelimb and pull her in a circular motion until her cloaca is directly over the sperm packet. 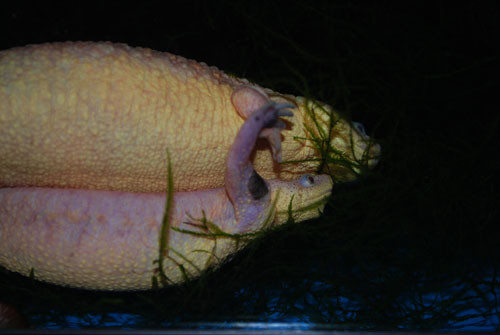 A pair of leucistic Spanish newts engaged in amplexus.

Within one week of successful mating, the female will start to deposit eggs. The eggs are usually attached to aquatic plants, live or artificial, in gelatinous strands, which contain about ten to 20 eggs each. Depending on the size and age of your female, 100 to 1,000 eggs could be deposited in a single spawning. I carefully remove the eggs, which are attached to live java moss, and place approximately 50 eggs in a 16-quart plastic sweater box that contains 2 inches of aged water. Eggs kept at a temperature of 68 to 72 degrees Fahrenheit will start to hatch in seven to ten days. Try to keep eggs below 74 degrees, as high temperatures could accelerate development and cause deformities. When the larvae hatch, they are very small (10 millimeters), limbless and resemble a whitish colored tadpole. You will notice that they will be motionless and laying on their sides while absorbing the remainder of their yolk. About three days after hatching, they will resemble a small gray tadpole with tiny feathery gills and will be ready for their first meal. 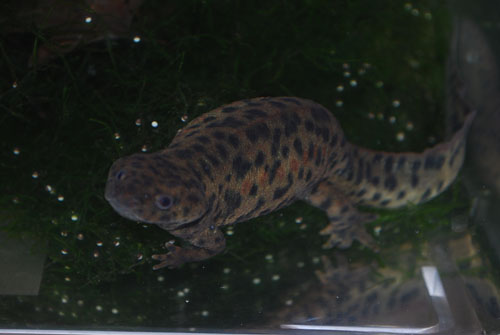 This female Spanish ribbed newt is laying eggs in some Java moss.

Although the larvae are small, they have very big appetites and will consume large quantities of live food. The first few days, offer them live microworms. Starter cultures can be purchased online. You should have a small culture started a few weeks prior to breeding your newts. Microworms are a good first meal because they can live in freshwater for more than 36 hours and larvae can feed continuously without any concern for water quality issues due to overfeeding. At four days old, start feeding live baby brine shrimp, which are rinsed in fresh water prior to feeding. Newly hatched brine shrimp are orange in color, which can be seen in the swollen stomachs of the larvae as they feed. Larvae grow rapidly and at 7 to 10 days old should be ready to consume small segments of chopped live blackworms. They are voracious feeders and will easily attack and consume food items one third their body size. Larvae will begin to grow front legs at about two weeks old and rear legs a week or so later. Their feathery gills will increase in size as they grow and they will resemble a small axolotl. Adding additional java moss and performing routine water changes as needed during the entire rearing phase is highly beneficial. 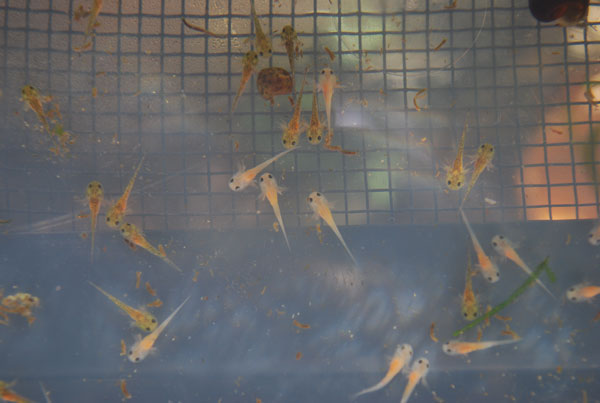 At approximately one month old you can attempt to offer small newt or aquaculture pelleted food, but continue to feed live blackworms until they readily accept the non-living food items. This is also the time you want to reduce the population of newts within the 16-quart plastic storage container to about 15 to 20 animals or transfer them to a larger container. Larvae will grow at different rates and should be separated according to size to avoid cannibalism. The more room and water volume you give them, the faster they will grow. Larvae will begin to lose their feathery gills and dorsal and ventral tail crests at about three months old. They will be approximately 3 inches at this stage and will eagerly consume pelleted food. Young newts should be housed at a stocking density of at least one per gallon. 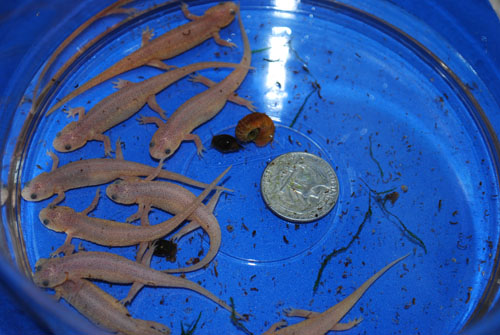 Healthy adult ribbed newts may continue to spawn every month or so after the initial conditioning phase. Carefully remove as many eggs as possible as these may foul the water, depending on the size of the spawn.