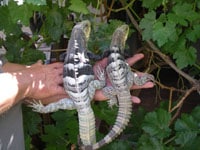 To condition your spiny-tailed iguanas to breed, they need to follow a natural daylight cycle. Starting September 1, begin decreasing their 12-hour light period by 15-minute increments every week. By December 1, their lights should be on nine hours a day. You can also skip turning on the lights for a day or two every so often, which will mimic a cold, cloudy day in nature. Your spiny-tailed iguanas may experience some weight loss during the decreased light cycle; if it is excessive, increase the light cycle immediately. 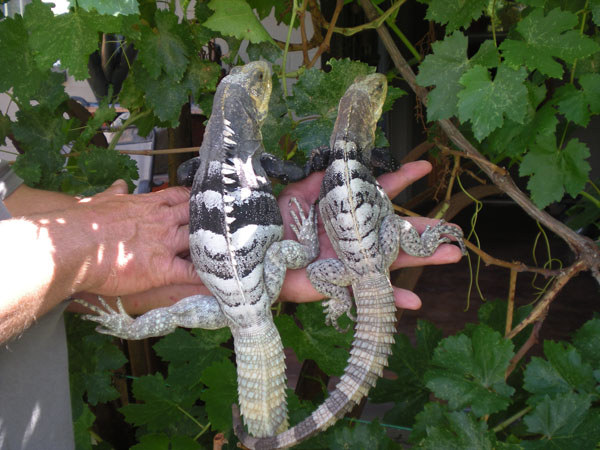 Continue the nine-hour light cycle until February 1, then begin increasing it by 20 minutes each week. By June 1 your animals should be exposed to 14 hours of light a day. May through August is the prime time for spiny-tailed iguana breeding and egg deposition. Males’ hemipenile bulges will be larger, as will their femoral pores that will be producing waxy excretions. Depending on the species, males may also begin dragging their hindquarters when walking. These are all clues that indicate breeding season has begun.

It is important to monitor your animals during breeding season. Males are usually larger and stronger than females, but either animal can be harmed during breeding. If you don’t keep a compatible pair of spiny-tailed iguanas together year round, during the breeding season you can introduce the male to the female’s enclosure or vice versa. Breeding usually begins with the male rapidly bobbing his head at the female. He will then approach her and usually begin flicking his tongue over her body. If the female is receptive she will lower her head and the male will grasp her by the neck. He will then hold her in position with a front and rear leg over her. His tail will begin to inch under hers, and at this point the female usually raises her tail and breeding will commence. They may remain in this position for up to 20 minutes. If the female is unreceptive she will run away, or she may push the male off using her tail.

Gravid females tend to bask more often. Gestation can take 45 to 70 days depending upon the species. Females of some species may exhibit a decreased appetite during the weeks leading up to laying eggs; others will continue to eat right up until they lay their eggs. Have a nest box ready and in the enclosure two to three weeks before the female is ready to lay eggs, so she has time to adjust to it being in her enclosure. The nest box length should be one to one and a half times the length of the female and 24 inches wide. The substrate inside, consisting of peat moss, coarse sand and slightly moistened top soil, should be 12 inches deep. Be sure it is well mixed so that the female can dig an egg deposition chamber without it caving in on her. When she is ready, she will dig a burrow in the nest box, turn around inside it and proceed to lay her eggs.

It can take several days for a female spiny-tailed iguana to finish laying her eggs. When she’s done, she will back-fill the nest. Immediately after laying, female spiny-tails will appear thin and exhausted. They should be soaked and will usually drink at this time. Within one to three days they should be eating normally again.

Clutch size varies with species, size and age of the female. Smaller Ctenosaura and younger animals lay approximately four to 10 eggs. Large, mature female Mexican (C. pectinata) and black (C. similis) spiny-tailed iguanas may lay 40 to 55 eggs. The eggs of most species are about the size of bearded dragon eggs.

I incubate all my Ctenosaura eggs at 86 to 88 degrees Fahrenheit with about 70 percent humidity. I have used perlite, vermiculite and sand as incubation mediums, though recommend vermiculite. Mix it with enough water so that if you squeeze it with your hand as hard as you can, only a few drops of water will fall out. I live in Phoenix, where it is hot and dry, and I check the moisture content of the incubation medium about every 15 days. If it is too dry the eggs will collapse, and if it’s too wet mold and fungal growth will develop. Following these guidelines, eggs should hatch after 65 to 80 days.

Kelly Paul is a hobbyist with a lifelong interest in reptiles. He has bred more than two dozen species, including six Ctenosaura. He has been a guest speaker at several events, including the International Herpetological Symposium. Email him at blueghostreptile@msn.com.