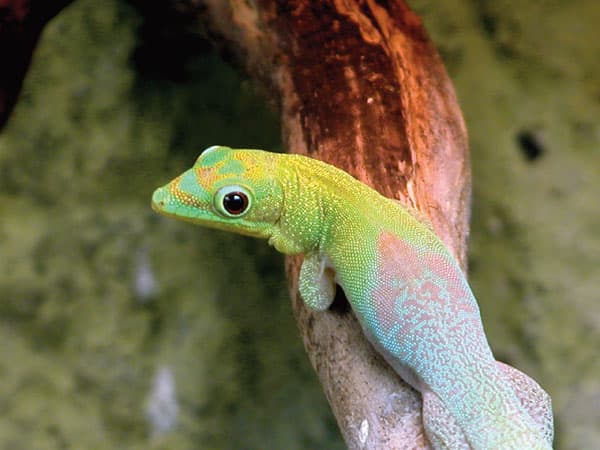 The gold-dust day gecko has always been treasured in my gecko collection. This is not only because of dazzling gold speckles along its neck, red back markings and blue streaks above its eyes, but also its curious personality, which makes these lizards very visible terrarium geckos.

Other Phelsuma Worth Knowing

However, back markings and size differ between the subspecies. Phelsuma l. laticauda has three elongated red teardrops along its back, and P. l. angularis has pinker chevron- or arrow-shaped markings pointing toward the head. Reaching an adult snout-to-vent length of more than 5 inches, P. l. laticauda is the larger subspecies. A mature P. l. angularis might grow to a little more than 4 inches in snout-to-vent length. 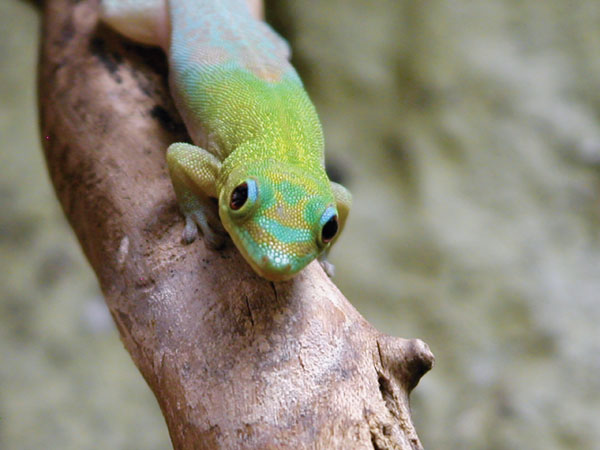 Recognizing the differences between the two subspecies is important because attempts to interbreed them can lead to problems. For example, their temperaments are different, and the larger subspecies can and does kill the smaller subspecies.

Husbandry for both is nearly identical. Phelsuma l. laticauda is hardier due to its size, but it does tend to be a bit more aggressive. Phelsuma l. angularis favors a smaller enclosure with more plants in which to hide.

Cooling a pair of geckos or cycling into winter conditions is beneficial, especially for females. Cooling usually stops breeding and gives geckos time to recover from the stress and nutritional demands of breeding as well as to rebuild physical reserves so next season’s offspring are stronger. 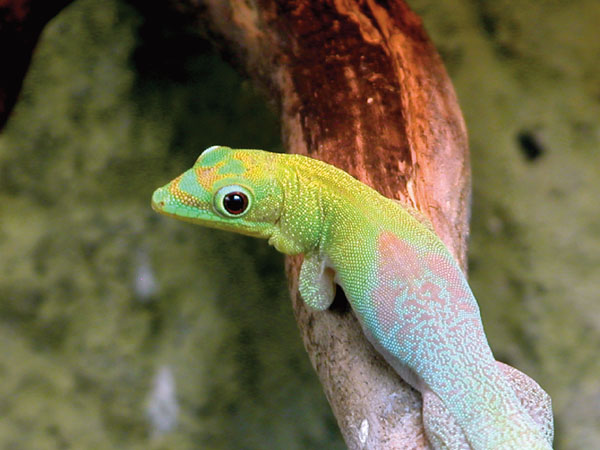 On its back, Phelsuma laticauda angularis has pinkish, arrow-shaped markings that point toward the head..

Many keepers cool their geckos from October through January and then warm up the lizards starting in February. I recommend gradual changes in temperature and photoperiod reflecting a more natural season change.

Start with a mature male and female of the same subspecies. Gold-dust day geckos sexually mature at about 9 months, but wait until they are at least 12 to 14 months old before breeding; otherwise, it could have a poor effect on their health.

If recently purchased, recently shipped or both, give them time to adjust to their new environment. During acclimation, check each gecko for parasites and injuries. Only when both are completely settled, healthy, well fed and on a steady diet, should they be put together. 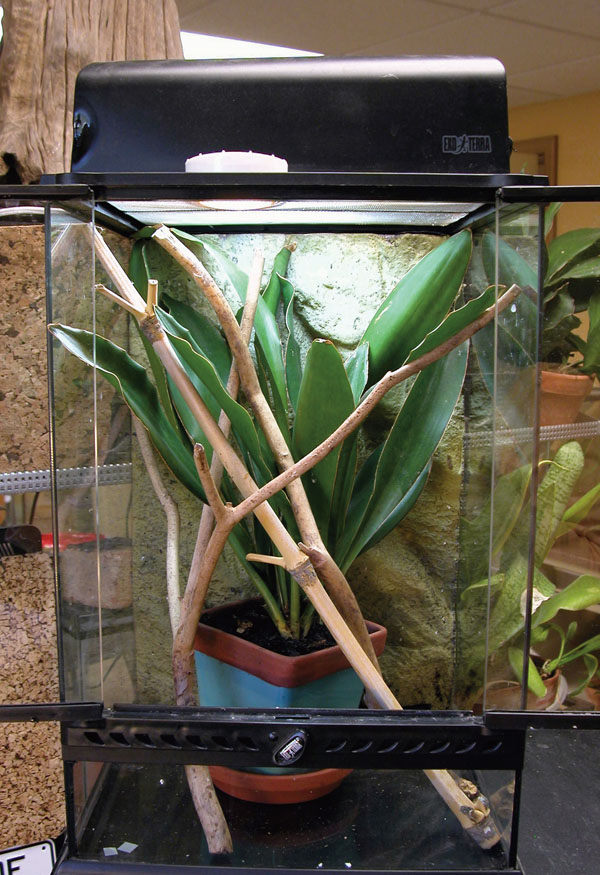 Plants within a gecko’s enclosure help maintain the 60 percent humidity required for this species.

The pair needs a breeding vivarium at least 8 to 10 gallons in size. It also should be taller than it is wide. In other words, the breeding vivarium should be suitable for arboreal geckos. The ideal substrate to use is a mix of organic soil and orchid bark.

Both subspecies require temperatures ranging from 75 to 89 degrees Fahrenheit and 60 percent humidity. Optimal lighting provides high-illumination, superior color rendering, supplemental heat and, for many keepers, UVB light. I prefer daylight-rated compact fluorescent lights and halogen basking lights. UVB lights rated for tropical reptiles are suitable if a keeper prefers to maintain Phelsuma using that method. My preference has always been to provide more calcium and vitamin D3 rather than ultraviolet lighting.

Detailed information about how to set up and test a vivarium can be found in species-specific manuals, such as Day Geckos in Captivity by me and my husband. The wrong setup can cause stress and interfere with breeding.

Introduce the pair into the habitat one right after the other. Neither gecko should have occupied the vivarium before the introduction. A clean enclosure is neutral territory, reducing territorial disputes and promoting harmony between the two.

Watch for signs of acceptance. Good signs include head wagging or bobbing, a male showing its back to the female, and a female allowing the male to bite her neck as he mates with her.

Chasing, refusals and attacks are signs of aggression. All Phelsuma species are territorial, and not all pairs get along. Even if they initially seem compatible, one or both can beat, maul and inflict mortal wounds on the other. Separate hostile geckos before their behavior goes too far.

The female in a pair of gold-dust day geckos is capable of laying a clutch of eggs every three to six weeks during the breeding season as long as dietary needs and environmental conditions are met.

To maintain a successful reproductive rate and healthy offspring, do not underestimate the importance of nutrition, especially with gravid females. Many hatchlings fail to live beyond a few days because they lack vital nutrition in the egg.

Gut-loaded crickets along with alternating feedings with fruit purée are the preferred foods for day geckos. Research gecko nutrition, gut loading and supplementation. A strong nutritional program is essential for breeding success.

Gold-dust day geckos are prolific breeders, so if females lay few eggs or they lay them infrequently, then husbandry needs are lacking, or a gecko is sick, immature or past its prime breeding age.

Within weeks of successful breeding, eggs can be seen through the female’s white belly. As she approaches full-term, which can range from three to four weeks depending on the environment and diet, she seeks a suitable egg-laying site. These geckos typically lay eggs within plant leaves, such as sansevieria, or in bamboo. Females are secretive and should not be disturbed while laying eggs. Healthy females usually lay a double clutch (two eggs glued together) and sometimes a single egg. The eggs do not stick to surfaces.

Eggs can be incubated where they are laid, but adults may eat hatchlings, so egg removal is best. It’s important to maintain the eggs’ original orientation when they are moved.

Set up and test incubators before placing eggs inside. Trust only quality hygrometers and temperature gauges for accurate readings. For the greatest accuracy, run tests during a five- to seven-day period, and record levels at different times of the day.

All Phelsuma species exhibit temperature-dependent sex determination. For gold-dust day geckos, according to my records, temperatures of 83 degrees and higher produce a greater number of males; 80 degrees and lower produce more females; and 81 to 82 degrees might produce a mix of both male and female offspring. Incubators can be set to produce a specific offspring sex, but success requires controlling and monitoring correct temperature and humidity levels. Not all incubators hold steady temperatures.

A small container with a lid, such as a plastic deli cup or a Rubbermaid container, holds the eggs. This container should be able to maintain humidity and airflow, and it should be able to prevent hatchlings from escaping. I put an average of 10 holes, each the diameter of a pencil, in the container for air circulation, but the number of holes depends on the size of the container. For substrate use moist — not saturated — vermiculite, perlite or sphagnum moss. Measure humidity with a hygrometer; levels should be around 60 percent.

Place eggs on the substrate of the small container. Eggs should not be able to roll. Add a lid, and label it with identification numbers to track the species, parents, oviposition and projected hatch dates. Then place the small container into the incubator.

Gold-dust day gecko eggs incubated at 82 degrees and 60 percent humidity hatch within 40 to 45 days. Temperature changes affect the number of days it takes eggs to hatch. Higher temperatures develop eggs faster, and lower temperatures slow egg development. If good records are kept, the keeper can be on watch as the expected hatch day approaches. Mornings seem to be the preferred hatching time, and sometimes eggs hatch within a day of each other.

Knowing the projected hatch date gives a keeper time to set up hatchling enclosures and obtain small food items. Newly hatched gold-dust day geckos can be housed in smaller enclosures than adults. I prefer to use medium Kritter Keepers. Initially a pair of hatchlings can be housed together, but they need to be separated within the first month before aggression issues cause problems.

Hatchlings eat pinhead crickets, fruit flies and fruit purée. Their nutritional needs are critical, so great attention should be given to gut-loading feeder insects, providing fruit purée, and supplementing foods with vitamins and minerals. Feed hatchlings daily for the first three months. Without a superior diet, hatchlings will fail to thrive.

Hatchling survival beyond the first few weeks depends on attention to their nutrition as well as their environment. Although an adult tolerates some variance in environment, hatchlings will not.

Maybe with just a little luck, keepers who follow these guidelines, along with advice printed in other reference materials or given by experienced keepers, will strike gold and successfully breed the gold-dust day gecko.

Leann Christenson is the co-author of the book Day Geckos in Captivity (Living Art Publishing, 2003) with her husband, Greg. They have bred geckos for more than 16 years.