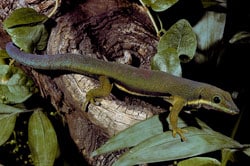 Will breeding a gold dust with lined day gecko work?

Q: I have a pair of gold dust day geckos (Phelsuma laticauda) that just laid three eggs. Once the eggs hatch and the geckos mature sexually, I would like to try breeding one of them with a lined day gecko (Phelsuma lineata) that I also have. Will this work? If it does, will the coloration favor one of the parents or be a mixture of the two?

A:Why would you want to create hybrids when you already have two beautiful species of lizards? Hybridization is never recommended (at least by me) between any two reptile or amphibian species. Hybrids produced in a herp room may survive, but they seldom are as beautiful as their parents, are often maladapted, seldom reproduce easily or at all, and have a tendency to creep into commerce and infect pure breeding lines of their parent species. Stick with the originals! It took nature at least tens of thousands of years to produce gold dust and lined day geckos, animals adapted to their own habitats and with specific breeding behaviors; why tamper with a perfectly good system? 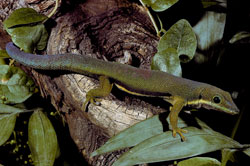 A lined day gecko (Top) and a gold dust day gecko (Bottom) potentially could breed, but such a pairing should be discouraged.

The appearance of hybrids is unpredictable. Natural lizard hybrids are generally somewhat intermediate between the parents, though often one parent dominates the pattern.

Though these geckos are similar in size and general biology, including incubation periods, the distinctive colorations of these two species should be enough to prevent mismating. 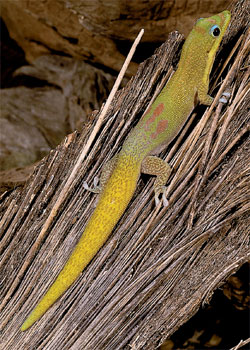 Hybrid offspring are often maladapted, can have reproductive problems and tend to taint pure breeding lines.

Day geckos can see color, and females recognize males of their own species compared to other similar but somewhat differently colored males. (Remember, mating is a two-way street, and females must be receptive to successfully mate.) Gold dust geckos lack strong dark lines on the sides, and have red "fingerprints" on the back and bright yellow throats; lined day geckos have dark lateral stripes, pale throats and relatively subdued colors on the back. I suspect a female gold-dust would just not be interested in a male lined and vice versa.

Matings can be forced, but I suspect that few resulting eggs would be viable. Gold dust day geckos have nonadhesive eggs, while lined day geckos are noted to have slightly adhesive eggs and prefer laying in crevices. There is a strong likelihood (speculative, of course) that the genes controlling shell development may not be compatible between the two species. I have no information on the chromosome structure of these species but would suspect that there are significant differences, perhaps enough to prevent successful fertilization.

Even if young were to develop, hatch and feed, it is likely that these species are distinctive enough genetically that the young would be sterile or at least exhibit reduced viability, as with most hybrids.

Nature tends to fight against hybridization in most groups of animals, and lizards with such distinctive color patterns certainly are not exceptions. Don’t do it!