I’m trying to breed my green anoles, and I want to know how I should go about doing this.

Q. I’m trying to breed my green anole lizards, and I want to know how I should go about doing this. I have one male and three female green anoles in a 20-gallon-long tank, and I am thinking of getting more. Please give me some advice about how I should encourage them to breed.

A. Relatively few keepers succeed in breeding green anoles (Anolis carolinensis) into a second generation. Green anoles aren’t hard to mate, and females lay fertile eggs, but the babies can be very difficult to keep alive until old enough to take care of themselves. 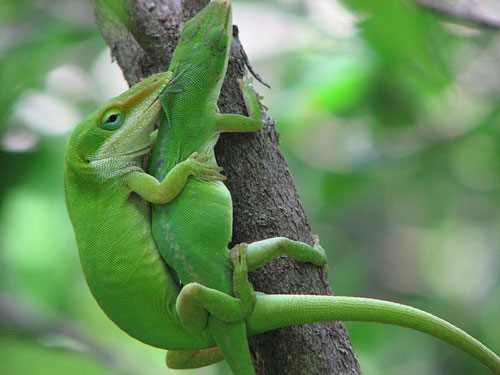 First, though, make sure you can legally keep native green anoles in your state. For example, Georgia has quite restrictive legislation dealing with native reptiles, and you might be surprised to learn what you are not allowed to keep in the terrarium. Check with the Georgia Department of Natural Resources for details. You probably will need a permit to keep green anoles legally.

OK, so now your green anoles are legal, and you want to breed them. First, change your cage. A 20-gallon-long tank will house several anoles, but it really won’t give the male the proper sites to set up a territory. You want a taller terrarium — one double the height of the 20 gallon long. Only a single male green anole lizard can be kept in the terrarium, which should have living or artificial plants and perches in abundance.

The plants serve two purposes: they allow the green anoles to establish a distinct territory with boundaries, and they serve as a base on which clean water should be sprayed at least twice a day. Green anole lizards seldom drink from a water dish, but they often lick water droplets from leaves. This becomes very important when trying to keep the babies alive. Fairly warm (80 degrees Fahrenheit) temperatures, humid but airy conditions, and good lighting for at least 12 hours a day will help your anoles stay healthy.

Finding a perch high in the terrarium to serve as the center of his territory, one male green anole lizard can easily control a harem of four or five females. His mating display — bobbing his head up and down and displaying his bright pink dewlap — actually induces ovulation in mature females, including those still carrying sperm from the previous year.

Mature female green anoles that enter the male’s territory will be chased, caught with a strong bite to the nape of the neck and then maneuvered for breeding. After mating, the female is released and may not be bred again. One mating is sufficient for a female to produce eggs all summer while still holding some sperm into the next breeding season. However, before each egg is laid, the female has to be courted. She has to see a male bobbing his head and displaying the pink dewlap.

A mated female green anole lizard soon starts developing small, round, white eggs with thick shells.  Each ovary produces a single egg in turn. The eggs are usually placed one at a time in a shallow scrape nest in dirt or debris at the base of a plant, so be sure a suitable nesting site is available.

Each mated female green anole lizard produces one egg roughly every 10 days during the laying season, which runs through the summer and into early autumn. You can expect a dozen eggs total from each female. Keep an eye out for newly laid eggs, and try removing some for incubation while leaving others for natural development.

Green anole lizard eggs hatch in four to six weeks when incubated at 80 to 85 degrees with about 80 percent humidity. The babies are tiny versions of their parents, though they usually are brownish in color and have relatively large heads and short tails.

Baby green anoles allowed to hatch in the terrarium need access to tiny food insects, such as baby crickets, springtails or flightless fruit flies. They also must have water in the form of tiny droplets at the tips of leaves and other decorations. Babies dehydrate quickly if the terrarium conditions are not perfect. They also face a good chance of being killed by other babies, which fight when meeting each other, or even being eaten by the adults. Some probably will survive because they grow quickly.

If you produce baby green anoles from an incubator, they should be housed separately (to prevent fighting) in a tiny terrarium easy to keep humid and warm. Try exposing the container to indirect sunlight for at least three or four hours a day, and be sure water droplets are on leaves or on the sides of the container.

Often baby green anoles kept in small terraria do not drink — even from droplets. In such cases, first very carefully catch the baby. Then using an eyedropper, place a single drop of water at the tip of its snout, so it can lick the water off. This must be repeated several times a day until the baby starts drinking on its own. Most captive-bred baby green anoles die of dehydration, but several of any large group are almost sure to survive and mature in just a few months.