Cinnamon frogs (Nyctixalus pictus) are a fairly simple frog to keep and breed. If the terrarium is properly setup, there is nothing to the process – the frogs just breed sporadically year-round. As with many tropical amphibians, there is no real breeding season, rather when the adults are in good condition, and both sexes are present, there is the opportunity for breeding. As covered in the March 2012 REPTILES magazine article, cinnamon frogs like a semi-aquatic home, which is kept at a very high humidity and at temperatures between 75 and 82 degrees Fahrenheit during the day and a drop at night into the low 70s or even the 60s. 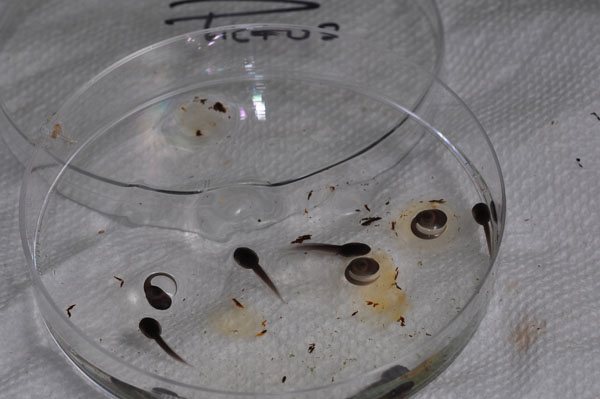 This clutch of cinnamon frog tadpoles is just beginning to hatch. Over the next 24 hours, the remaining tadpoles will erupt from their gel.

Obviously, one of the first things one wants to know when acquiring them is how to tell the difference between males and females. Unfortunately, recognizing the difference between male and female cinnamon frogs is not easy. Both are fairly similar in size, with the females becoming slightly longer and wider as full adults. Sexing subadults or juveniles is basically impossible. As with most frogs, the best strategy is to purchase several juveniles and hope for opposite sexes. As your juveniles grow, the males will begin to call, usually at a much earlier age than breeding would begin to occur. We have noticed young males calling as early as four months out of the water, but breeding is probably not going to occur until the frogs are more than 8 months old. One technique that may speed up the process of determining the sex is to watch the tank and catch a frog calling. Remove the calling frog to a second, temporary tank. Continue the process, and any frogs that are left in the terrarium that do not call are likely to be females. 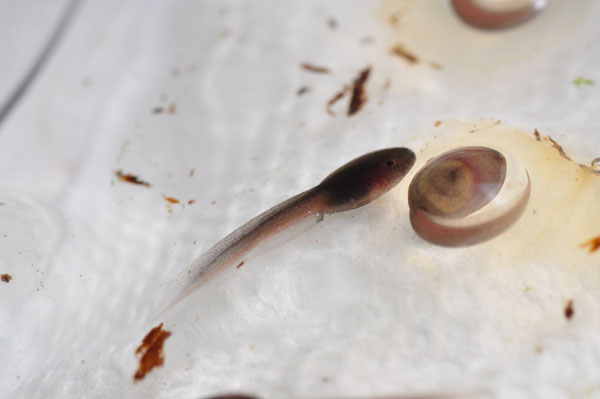 A freshly hatched tadpole, along with the clutchmate that has not hatched. Note the coiled intestines visible through the belly wall!

While there does not seem to be a breeding season for these frogs, you can encourage them to breed by misting the tank daily with a hand or pump sprayer. Probably, the best time for this will be late in the day, just before or after the lights go out. Rain chambers or misting for several hours could be used as well, but in my experience, this is unnecessary and hard on the frogs. Egg deposition takes place at night, and it follows a period of amplexus between the male and female. Eggs are attached to a piece of wood, preferably, but occasionally we have found eggs attached to something else in the tank. The ideal breeding site for them is a branch or other piece of wood that is smooth and starting to breakdown a little, so that the surface is somewhat soft. Place the wood in the tank water in such a way that it comes out of the water at an angle and rests against a side wall. The eggs will be attached to the branch, just above the water line. Clutch size ranges between three to around 10. Eggs are sticky spheres, which are usually connected to the other eggs in the clutch by a gel layer, but this gel layer is not important to the eggs. We remove the eggs with forceps, but you could use a spoon or even a stiff piece of plastic like a credit card. Place the removed eggs in a Petri dish or similar smooth surface, and wet the eggs with enough water to surround but not cover them. Put a lid on the container the eggs are in to keep them from drying out. 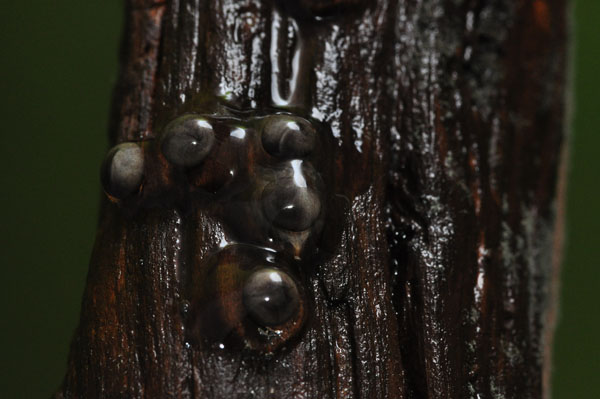 A clutch of freshly laid cinnamon frog eggs. This is the typical egg deposition site for the author’s frogs. Note the way the limb is softened by having been kept wet for many weeks.

About two weeks after the eggs are laid, tadpoles will begin to hatch. You can assist with this, but it is not necessary. Within a day or two, the tadpoles will all be out of the eggs. During this time, clean any excess gel from the Petri dish, and replace some of the water with fresh, dechlorinated water. Tadpoles are fairly inactive at first, and they can be left like this in the Petri dish for two to four days.

At my facility, we raise the tadpoles in plastic storage boxes, primarily the ones referred to as sweater boxes, which are about 16 inches long, 12 inches wide and 8 inches tall. Add about three-fourths of an inch of water to the box, and put the tadpoles inside. Make sure the water temp is close to the temp of the tadpoles, so you avoid shocking them. Water temps for raising the tadpoles, as well as "incubating" the eggs should be in the mid-70 degrees. A few degrees either way won't hurt anything for a few hours, but try to keep them between 70 and 80 degrees most of the time. Keeping the lid on the container will be critical to maintaining the temperature.

A few oak dried oak leaves in the water will help provide the tads with hide spots, and the tannins released by the leaves act as an anti-bacterial agent.

For food, we use powdered spirulina algae, mixed evenly with powdered chlorella algae. These algae are a great food for most tadpoles. The powder is sprinkled on the water and then sprayed with water to make it sink. The algae will settle on the bottom and be eaten there by the tadpoles. Every three or four days observe the water and the level of algae on the bottom of the container. Add more if it appears to be getting low. Water should be a light green after the algae is added. In the early stages of tadpole development, as the tads are growing, just add a bit of water each time you feed, so perhaps another half inch of water added at each feeding. At around three weeks, you can begin removing some of the water at each feeding, and then replacing it. At this point, you would have about 3 inches of water or so in the container. If you continue to remove a couple of quarts and replace it each feeding, this should be plenty of water and food for the tadpoles.

Metamorphoses into full frogs takes around 50 days, but can vary considerably depending on your temperatures and the individual tadpoles. While it is safe to raise them together, doing so does seem to result in the tadpoles metamorphosing over a couple of weeks. Take the newly emerged frogs and place them in communal setups with their clutchmates. These setups can be larger plastic storage tubs, say around 5 gallons, with a couple of branches and floating corkbark to pull out on. The floor of the tubs would be covered with a couple of inches of water. Begin offering one-fourth-inch, or slightly smaller, crickets in the floating food stations described in the REPTILES magazine article.

Patrick Nabors has been breeding frogs and reptiles since the early nineties. You can find more about his frogs and care information at Saurian.net.