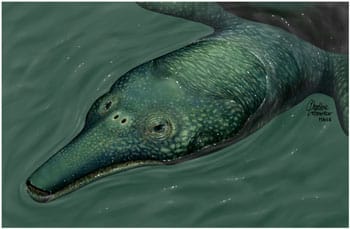 Fossil Ocepechelon bouyai, discovered in Morocco is from one of the largest marine turtles to have swam the Earth's oceans.

Scientists have discovered a giant turtle fossil from the late Cretaceous period that possessed a mouth that used suction to eat food. The turtle, Ocepechelon bouyai, is named after the mining company that mines for phosphate deposits in Morocco, where the fossil was discovered, and the Greek name for turtle, and Baadi Bouya, an engineer and geologist who heads the OCP Geological Survey in Khouribga, Morocco.

A complete 28-inch skull was found, which detailed the turtle's unique bony pipette-like snout. The scientists who discovered it liken the chelonian's snout to that of beaked whales. Ocepechelon bouyai is also similar to beaked whales in that it possesses an elongated jaw and a small mouth gape, about 6 cm in diameter. The scientists pointed out in their paper that it is interesting to note the small diameter of the mouth gape to that of the large size of the skull, 70 cm long. This infers that Ocepechelon bouyai was a small prey hunter that may have fed on small fishes, cephalapods and jellyfishes.