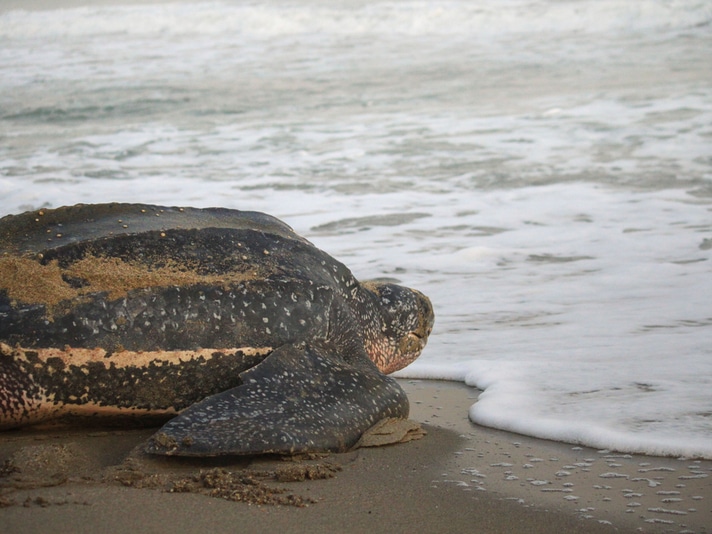 It is hoped that GPS data will be used by fisheries to avoid leatherback turtle bycatch.

Leatherback turtles (Dermochelys coriacea) get captured in commercial fishing longlines, both by biting the baited hooks and by the line itself, and scientists are proposing that fisheries be closed when the big turtles are present in fishing areas, according to a research paper published in the journal Proceedings of the Royal Society B. Scientists who authored the study placed GPS tracking devices on 135 adult turtles and determined where they swam in the Pacific Ocean and lined their movements up with that of commercial fisheries to predict the points in which the turtles and the fishers would coincide.

They then took this data to push for closing the areas for the times in which the turtles are moving through to fishing would help to alleviate bycatch of the turtles by the commercial fishing industry, enhancing their chance of survival as a species. The scientists say that the task of adjusting longline fishing times would be difficult without the data, yet claim that the fishers can easily coexist with minimal leatherback bycatch if they looked at the data. The leatherback turtles are creatures of habit that follow the same paths every year and revisit the same nesting beaches. Knowing this, the fishing industry can adjust their management practices accordingly, avoiding those times when the turtles are moving through the area.

"Now that we've scientifically homed in on where and when protections are needed, especially in the South Pacific Ocean the solutions to the turtle fishery problem will take international cooperation and innovative uses of technology to manage this wild west where regulations are few and enforcement is nil," said James Spotila, PhD, the Betz Chair Professor of Environmental Science in the College of Arts and Sciences at Drexel. Spotila is one of the authors of the study Predicting bycatch hotspots for endangered leatherback turtles on longlines in the Pacific Ocean.

The greatest risk to leatherback turtles with regard to longlines occurs in the western Pacific adjacent to Papua New Guinea, Irian Jaya, the Solomon Islands and other Indo-Pacific Islands. In the South Pacific, the South Pacific Gyre is the area of greatest risk for the turtle. This current system runs from Australia, to the Antarctic Circumpolar Current to the south, and South America to the east. There is no effective management for the area due to is broad open ocean and the fact that it is in international waters. These turtles are the largest turtle species and can grow to more than 7 feet in total length and weigh more than 1,500 pounds. It is listed as a vulnerable species by the IUCN.