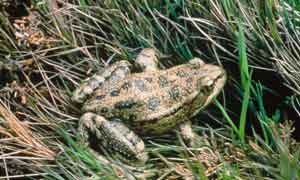 The California red-legged frog (Rana draytonii), which hasn't been seen in Southern California's Santa Monica Mountains in nearly 40 years may get a boost in numbers thanks to an isolated population of frogs living in streams in the nearby Simi Hills. That population, according to wildlife biologists is healthy and is successfully reproducing in the few hundred yards of stream that they live in. Plans have been made to transfer some of the egg masses of the Simi Hills population to a pair of streams in the Santa Monica Mountains. 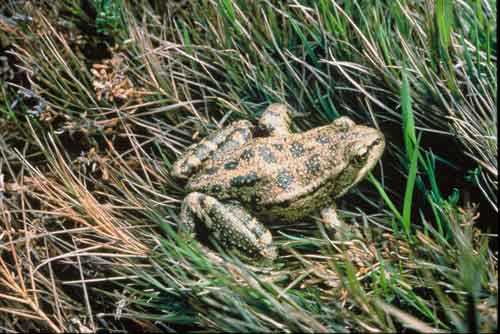 The California red-legged frog is a federally protected species. Biologists hope to reintroduce the amphibian into California's Santa Monica Mountains.

“California red-legged frogs haven’t been spotted in the Santa Monica Mountains since the early 1970s,” Katy Delaney, wildlife biologist for Santa Monica Mountains National Recreation Area, a unit of the National Park Service told the Simi Valley Acorn. “Our plan to bring them back here depends on the strength of this relatively tiny and isolated population in the Simi Hills,” said Delaney.

Biologists conducted night surveys of the Simi Hills population and ran the numbers through a program that creates population estimation models and calculated that approximately 100 adult frogs reside in a small portion of the Simi Hills Upper Las Virgenes Canyon Open Space Preserve. They then surveyed the area in which they wish to deposit the amphibian's egg masses for their best chance of survival, discounting streams that have invasive crayfish populations as well as other species that would feast on the egg masses and the tadpoles.

In Spring 2014, the team that is planning to reintroduce the frogs into the Santa Monica Mountains (California State Parks, the National Park Service, Santa Monica Bay Restoration Commission, U.S. Fish and Wildlife Service and USGS Western Ecological Research Center), will start the transfer of hundreds of eggs to streams in Ramirez and Solstice canyons. The eggs will be housed in mesh containers suspended above water to discourage predation. The frog, a federally listed threatened species was previously found in 46 California counties. It has since disappeared from 24 of those counties.

Loading...
Newer Post
Scientists Turn To GPS To Map Out Hotspots For Leatherback Turtles In The Pacific
Older Post
Island Born Lizards Are Less Prone To Fleeing Than Those Found On Mainlands
Advertisement