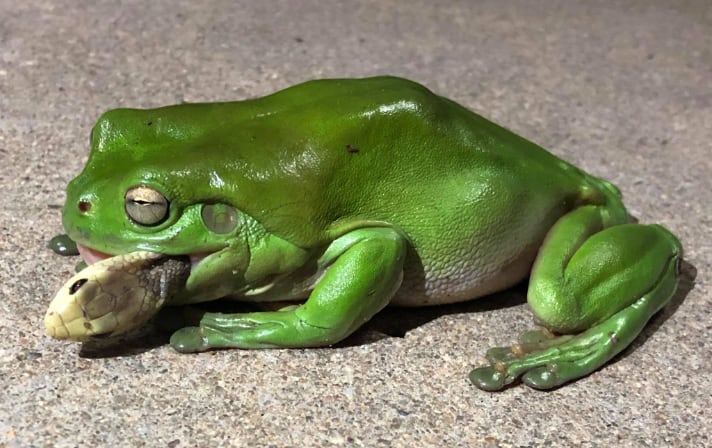 The green treefrog, despite being bitten by the coastal taipan snake, is apparently healthy and will be released February 7.

When Queensland, Australia snake catcher Jamie Chapel was called out to a home to remove a coastal taipan snake, he got what could be called the experience of a lifetime. Well at least for non-snake removal folks. Chapel was on his way to the home when the woman called back and said a frog was eating the snake. When he arrived ,the frog, a green treefrog (Litoria caerulea) was almost done devouring the snake.

Posted by Townsville – Snake Take Away and Chapel Pest Control on Tuesday, February 4, 2020

"By the time I got there the frog had been bitten quite a few times but had almost swallowed it completely, Chapel told Daily Mail Australia. "I wasn't sure if the frog was going to survive, but I didn't want it to regurgitate the snake alive and for it to slither back into the woman's yard, so I took it back with me."

Chapel has been updating the frog's condition on the Townsville-Snake Take Away and Chapel Pest Control Facebook page, and so far the frog, now named Fatty, is doing well in spite of it being bitten by the snake. The latest update on February 5 says that the frog is still alive and was active. Chapel will give it another day of rest before he releases it back into the wild. 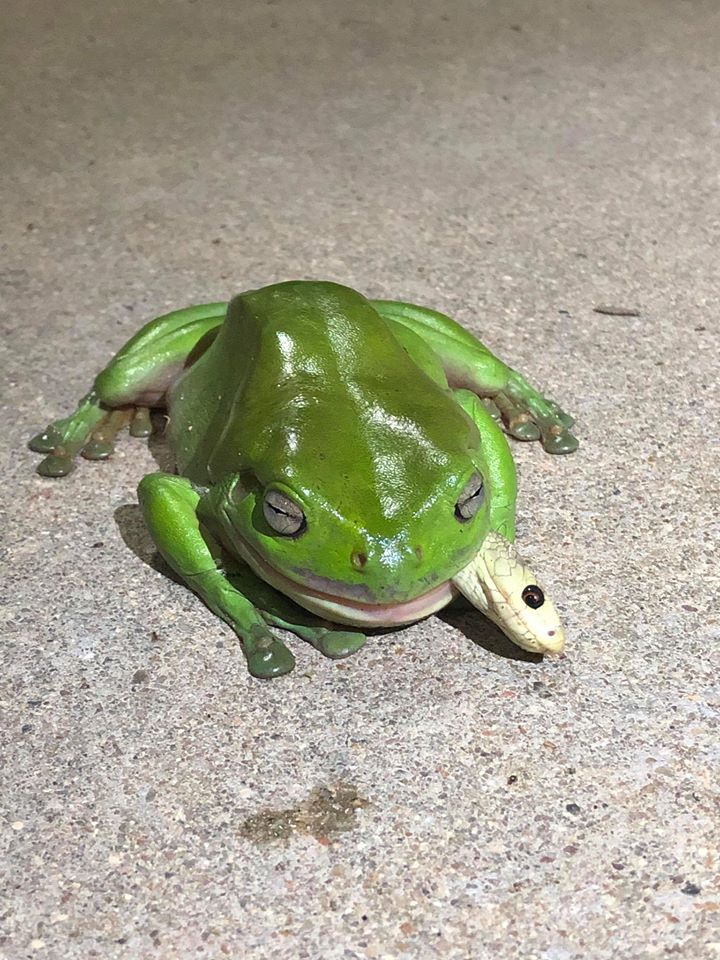 This green treefrog, also called a White's treefrog and Dumpy frog, made a quick meal of this highly venomous coastal taipan snake.

The green treefrog, also known as the White's treefrog or the dumpy frog, is native to northern and eastern Australia and New Guinea. They are fairly large frogs and are known to eat almost anything that they can fit in their mouths. They are very popular amphibians and are widely captive-bred. The coastal taipan snake (Oxyuranus scutellatus) can be found on Queensland's coast and and in New Guinea. It is considering the third most venomous terrestrial snake, after the inland taipan (Oxyuranus microlepidotus), and the eastern brown snake (Pseudonaja textilis). It is the longest venomous snake in Australia, measuring between 1.5 and 2 meters in length.