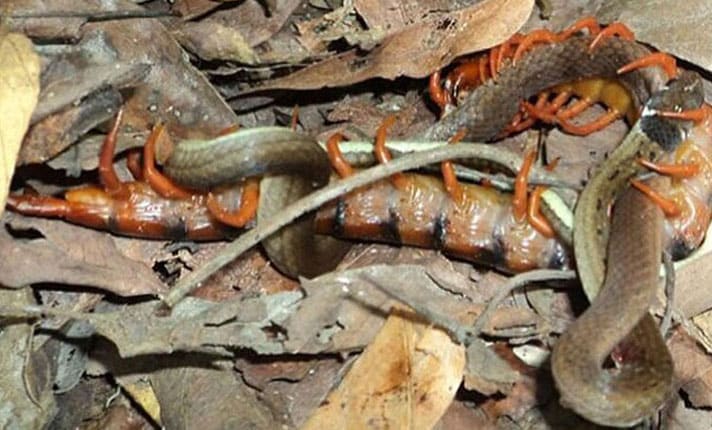 Centipede Devours Snake In Midst Of Laying Its Eggs

For some reason, many people have a fear of snakes. But centipedes? People seem not to care trio much about centipedes, even though they have a powerful bite and they are known to subdue their prey with relative ease. Scientists studying the badass invertebrate came across a giant centipede feeding on a snake that was in the process of laying eggs. Now how is that for the ultimate in predation? 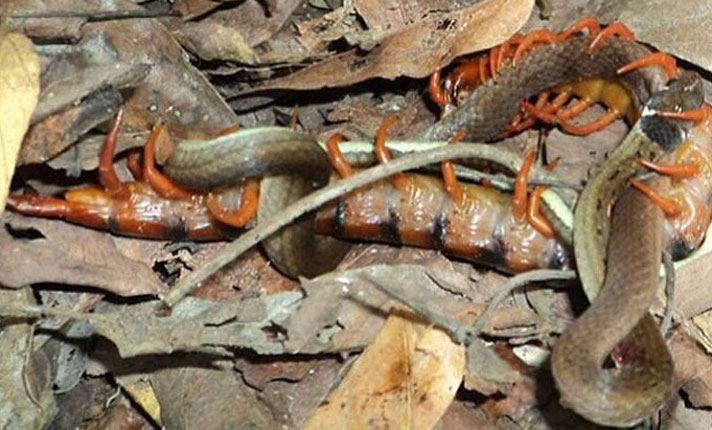 Scolopendra dawydoffi in the midst of attacking and devouring a triangled black-headed snake (Sibynophis triangularis).

The scientists were in Thailand studying centipedes of the Scolopendrid group when they came across a Scolopendra dawydoffi in the midst of attacking and devouring a  triangled black-headed snake (Sibynophis triangularis). The snake had just deposited three eggs when it was attacked.

In their paper, published in the Journal of Insect Behaviour, they note their observation was the first case in which a centipede was attacking and eating a vertebrate that was in the middle of laying eggs.

Centipede Eats Juvenile Nose-Horned Viper From Inside Out

"The centipede was found already wrapped along the whole body of the snake, which was caught during oviposition, with three eggs already having been laid, and another two seemingly still inside its body," the researchers wrote in their paper “Centipede, Scolopendra dawydoffi (Chilopoda: Scolopendridae), predation on an egg-laying snake, Sibynophis triangularis (Squamata: Colubridae), in Thailand.

Centipedes are definitely invertebrates to be reckoned with. One species, having been eaten by a juvenile nose-horned viper, ate its way out of the stomach of the snake before succumbing, presumably due to the reptile’s digestive juices. You can read all about that encounter here.