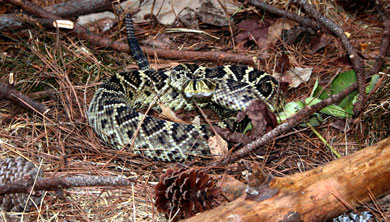 Florida man had just helped a turtle cross Interstate 75 in Florida when he was bitten.

Punishment for a good deed? Apparently so as a 24-year-old man who helped a stranded turtle across Interstate 75 in Florida was bitten by an eight-inch Eastern diamondback rattlesnake right after he placed the turtle in some grass on the other side of the road. Immediately after the bite, the man was driven by a friend to a local hospital where he was treated by the intensive care unit of the hospital as well as Miami-Dade Fire Rescue's venom response unit. The venom response unit can administer up to 48 different antivenins to treat bites from scorpions, spiders and snakes, including coral snakes and cobras.

They were very smart in going to the hospital,” Michelle Fayed, spokeswoman for Miami-Dade Fire Rescue told the SUn Sentinel. The venom apparently affected the man's left arm. This was the second rattlesnake bite in the county in two weeks. A ranger was bitten at Everglades National Park as he was trying to remove a five and a half-foot rattlesnake that was found in a fellow ranger's storage closet. According to the paper, he was grasped the snake behind the head and was preparing to drop it in a bag when the snake twisted around and bit the ranger on the index finger. He airlifted to a hospital for treatment.

The eastern diamondback rattlesnake's (Crotalus adamanteus) range includes southeastern North Carolina south to the state of Florida, including the Florida Keys to eastern Louisiana. It has been eradicated from most of its native range due in part to events such as rattlesnake roundups, where rattlesnakes of all types are taken from the wild.