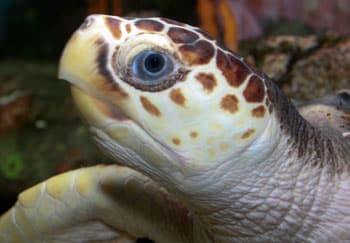 NMFS proposes waters off of six eastern states be designated as critical habitat for Caretta caretta.

The National Marine Fisheries Service has submitted a proposal to protect the habitat of the loggerhead sea turtle (Caretta caretta), across six states covering 36 areas of ocean in which the reptiles frequent. The proposal came as a response to a 2012 lawsuit filed by three conservation groups (Oceana, Seaturtle.org, and the Center for Biological Diversity) claiming the agency did not designate critical habitat for the reptile, which was placed on the Endangered Species List in 1978.

The NMFS is proposing that waters off the coasts of North Carolina, South Carolina, Georgia, Florida, Alabama and Mississippi be designated as critical habitat for the turtles. In March 2013, more than 84 percent of the loggerhead sea turtle nesting areas in the United States were proposed for protection. This covered 739 square miles of nesting beaches along the Atlantic and Gulf coasts.

The groups that filed the lawsuit said that while the agency's current proposal is a start, the proposal doesn't cover the waters off Massachusetts, which the loggerheads are known to frequent, nor does it cover areas on the east and west coasts as well as the Gulf of Mexico where the turtles are known to feed. The protected habitat areas designated by the NMFS must be finalized by July 1, 2014, according to the agreement that the NMFS hammered out with Oceana, Seaturtle.org, and the Center for Biological Diversity.

The loggerhead sea turtle faces a multitude of issues that affect its livelihood, including pollution, harvesting of eggs, coastal development and armament (seawalls), commercial fishing nets and gear, predation by raccoons, ghost crabs, birds, and sharks, and weather-related events.

The loggerhead sea turtle can grow to about 7 feet in length and reach a weight of approximately 300lbs, though some have been recorded to reach well more than that. Its range includes the Atlantic and Pacific oceans, the Indian Ocean and the Mediterranean Sea. The turtle reaches sexual maturity in as little as 17 (20 to 30 years is the norm) years and has an approximate lifespan of more than 60 years, though they are known to live longer. The loggerhead sea turtle feeds mainly on invertebrates, including sponges, shellfish, jellyfish, shrimp, squid, and sea urchins.