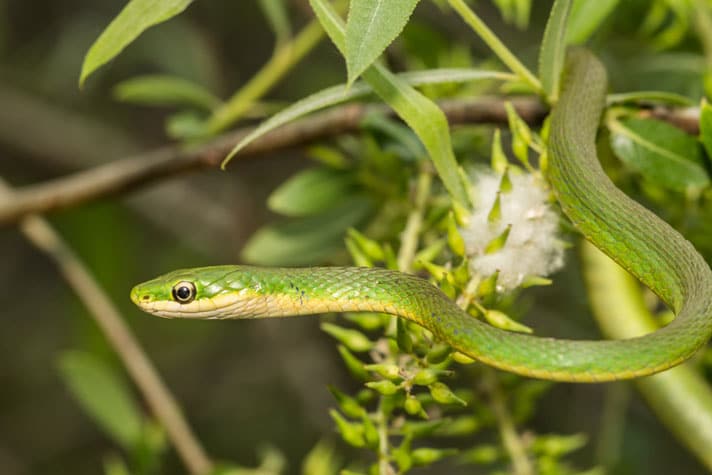 The rough green snake is quite large compared to its smaller cousin the smooth green snake (Opheodrys vernalis) and reaches lengths of 3 feet or better on average but rarely exceeding lengths of forty six inches. Females tend to have a longer and larger body than the males and both genders are brightly colored dorsally in emerald green with a brilliant yellowish wash along the sides and towards the ventral scales and the belly of the rough green snake is yellowish white in color.

The rough green snake can live upwards of 15 years when cared for properly in captivity and can provide its keeper with great enjoyment over this time period. Proper snake habitat products, snake supplies, and husbandry techniques will promote the species to thrive in captivity.

The rough green snake should be given a large spacious enclosure to accommodate its relatively large size and arboreal activity. A fifty five to seventy five gallon tank is suitable for two adults and this enclosure should be heavily adorned with live or artificial plants for climbing and hiding which will make the rough green snake feel comfortable while being able to utilize its brilliant camouflage. Substrate in the enclosure should be in the form of small stone or gravel, such as the Exo Terra Small Natural River Pebbles. This will enable easy cleaning and reduce the risk of harmful external parasites such as snake mites. Dry feces is easily visible on the gravel and should be removed at once.

Rough green snakes are most comfortable when kept within the range of 85 to 88 degrees Fahrenheit and should have a basking light over their enclosure that will enable the snakes to thermoregulate. It is beneficial for the rough green snake to have full spectrum lighting,provided by snake heat lamps such as the Exo Terra Solar Glo All in One Reptile Lamp. This will not only enhance the captive environment and your captive’s natural colors, but it will benefit the snake in its quality of life by balancing the snakes’ psychological well-being.

Food should be offered in the form of soft-bodied invertebrates such as crickets, spiders, moths, caterpillars and soft-bodied beetle larvae. Rough green snakes are also known to take some vertebrate prey such as tree frogs and likely small lizards, proving they do fancy live reptile food at times. Fresh drinking water should be available to your rough green snakes at all times and the captive environment should be gently misted at least once a week to maintain adequate humidity. It is important not to overwhelm your rough green snake with too many live feeders. Too many feeders contradicts what these snakes are used to in nature and it will have the opposite effect often stressing your snake to the point of not feeding at all.

Opheodrys aestivus is a very non-aggressive species of snake and rarely if ever even attempts to bite in captivity. It is however important to keep handling of your captive rough green snake to a minimum because they tend to stress very easily when out of the safety of their enclosure and its dense protective foliage. Remember rough green snakes are designed to be tangled among the leaves and twigs of their natural environment and they know they are invisible there; bringing them out into the open can have very traumatic effects on this species of snake. If you must handle your rough green snake, handle it securely and close to your body, without letting it hang loosely from your hands.

Leo Spinner is owner of The Spotted turtle Herpetological Institute of Cape-Cod www.spottedturtle.net and is owner of Skin & Scales Exotic Animal Presentations www.skinandscales.net. He has over forty years of herpetological experience and divides his time between Cape-Cod and Pennsylvania. Leo Spinner resides on Cape-Cod in Massachusetts with his family.