Residents On Oahu, Hawaii Urged To Listen And Report Coqui Frog Calls The Evening Of Sept. 12

The invasive Coqui frog (Eleutherdactylus coqui), has been making its way onto Oahu over the last 10 years.

The Oahu Invasive Species Committee is asking Oahu residents to set aside the evening of September 12, 2012 from 7:30 p.m. to 8 p.m. and to go outside and listen for the mating call of the invasive coqui frog, (Eleutherdactylus coqui), and they want those participating to use Honolulu's smartphone application, Honolulu 311 to report what they hear. 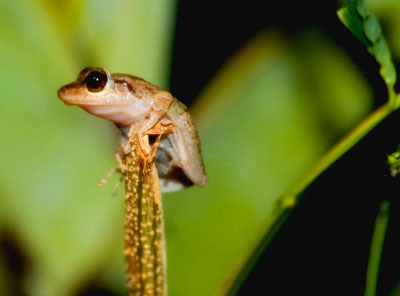 The coqui frog, like most invasive species in Hawaii, has no natural predators and the warm weather likely promotes breeding year round. The state department of agriculture says that some areas of the Big Island have more than 10,000 frogs per acre. And this many frogs can eat 50,000 insects each night. These frogs could endanger native Hawaiian insect populations and can compete with native Hawaiian birds. The frog has been found at sea level to heights of 4,000 feet on the Big Island. On Oahu, the frog has previously been found in five areas of the island; Wahiawa, the Home Depot at Iwilei, Haleiwa, Waimanalo, and Kahaluu.

The coqui frog (Eleutherdactylus coqui), beloved in Puerto Rico but mostly despised in Hawaii due to its high pitched mating call that can often exceed 85-90 decibels (equivalent to the noise of a gas lawnmower), has been making its way onto Oahu from the Big Island, where they became established in the late 1980s.

While the state has tried to eradicate or at least mitigate the populations of coqui frogs on its islands, the United States Fish and Wildlife Service proposed listing the Puerto Rican coqui llanero treefrog (Eleutherodactylus juanariveroi) as an endangered species last year. So while it is invasive in Hawaii, it is scarce in Puerto Rico.

In 2007, the Hawaii Department of Education sponsored a coqui frog killing contest, training students on how to capture and kill these amphibians. Prizes included iPods and xBox 360s to the school with the most number of killed coqui frogs.