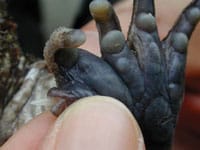 A Japanese frog found on Japan's Amami and Ryukyuk islands has knife-like spikes protruding from pseudo thumbs that a scientist says is used for fighting with other males as well as when mating with females. The rare frog, Babina subaspera or Otton frog is equipped with the sharp appendage on both front forelimbs. 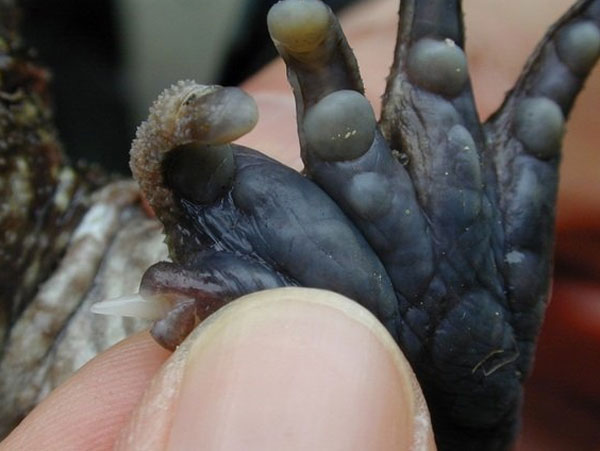 The spiked appendage shown at lef

University of Tokyo researcher Dr. Noriko Iwai believes that the knife-like spikes evolved so that males could grab onto and hold females when mating, and use the spines to fight with other males. Iwai noted in her study published today in the Journal of Zoology that the males wrestle and stab their foes with the spikes. She said that although the spike may have evolved for breeding, it is also being used for combat, as the males would show off their jabbing response when picked up in the lab and the spikes had scars that were indicative of fighting. She noted that the spikes don't cause lethal injuries in the Otton frogs, due to a raised patch of skin on the sides of the frogs that seem to act as a guard against injury, though there is another frog with a similar appendage, the gladiator tree frog (Hypsiboas rosenbergi) that often inflicts lethal injuries during combat. 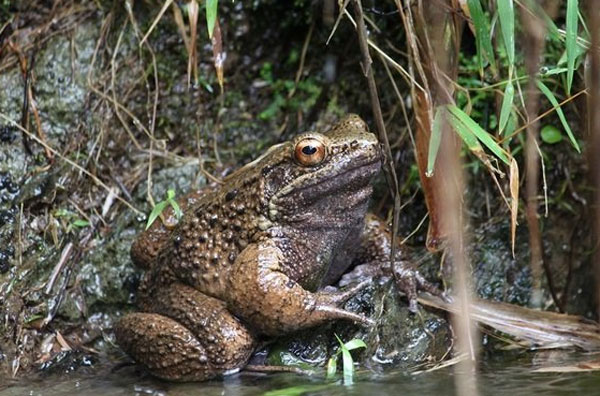 Babina subaspera is listed as endangered and is threatened by habitat loss, road construction, river development, and predation from introduced mongooses on their native islands, Amami Oshima and Kakeromajima in Japan. It can be found in secondary broad-leaved evergreen forests on the islands and breeds in small pools of water.