Zoo had been trying to breed Erpeton tentaculatum for the last four years.

The National Zoo in Washington D.C. got a surprise when a pair of tentacled snakes (Erpeton tentaculatum) gave birth to eight babies last month. The zoo released photos of the babies today.

"Within a few hours of being born, the snakes were already acting like adults," Matt Evans, Reptile Discovery Center keeper said in a statement released by the zoo. "Instincts took over and they were hunting. We don't know much about this cryptic species, but we're already learning so much just watching them grow." 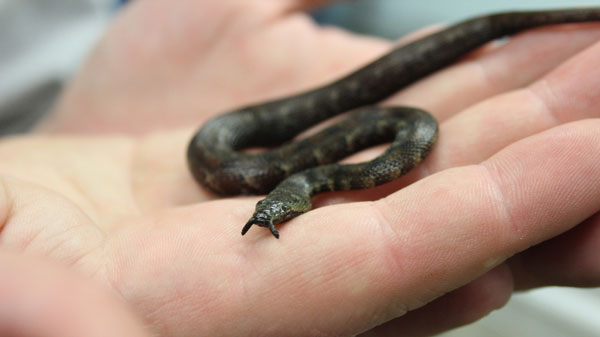 Zoo officials had been attempting to breed tentacled snakes ever since they began caring for them four years ago. The zoo currently has four adult tentacled snakes and the babies are expected to be transferred to other zoos as they get older.

The tentacled snake is an aquatic snake that grows 20 to 30 inches in length. They are native to Southeast Asia and can be found in shallow, still waters, as well as rice paddies. They feed exclusively on small fish and can consume up to 30 fish a week.