The turtle is the state's No More Trash Mascot.

Peanut, a red-eared slider (Trachemys scripta elegans) who is the official mascot of the state of Missouri's Departments' of Conservation (MDC) and Transportation’s (MoDOT) No More Trash! campaign, celebrated her 29th birthday yesterday at MDC's August A. Busch Conservation Area in St. Charles. 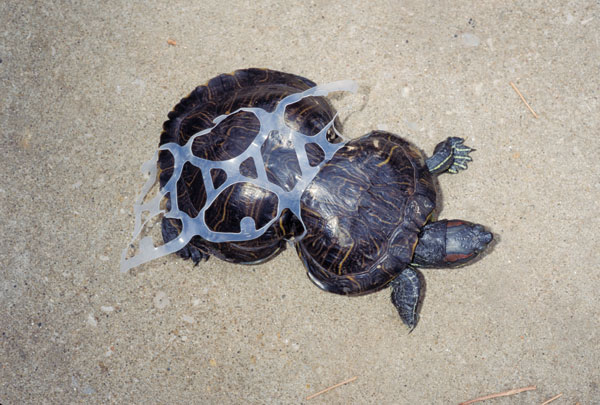 The party organizer, MDC Naturalist Matt Ormsby thought it appropriate given Peanut's celebrity status in the state. “I decided to do a birthday party after working at the state fair and seeing how amazed young adults with families were after hearing that she was 28 years old,” said Ormsby. “Many of them remember seeing her when they were a kid at the state fair or at a school.”

Peanut has been in the care of the MDC since 1993 when she was found with a plastic six pack ring wrapped around her shell. Peanut got stuck in the ring when she was younger, and as she grew, the ring caused her shell to deform into a peanut-like shape, hence her name. She currently lives at the Busch Conservation Area, and when she is not holding court there, she travels with her handlers all over the state of Missouri, visiting schools and fairs where she serves as a reminder to place rubbish in trash receptacles.

The red-eared slider is one of the most popular pet turtles. This semi-aquatic turtle can live more than 40 years and can be found from Louisiana to Michigan and west to Texas, Oklahoma, and Kansas. Read how to care for the turtle here.

Six pack rings have been cited since the 1970s as a dangerous form of litter because of the capability of animals to get caught in them. While the rings are supposed to degrade within 90 days of sun exposure, they can still often end up around the necks and bodies of animals such as turtles, birds, marine mammals and even fish.