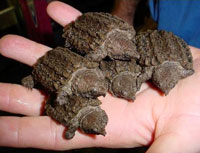 Pontiac Township High School in Pontiac, IL received a $100,000 grant from the State Farm Youth Advisory Board that will go toward the school's Operation Endangered Species and Alligator Snapping Turtle project. The grant will enable the school to acquire more baby alligator snapping turtles (Macroclemys temminckii) and equipment, and assist other schools in the area to get their own projects started.

The program was conceived after earth science teacher Paul Ritter wanted his students to be more active stewards of the environment.
"Allowing them to work on these projects and change the world is the way that we do that," Ritter told the Cambridge Chronicle. "These kids will be changed forever and I am very humbled to be a part of that."

Ritter had been working on an outline for the project for several months when he met reptile expert Dr. Brady Barr of National Geographic at the 2012 Illinois Science Educator's conference. Ritter and Barr came up with a project that would expose an endangered species to students in the classroom while enabling them be the caretakers of the species at the same time. They picked four species and coordinated with the Illinois Department of Natural Resources and eventually picked the alligator snapping turtle. They received four turtles from the Peoria Zoo and are currently housing and caring for them in TetraFauna reptile enclosures. After two years at the school, the alligator snapping turtles will be released into the wild to help bolster the populations of this endangered species.

For more information on the project you can visit the  Operation Endangered Species and Alligator Snapping Turtle project here.

The alligator snapping turtle is one of the largest freshwater turtles in the world. It can weigh more than 150 pounds with carapace lengths exceeding two feet, and can live for more than 100 years. Macroclemys temminckii is an ambush predator that waits at the bottom of bodies of water for fish, amphibians, and invertebrates to swim close enough for them to capture. The turtle often employs a lure that dangles just above its nose to bring prey closer.