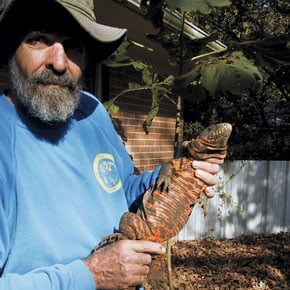 The world loses the lizard man.

Bert Langerwerf, one of the most exciting and innovative reptile breeders in the history of our hobby, passed away August 11, 2008. Bert was well-known for his great sense of humor, and his desire to share his knowledge about keeping and breeding lizards.

Having bred more than 135 species of reptiles, Bert was a true pioneer in reptile breeding. His famed Agama International, a 7-acre farm in Alabama, annually produces thousands of lizards that have made their way into reptilekeepers’ homes throughout the United States, Europe and Japan.

Bert was also responsible for some of our hobby’s most important innovations. Finding that the temperature at which incubating eggs were kept determined the sex of many lizards he produced, he was responsible for early work on temperature-dependent sex determination. Bert also made many early observations about lighting requirements for lizards. Stating terrarium glass filtered out ultraviolet light, he wrote that in the 1970s he realized lizards kept indoors were not receiving the full spectrum of light. Vitamin supplements were also featured in Bert’s early writings. He reported an improvement in lizard health and breeding with their use.

He also excelled at adapting items for his use. “Bert’s ability to scrounge materials with which to construct hundreds of breeding cages, and to collect surplus food for his bug (herp food) colonies, was extraordinary,” said longtime friend Bill Love. “Bert Langerwerf personified recycling and advanced herpetoculture in the process long before it was trendy and necessary for the planet.”

Bert is survived by his wife, Hester; son Aleksis and daughter-in-law, Shae; son Timo and his girlfriend, Isabella; brother Andre; and mother, Coralie Poppelier Langerwerf. Bert leaves mourning family in the Netherlands, and countless friends and colleagues all over the world. His passion has been an inspiration to us all.

In June of 1994 I attended my first International Herpetological Symposium in New Orleans, La., and that was where I first met Bert Langerwerf. Bert was friendly and eager to share his knowledge about breeding lizards and other herp topics, and soon after our meeting he was writing for REPTILES. Bert was the first to breed the super mealworm (Zophobas morio), and he was anxious to tell people about it. Thus, his first article, “Super Mealworms,” appeared in the October 1994 issue.

Bert pitched many article ideas over the years, and we were always happy to hear from him. Editing Bert’s articles could be a challenge. In early years they would show up written in longhand, sometimes in outline form. So we’d decipher his handwriting and type his words into our PCs. Typically we don’t accept handwritten articles, but Bert was a legend, and his REPTILES contributions were something special. They were always packed with useful information, and readers loved them. His last article for us, “Totally Tegus,” appeared in the June 2008 issue.

Over the years I saw Bert regularly at the National Reptile Breeders’ Expo. I sometimes wondered how we appeared when we met. I had to talk really loud because Bert was hard of hearing, and I also frequently asked him to repeat himself because of his Dutch accent. Always ready with a huge smile, he never changed, remaining one of the friendliest herp people I’ve ever met.

At the 2006 NRBE he suggested that he and I take a train trip across Europe to visit with different reptile breeders. He thought it would make a great article. It probably would have.

I will miss Bert Langerwerf, a true gentleman and forever a titan in the herpetological world.