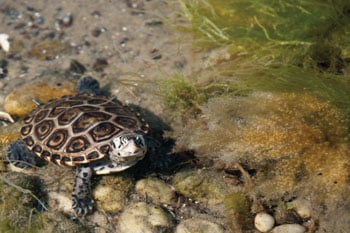 CITES, also known as the Convention on International Trade in Endangered Species of Wild Fauna and Flora, is an international agreement initiated in 1973 and is currently signed by 178 countries (also known as Parties) regulating global trade in imperiled wild animals and plants, including their parts and products. CITES is administered through the United Nations Environment Programme (UNEP). A Secretariat, located in Geneva, Switzerland, oversees the implementation of the treaty and assists with communications between countries.

A meeting of the Conference of the Parties, or CoP, is held every two to three years to review, discuss, and negotiate changes in the management and control of trade in the various wildlife species covered by the agreement. In the United States, the implementation of CITES is the responsibility of the Secretary of the Interior, who has tasked the U.S. Fish and Wildlife Service (Service) as the lead agency responsible for the Convention’s implementation.

Species protected by CITES are included in one of three appendices:

At the recent Conference of the Parties (CoP16), held in Bangkok, Thailand, last March, CITES Parties voted to increase protections of many Asian freshwater turtles and three species of North American pond turtles, as indicated in the following lists. These new CITES listings went into effect on June 12, 2013.

The following reptiles and amphibians were added to Appendix II: 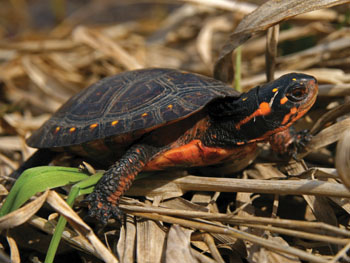 Why Were So Many Turtles Added to CITES Listing?

Turtles are considered to be some of the world’s most endangered vertebrates, with almost half being categorized on the IUCN Red List of Threatened Species as critically endangered, endangered or vulnerable. They are at high risk of extinction because of their combination of biological life history traits (including adult longevity, late maturity, limited annual reproductive output, and high juvenile/egg mortality). Collection for trade as well as habitat degradation and loss are their greatest threats.

The listing of the three native U.S. turtle species-the diamondback terrapin, spotted turtle and Blanding’s turtle-resulted from proposals submitted by the United States, based on public comments, range country consultations, and recommendations from the 2010 Workshop on Conservation and Trade Management of Freshwater and Terrestrial Turtles in the United States, held in St. Louis, Mo.

At that meeting, state resource managers, turtle specialists and CITES experts from the Service discussed trade pressures on native turtle species and the documented pattern in which Asian species are becoming increasingly depleted and trade is shifting to species native to the United States. To address this growing problem, the U.S. proposed to list these turtles in CITES Appendix II, which allows for commercial trade when it is shown to be both legal and biologically sustainable. 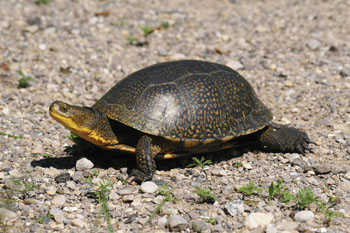 The listing of the Asian turtle species resulted from proposals submitted by the United States, China and Vietnam based on public comments, range country consultations, and on recommendations from an international workshop on the Conservation of Asian Tortoises and Freshwater Turtles: Setting Priorities for the Next Ten Years, which was held in Singapore in February 2011. Nearly 70 delegates from 17 countries, including 14 Asian nations, attended. This was a follow up to the Asian turtle meetings convened in Phnom Penh, Cambodia, in 1999, to discuss the plight of turtles since that initial effort. Significant strides have been made since the 1999 workshop; however, the trade in wild-caught turtles and turtle products (e.g., meat, shells, eggs and cartilage) is still the number one problem facing global turtle populations today.

What Do the New CITES Listings Mean to Herp Owners?

Unless they are moving animals across an international border, these listings will have little effect on the average hobbyist or pet owner. If you do own any of the newly listed species and plan to travel internationally with your pets, please refer to the Service website "Personal Pets” section found here: /redirect.aspx?location=fws.gov%2finternational%2fpermits%2fby-activity%2fpersonal-pets.html.

What About Reptile Importers and Exporters?

Animal importers and exporters need to obtain proper legal documentation before importing and/or exporting CITES-listed species. The backbone of CITES is the permit system that facilitates international cooperation in conservation and trade monitoring. Permits are issued only if a country’s Management and Scientific Authorities determine that trade is legal and does not threaten the species’ survival in the wild. The use of standardized permit forms allows inspection officials at ports of export and import to quickly verify that CITES specimens are properly documented.

Appendices I, II, and III species require applicants to submit standard application forms and fees to USFWS in order to obtain CITES export/import permits to move specimens across international borders. Permit systems also facilitate the collection of species-specific trade data, which are used in the creation of annual reports. These data are used to determine trends in trade and ensure that trade in wildlife is sustainable. This trade monitoring has created a substantial body of information on the management and use of CITES species worldwide. Importers and exporters, please make sure you apply for the proper permits before shipping your animals.

For additional biological and trade information on freshwater turtles and tortoises, please visit fws.gov/international/cites/cop16/turtles-and-tortoises.htm
To learn more about the Asian freshwater turtle and tortoise proposals that were submitted for consideration to CoP16, please refer to the USFWS fact sheet at fws.gov/international/cites/cop16/cop16-asian-turtle-proposals-factsheet.pdf
For details about permit application forms, visit www.fws.gov/international/permits/do-i-need-a-permit.html
For more information about CITES and what species are found on the Appendices, please refer to www.cites.org/.
If you have questions or seek further information, email scientificauthority@fws.gov. REPTILES