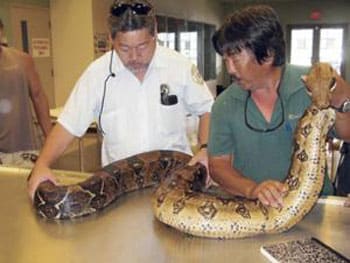 There are no native land snakes in Hawaii and keeping them is illegal.

It appears another snake has been found in Hawaii as a motorist traveling on O'ahu's Pali Highway reportedly ran over a five foot long snake Sept. 22. The man pulled over and picked up the snake and turned it in to the Hawaiian Department of Agriculture (HDOA), which identified the snake as a boa constrictor (Boa constrictor). Inspectors with the department returned to the scene but didn't locate any other snakes, according to a report on KHON2.

"Any snake found in the wild in Hawaii is of serious concern,” Russell S. Kokubun, chairperson of the Hawaii Board of Agriculture told KHON2. "Boa constrictors may grow up to 12 feet, which is particularly troubling for nearby residents and for the environment.” 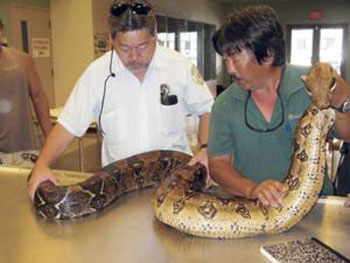 This Boa constrictor was captured in 2011 by pig hunters near a state prison in Hawaii. In the last few years, three boa constrictors were found in the wild on O'ahu.

The possession and transportation of snakes is illegal in Hawaii and is a class c felony, but that hasn't stopped some folks from bringing them in as pets. The state has an amnesty program that enables anyone in possession of snakes, large lizards and other species that are illegal to own in the state, to turn them into any HDOA office, the Honolulu Zoo, Panaewa Zoo in Hilo or any Humane Society. Those convicted of possessing or transporting illegal animals are subject to a $200,000 fine and up to three years in prison.

In recent years, large constricting snakes have been turning up on O'ahu. In July 2011, pig hunters captured a nine foot boa constrictor near Hawaii's Waiawa Correctional Facility in Honolulu. A four foot black rat snake (Elaphe obsoleta) was found on a concrete barrier on a road and a five foot boa constrictor was found in a fire damaged home that same year. IN 2012, a six foot boa constrictor was killed in a field in Central O'ahu and turned into the HDOA and a dead and dried out garter snake (Thamnophis sp.) was found in a Waikiki hotel. In May 2013, a foot-long ornate tree snake (Chrysopelea ornata ) was captured by military personnel at Joint Base Pearl Harbor-Hickam. Also known as flying tree snakes for its ability to jump from branch to branch, the ornate tree snake is mildly venomous and is of the same family, Colubridae, of the brown tree snake that has decimated the bird populations on Guam.