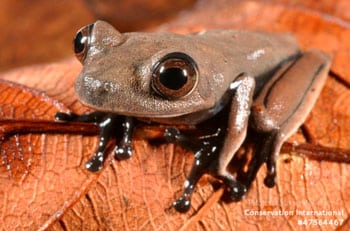 The frogs and a host of flora and fauna were discovered during a three week Conservation International Expedition.

Scientists on a trek to the mountainous region of Southeastern Suriname have discovered several potential new species of frogs in a rainforest that has been virtually untouched by humans. The three week expedition in 2012 yielded six potential new species of frogs, including a chocolate colored frog that has been named the cocoa frog (Hypsiboas sp.), brown and white colored poison dart frog (Anomaloglossus sp.), and a snouted treefrog  (Scinax sp.).

"Suriname is one of the last places where an opportunity still exists to conserve massive tracts of untouched forest and pristine rivers where biodiversity is thriving," said Dr. Trond Larsen, a tropical ecologist and Director of the Rapid Assessment Program at Conservation International. "Ensuring the preservation of these ecosystems is not only vital for the Surinamese people, but may help the world to meet its growing demand for food and water as well as reducing the impacts of climate change.” 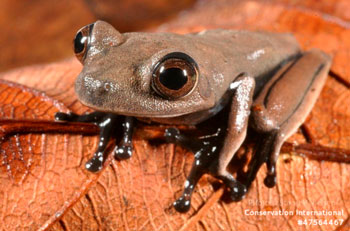 According to a press release put out by Conservation International, the scientists surveyed four sites in the region of the upper Palumeu River watershed, collecting water quality data as well as data on 1,378 species of plants and animals living in the area, many of them considered to be new species. The team recently published their report, "A Rapid Biological Assessment of the Upper Palumeu River Watershed (Grensgebergte and Kasikasima) of Southeastern Suriname." It can be downloaded here in PDF format.